Bombs (and the art of making them) add a little more variety to your repetoire, both offensively and defensively.

In order to make a Bomb, you combine three ingredients, as casing, an effect, and gunpowder (which determines the radius and strength of the chosen effect).

The following are unlockable ingredients for purchase via the Piri Reis challenge missions, but can also be found in chests, looted from enemies, and bought in finished bomb form from Black Market Vendors around the city.

Tenchu anyone? These Bombs disperse sharp shards of metal, damaging and slowing all who pass through them.

These Bombs afflict all in their radius with a more potent form of the poison used in the darts and blade.

Used to move guards away from their posts, and cause them to get into conflicts with other factions through a loud sound.

These disperse fake coins which quickly attract a crowd.

The most instantaneously dangerous of all the bombs available, Splinter Bombs can be used to wipe out a group of enemies all at once.

Despite the name, they act more like landmines. Place them in choke points and carefully lure guards over them.

Lamb’s Blood Bombs will confuse enemies, making them think they’ve been injured horrifically by the explosive, giving you a chance to attack or escape.

Skunk Oil will very quickly disperse a crowd away from an area or a marked target.

Resin-coated packages will allow you to stick any kind of Bomb onto a target with a 5 second fuse. 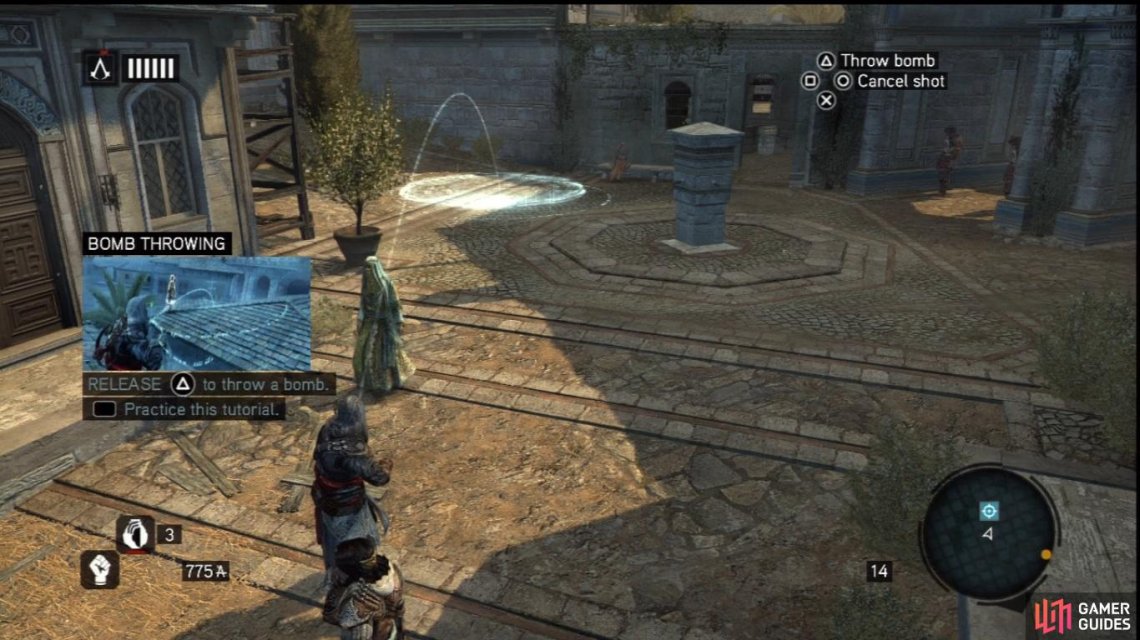 Perhaps the most useful combination of bombs for each of your three slots are: Sticky Splinter Bombs (Lethal)- More accurate and easy to place versions of the Impact Splinter Bombs, although they are expensive they’re worth it when you can land one on a guard and be guaranteed to get the whole group when you make them with the high-radius British Gunpowder. Impact Smoke Bomb (Tactical)- Instant cloud of smoke when used, meaning they can be used to both lure and obscure (when dropped at your feet). Fuse Cherry Bomb (Diversion)- The short fuse allows you a few seconds to get into position to sneak past distracted guards.