There’s more than one way to bring down a Templar

Although you can chain strikes together, most of the enemies in the game will try and guard against your attacks, and some of them are nimble enough to evade everything you try. The easiest way to fend off attacks from a group is to simply hold in the block button (R1/RB) and bide your time. When you see a Templar about to strike (and when their health meter flashes white), get ready to press the attack button. As their strike is about to land, press the attack button to initiate an instant kill attack. You can then push the stick in the direction of another enemy to highlight them (during the animation of the counter) and tab the attack button again as the previous counter finished to chain an execution onto it, bringing down a second target. This can be repeated endlessly to set up a streak of executions, and executions can actually kill enemies such as the stronger Almogavar axemen in a single move. Executions can also be chained onto Spearmen, who normally cannot be conventionally countered.

Important to note things are than if you counter with your fists, you will disarm the target. Chaining a streak from a disarm will execute the targeted enemy with their own ally’s weapon.

Also, Janissaries (in particular those armed with a pistol and a face mask) will require multiple counters/executions to bring down. So, in theory, you can chain a counter off of one (even if it doesn’t kill them) into an execution streak, repeatedly attempting to execute them and another enemy, alternating between the two until their 'lives' have run out.

Executions and Counters are faster with the Dagger and Wrist Blades, so if you need to take out a group quickly those are your best bets. However, the window for timing your counter is less forgiving than with the Sword, and you can’t block as well so you’re likely to take damage if you mis-time your movements.

Also, as of Assassin’s Creed: Revelations, the addition of the hookblade adds some new Counter/Execution moves to your arsenal. You can press Triangle/Y to do a Counter-Steal, in which Ezio pickpockets the target mid-fight leaving them confused and open to further attacks. In addition, Circle/B will allow you to throw your target to the ground, putting them out of the fight non-lethally. You can also press and hold Circle/B on a counter to hook and run. 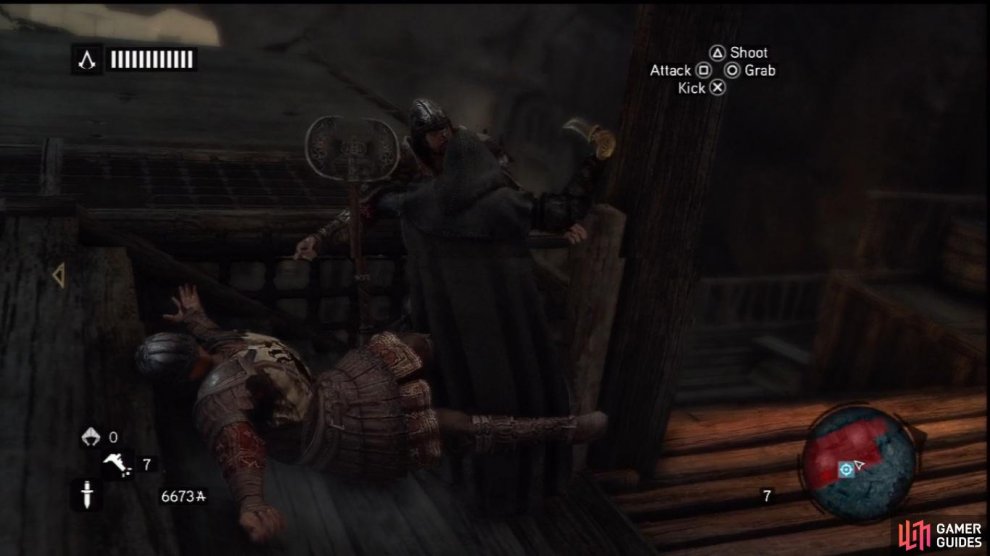