This Memory acts as the tutorial for the new Den Defence minigame. As it explains, you place units on rooftops and on street level to fend off waves of advancing Templars. Start by placing Assassin Leaders on at least two of the available rooftops, preferably those furthest from the den. Next, place a few crossbow men on one of the rooftops that you’ve unlocked, and wait for the first Templars to arrive. Press and hold the indicated button to lock on and fire your wrist pistol at them, marking a particular group for targeting and also hopefully scaring them off or at least slowing them down. Each kill will net you a bonus point which can be used to spend on more units along with the points generated by your Assassin Leaders. Once you gain the ability to place barricades on the street, prioritise getting at least 4 barricades down in a row, preferably with the first one upgraded, as the final wave of the onslaught will feature a powerful battering ram, easily capable of breaking through them. Place riflemen as soon as possible, they are much stronger than the crossbowmen but cost 5 points more each. You can also ‘sell’ your deployed units for a fraction of their cost if you urgently need more points to spend on barricades, for example.

The L2 or Left Trigger button fires a cannon blast at the designated area. Press it once for a small, accurate strike best used on a single wave of enemies, or press and hold it for a 3 cannon barrage. 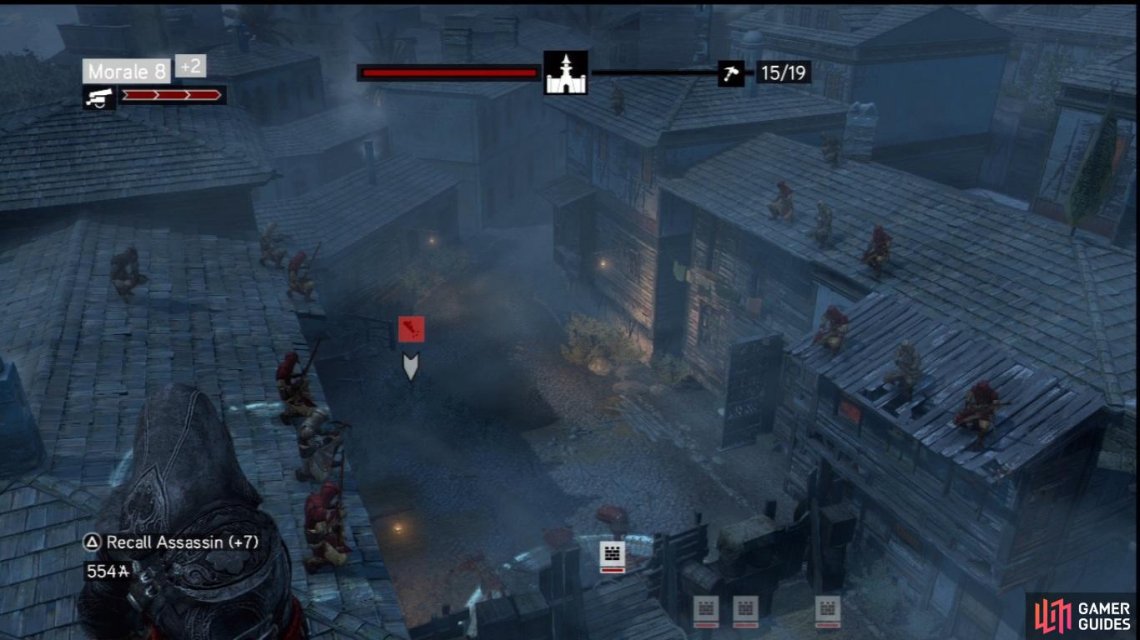 Building as many barricades and riflemen as possible is the key to success in every Den Defense you do! Just remember - if you want a high score don’t use the cannon!

This Memory is the best opportunity to grab the Iron Curtain Trophy/Achievement. If you want to do so, simply defend the den without using the cannon and don’t let the den take any damage. As above, the secret to easy den defence is to place barricades to stall the enemy as often as possible, and use riflemen for extra damage to the siege engines that make up the final wave. You can press the Circle/B button to loot the glowing bodies of fallen enemies for money, bomb parts and morale points too.

After successfully repelling the Templars, you’ll receive a reward of rare bomb parts, money and experience for your Assassin Apprentices - but this comes later. For now, savour your victory over the Templars!

Perform a perfect den defense without using the cannon.