Now that the Imperial North Den is secure, Yusuf is happy to teach you a little bit more about bombs and Bomb Crafting. As the demonstration explains, you combine three ingredients to determine the characteristics of the bomb - first the casing, then the gunpowder (which controls the size and scale of the detonation) and finally the most important ingredient, the effect. The tutorial has you produce some Splinter Bombs and then test them out in the VR bomb room. Practice throwing the bombs from a distance by locking on then hitting the ranged weapon button, as well as manually aiming them. Being able to hit a distance target with an offensive bomb as well as being able to use the aiming reticule to throw and distracting bomb is a valuable skill for some of the later and more difficult memories. Thankfully in the VR room you have unlimited bombs, so feel free to get some practice in before heading out to meet Piri Reis. 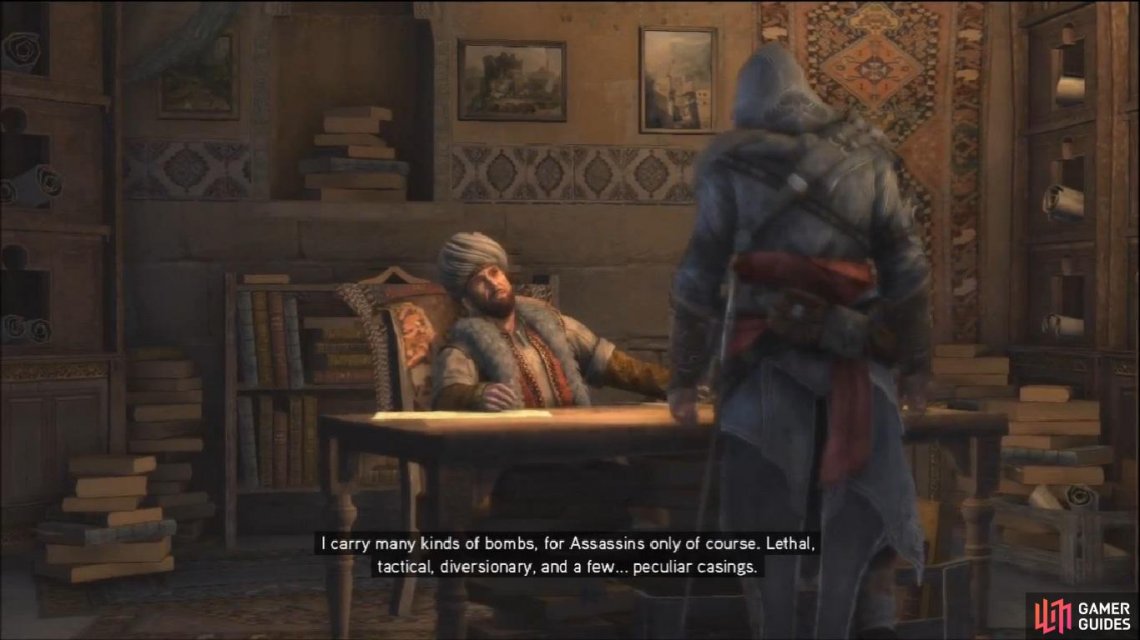 Head to the Bazaar to find Piri Reis’s shop and introduce yourself. He’ll inform you of the location of the Polo trading post, as well as talk a little about bomb crafting.

Here you can also unlock rare bomb ingredients for purchase by completing challenge missions to earn the right to use the more complex ingredients from Piri Reis, the master bombmaker. To play them, interact with the paintings to Reis’s right.

Check out the Piri Reis Mission section in Secondary Memories for walkthroughs of all his optional challenges.