With your new Janissary costume, you can get closer to your target – Tarik, the corrupt leader of the Janissaries. Stay blended with the group of Janissaries, who will take you to the camp. When you have to, beat up the civilian who throws a rock at one of them to keep your disguise intact. When you reach Tarik’s camp, be careful and stay away from the normal Janissary guards (not the ones you’re disguised as, the mask-less green armoured ones) as they will be on alert, suspecting an intruder in disguise. To get past the first area, join up with the two patrolling Janissaries and let them bring you through into the next area. Make sure to move with them as the autopilot movement can sometimes break or cause you to bump into someone, causing an alert.

In the second area, leave the group and move into the conversing group on the right hand side. Wait for the patrolling guards to move away then walk to the bench and sit down. When they pass you again, move to the wall in the corner and start to climb. You’ll probably be spotted, but if you get out of sight quickly nothing should come of it.

When you reach the top, you’ll be able to see your objective – Tarik’s tent. Jump down when nobody is looking and hide near the tent. Watch the conversation scene between Tarik and his subordinate, and then you’ll have to take him out. When the scene ends, you’ll be in front of a crowd of Janissaries and guards with Tarik pacing in their ranks. For full synch, head around the crowd to the right when the patrolling guards aren’t looking and climb the tower (keep an eye out for the Ishak Pasha Memoir page in the corner if you want it, as well as the treasure chests!). Climb up the scaffolding and along the wall above Tarik, and then get ready to leap onto him. Lock on and when he comes near, Air Assassinate him to complete the Memory. 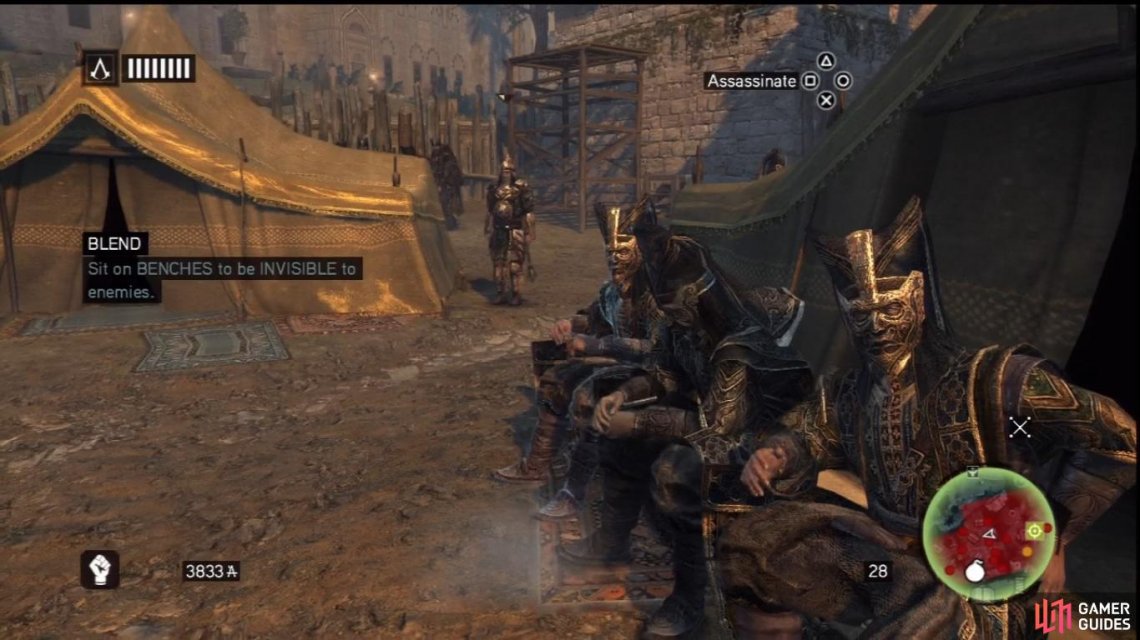 Use the benches and groups to avoid the gaze of the elite guards.