Head inside and through the hallway, and interact with the grating on the floor. Follow the path onwards to the gate, similar to the hidden doors from other secret areas, and then interact with it to see your next platforming challenge. Start by using the switch to the right, which starts a timed mechanism, granting you 30 seconds to reach the next switch.

Run forward to the north and climb that wall. Turn left and hop across the tops of the small stone walls until you reach the larger platform where the device is. Interact with it and watch the following scene closely for the next part of the route. After that, jump straight ahead to the ridges on the floating stone. Climb down using the left stick, then jump straight across to the one you were just standing on. Climb down further, shimmying a bit to your left. This leads to a platform with a corridor on your left, down below. Drop down here and jump between the beams and poles to the next switch.

Activate it, and then run straight up the wall on your right. Jump away and swing across the pole. Keep going this way, and be sure to use the hookblade long jump to reach the lantern. Eventually you’ll make two lefts and reach the switch. Two jumps to the west will land you at the next switch. Use it, and yet another timed mechanism will be activated.

When you regain control of Ezio, jump straight ahead and climb up. You’ll hop across a few narrow ledges to a platform in the corner. Turn right here and do a few more jumps, turning right again after that. Jump across the small ledges above the water, leading to a column. You can climb this, so do so carefully. When you reach the top, shimmy around to the left and jump to the second stone column. Shimmy to the right and jump away again. Hop across these ledges to the next switch.

The next switch will be right in front of you after watching the next scene across the metal flooring. Use it and then jump straight ahead to the hanging rock with the ledge to grip onto. Shimmy around and jump straight across. Climb up and take this narrow ledge to a swing pole. Swing across to another narrow ledge and then take that to a wall to climb up. Climb up and shimmy to the right, jumping to a beam when you can’t go any farther. Go across these beams then turn right on the last one and you’ll see the goal is not too far. Jump from the beam to the pole and swing down to the central switch on the floor. Press it (and give it a kick).

Now for the last hurdle! Climb the rock in front of you, go to the left and jump across to a hanging rock platform. Climb up it, and then jump to the following wall straight-on. When you reach the top, head left then climb another hanging rock, then another. At the very top, it’s just one final leap across to the key platform – make sure to extend your hookblade just in case for that extra reach. Loot the chests and grab the fourth Masyaf Key to end the Memory. 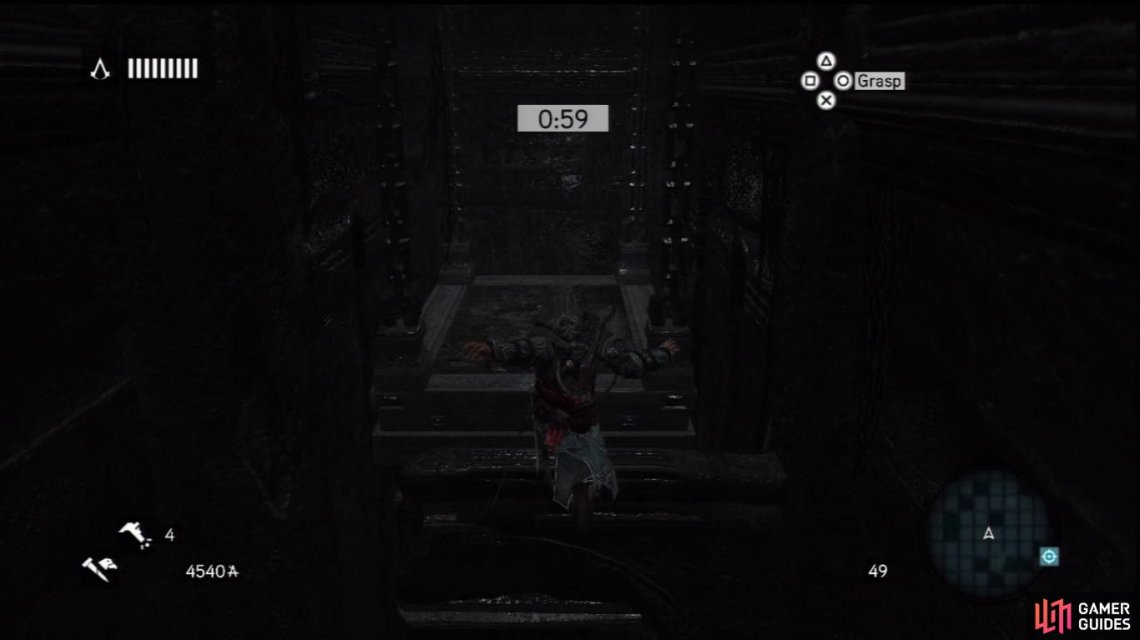 The timers are fairly generous, just take care to angle your jumps carefully and you’ll make it in time with ease.