You may get a vague sense of déjà vu at the beginning of this Memory, but you should be able to remember what to do. Concentrate on pushing the enemy carriages onto the rocks rather than actually winding up and hitting them. As long as you avoid the rocks yourself the enemies will eventually damage themselves enough that they are out of the fight, too.

Once you’ve taken out the two guard carriages, you’ll be left facing Ahmet. Hit the button the game prompts you to in order to open your parachute, then take a few seconds to get a feel for how it controls. Basically, from now on, you have to avoid trees and buildings while protecting Sofia from harm. Remember if you take too much damage you can just use medicine to heal yourself, so make protecting her and the carriage your top priority. Horseback Templars will attack her, and you’ll need to assassinate them one by one with the swooping assassinate attack. Alternatively, if you have good aim, you can grab and throw a Templar at another horseman, taking out two in one fell swoop (no pun intended).

There are at least 30 Templars in the section that you can take out, and as long as you keep using the methods available to you at every opportunity you should be able to get enough to meet the full synchronisation requirement with ease.

After the cutscene, you’ll have to hold R1/R to block, even though the game doesn’t immediately tell you to. When you roll over and Ezio is on top, press the attack button to land punches on Ahmet as you fall. It’s quite hard to lose at this stage, just keep hitting him and you’ll be rewarded with a cutscene and the end of the penultimate sequence. 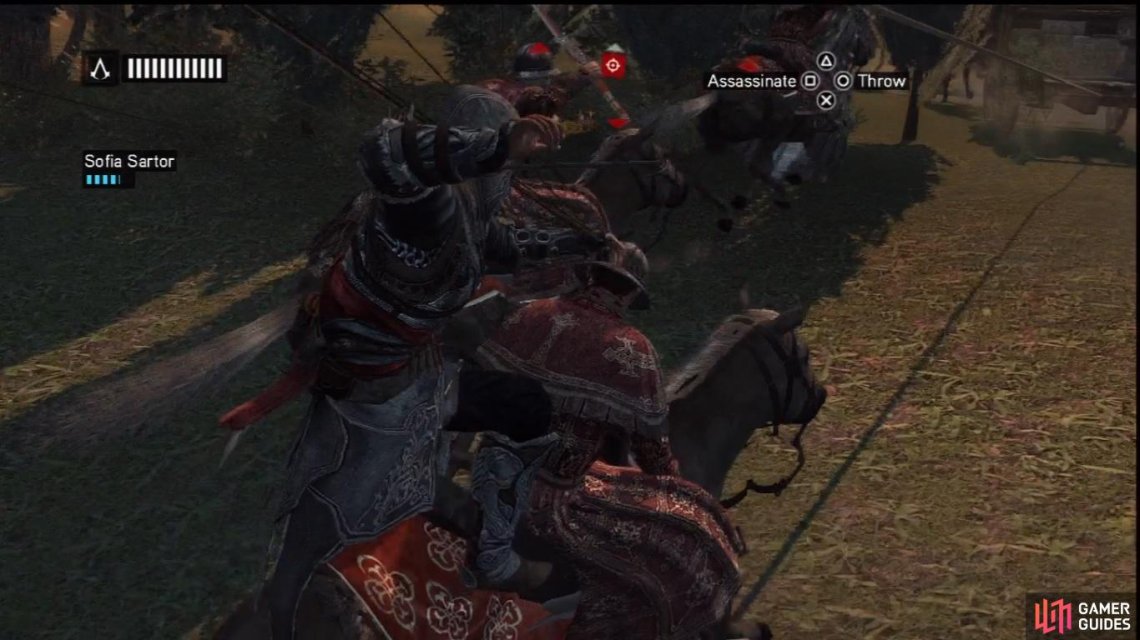 Use the assassinate and the throws to clear out the Templars threatening Sofia!