There’s plenty more guards for you to sink your blades into on the way to the fort. Down the hill there are two patrolling guards who stop behind the stack of boxes. Dive into the bushes a little way down the hill and wait for them to move up the hill. Jump out and double assassinate them where they stand. Turn around and take out the lone guard at the camp where you started.

A further two guards are patrolling ahead so dual kill them as well and head into the underground tunnel. It looks a bit like a mine entrance. Follow the tunnels and slide under the parts you can’t get through. Jump the chasm and keep going until you see guards on your radar.

Run up enough so the first guard spots you and then move back to make him follow you. Stand at the corner and when he approaches, take him down. The guards are pretty gullible in this game. Go into the room and turn right to the edge of the wooden balcony. Look down to the guard and assassinate him when he moves beneath you. Stand behind the boxes to watch the other guard’s movements. 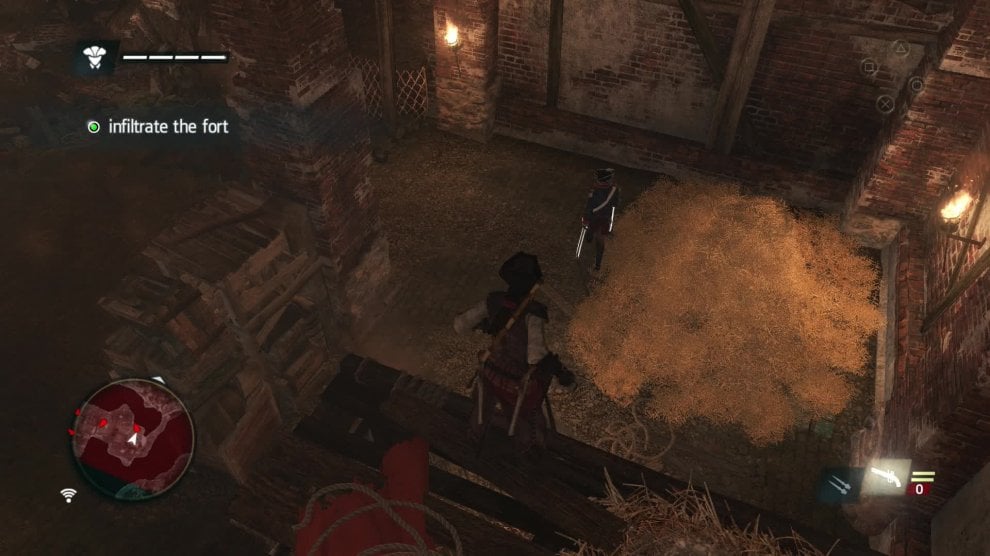 He will probably notice the corpse on the floor and walk over to inspect it. When he does, jump out and kill him. Go through to the next room and kill the guard patrolling here. Be aware of the guard above you who may see you. Either way, climb up the ladder and kill him. Run round the balcony where he was patrolling and down the stairs. Another guard will be stood around here so approach him from above. Use the wooden platform above his position as a good way to do an aerial assassination.

Jump in the hay as there are two more guards in the next room who will probably notice the dead body and come over. Drag one of them into the hay and then spring up to kill the other. Once they’re down, climb onto the wooden walkway, jump across to the platform and then to the other side. There is another guard here and one patrolling the opposite walkway. Murder them swiftly and move on to the next room.

Two guards will be stood with their backs to you so equip the hidden blades and send them to their deaths. Use the lift to get up to the next area and quickly jump into the hay pile. Wait for the nearby guard to face away from you and then run out and remove him. One guard patrols the walkway above you and another patrols the bottom in front of your position. Kill the guard at the bottom (watch out for chickens!), run up the stairs and take out the next one. 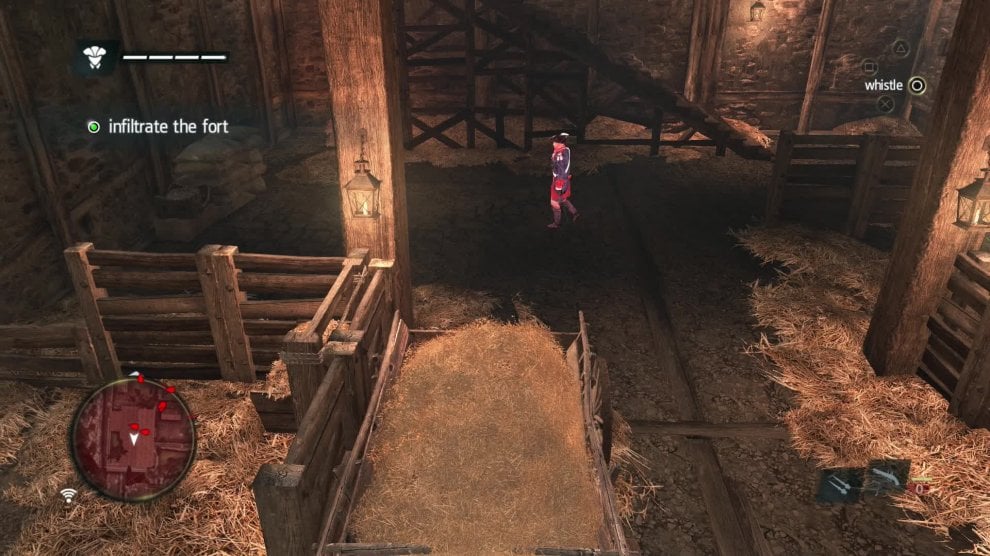 Find a way into the jail

Perform an aerial assassination on the two guards below you then run up the stairs on the right. KIll the guard wandering on the walkway and jump down from here to the next area. Cut the alarm bell just to be safe then find the two guards walking in the direction of the marker. Kill them and run up the path till you see a hay pile. Jump in here to watch the next two guards. They will move back towards your position so take this opportunity to dual kill them.

Stab the guard near the next alarm bell and then sabotage the bell. Run up the stairs and use the trees to hop onto the house at the other side of the fence. Dive into the haybale below and then launch yourself at the two guards here. As you walk through to the jail entrance, there are two gunners here that you must kill for a scene. 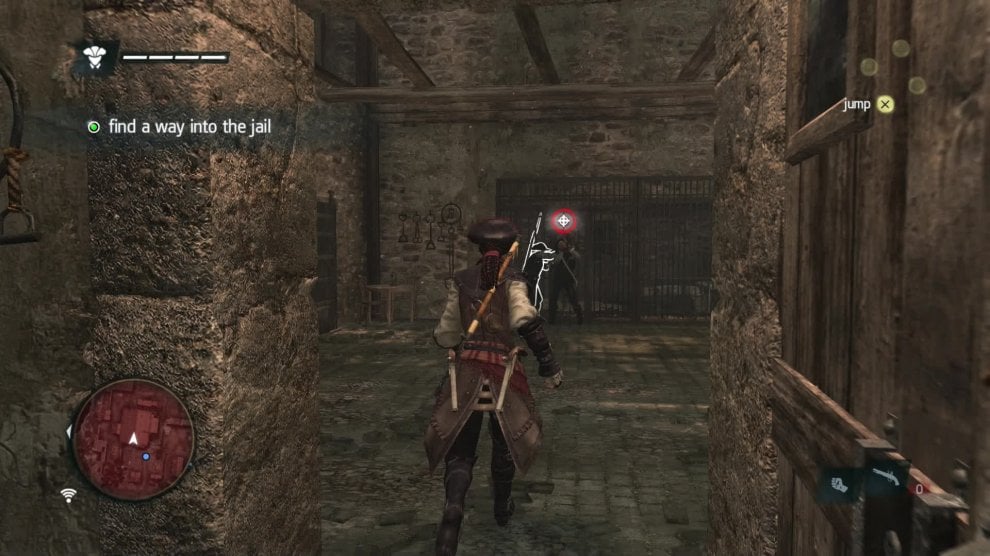 Catch up to Patience

Patience isn’t very..well, patient. She runs off before you can stop her and more guards have moved to try and stop you both. Don’t stop to engage them but instead run up the ladder, head right through the open door and jump out into the courtyard. Follow her round the corner, up the path and round to the right into another courtyard. 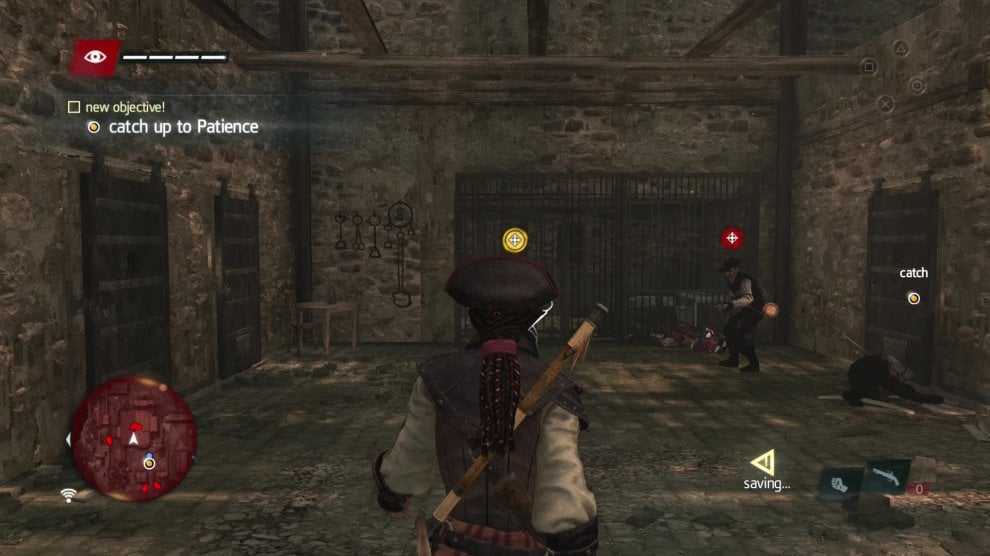 She now decides to stand and fight and you must help her. She’s a picky one, ain’t she? Thankfully, Aveline is a badass fighter and can easily stop anyone that approaches. Use your pistols and macheté to hack away at the guards. Always counter where you can and use any guards as human shields if you get a chance. Once they’re dead, Patience will run off again. Stay still woman! Chase her a little way until she stops and a cutscene plays. 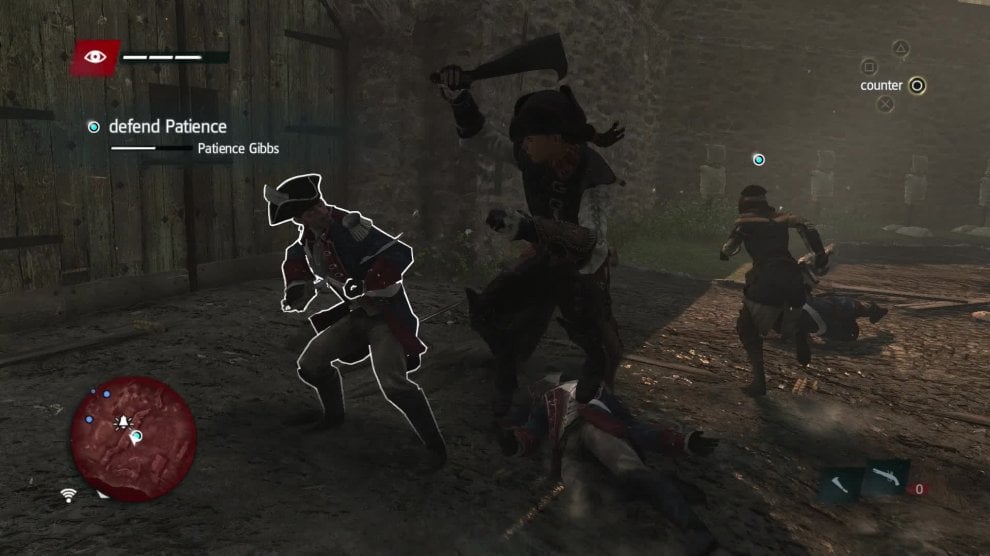