The optional objectives are easily achieved at the start of the mission. Simply focus your spyglass on the fleet, notably the Man O’ War, to complete the first one. The second one can be completed by simply launching a mortar attack on one of the ships as soon as you are in range. Both objectives should pop up completed, leaving you free to focus on disabling the Templar ship and his friends.

Start by launching mortars at the support ships. One accurate mortar will sink the ship with ease. It is best to take out the support ships before you focus on the flag ship because they can become a nuisance otherwise. If you run out of mortars, close the distance to the support ships and unleash round shot or heavy shot when in range. They will sink in one burst.

Now, turn your attention on the Admiral’s ship. This one has a little more armour and can take a bit more of a beating. It also fires off mortars so keep an eye out for the tell-tale yellow and red water and avoid that at all costs! Try and turn your hull on the back end of the ship and let off a few rounds of heavy shot. Use the swivels on the weak points and that should be enough to disable the ship. Finally, board the ship when you are within range. 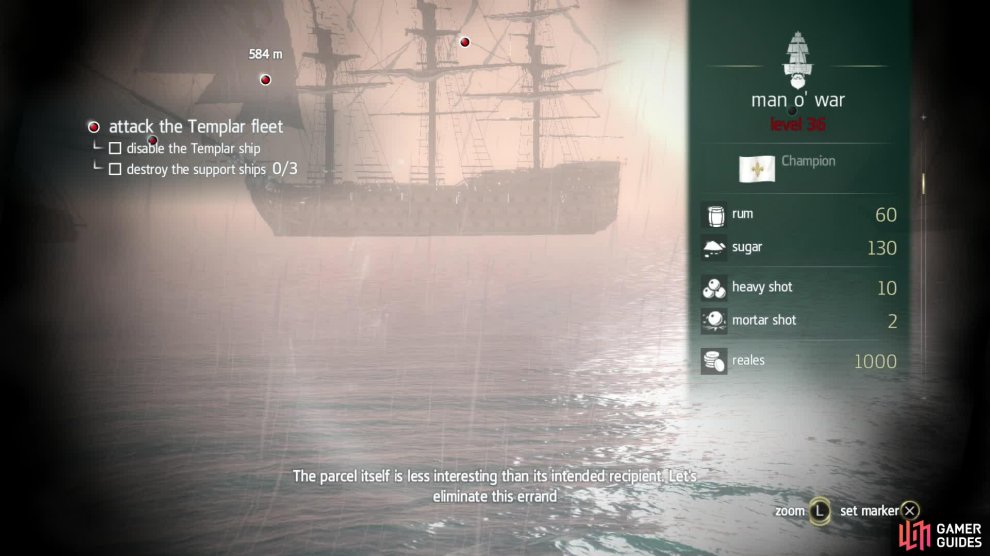 You only need to kill 10 crew, 2 officers and the main captain so set about diminishing their numbers. Use the swivel gun as you rope them in to clear out a few of the crew before you start and simply finish the others off however you see fit. Make good use of counter-attacks and remember to break the defenses of the tougher enemies before trying to attack them. After the last man is down, go below deck.

Now you need to kill the Admiral. Use a smoke bomb on the group of soldiers that rush you as you enter and then one on the Admiral himself. You can kill them all in one go without getting into a protracted fight. Take the package when prompted and return to the ship for a scene. 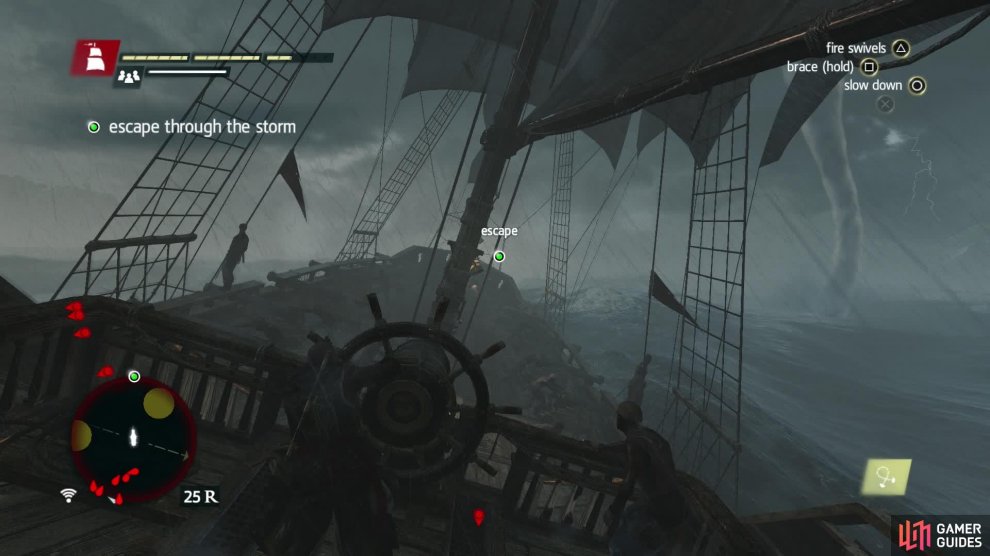 French vessels will try to stop you and a storm has also come to play. Adé decides he will take the risk through the storm so head towards the marker. Avoid waterspouts (the yellow swirling circles on your minimap) and if you see a wave icon on the map, find the wave and meet it head on with your ship. This will avoid any hull damage and will keep you ahead of the enemy vessels. Your enemies will not be able to fight the storm and so you will lose them eventually. Keep fighting to the green marker to end the mission.