You must now find a person on the plantation. This is a restricted area and is teeming with guards. Should any spot you, they will start killing slaves as punishment so obviously, you’ll want to stay out of sight. Thankfully there are plenty of hiding places to move through and help you pick off the overseers one by one. There are many slaves to be liberated on plantations so they are a very good way of “farming” for slaves and to boost the number of slaves you have rescued. You must kill 20 overseers in order to empty the plantation and save the slaves.

Start by running to the hiding spot near the wall on the right. From here you have a good vantage point to check for guards roaming around. Tag as many as you can with Eagle Vision and then wait for the patrolling guard nearby to move off to the right. Run down the slope and hide in the bushes here. A green circle showing the contact’s general location should appear now.

Head over in that direction, whilst also checking for that patrolling guard. When the opportunity presents itself, creep into a bush near him, whistle to draw him over and remove him from the earth. Move up to the next bush just past the alarm bell on the left and enter Eagle Vision. There is a guard just down the hill and you will also find the contact.

After finding the contact, you must approach them to interact and Adé will sing the code to her. Before you do that though, dispatch the nearby overseer. Interact with the contact for directions to the Maroon hideout. 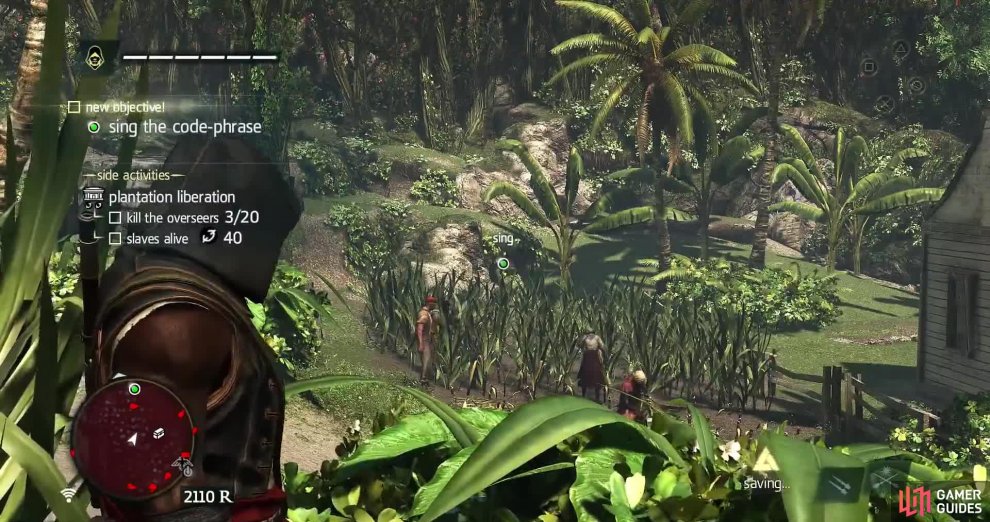 Move through the bushes to the left of the house and then run to the sugar canes in the next section. Whistle the nearby guard over and take him out. Next, there will be a guard stood in front of a well that will need killing too. Run up behind him, jump inside the wall, move round to come up behind him and do a ledge assassination on him. Jump out of the well and run into the bushes to the left in the direction of the green marker.

From here you can move round the large tree’s left side and follow the cliff towards the green marker. Duck into the shrubs as you get nearer (startling a flock of birds) and then run in the direction of the hideout. You will avoid any guard’s attention as there aren’t any near enough to notice you. Run into the green light to access the hideout. 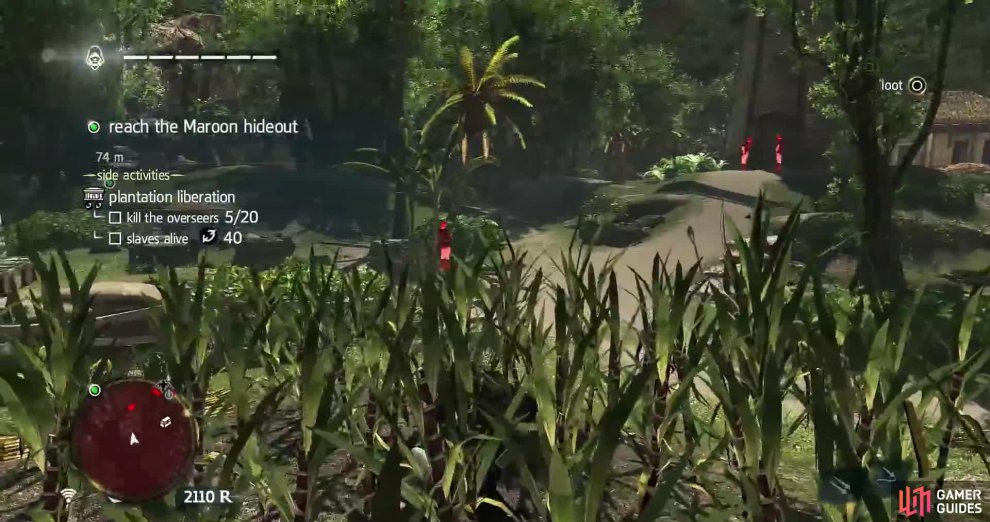 Eliminate all overseers in the hideout

The first objective is easily completed. To the right of your starting position there is a tall ledge with a guard below it. Walk to the edge and then perform an air assassination on him for an easy completion. Quickly move through the water and round near the back of the docks to the next lot of guards.

Hide behind the pile of stacked wood and call the guard over. Do a corner takedown on him. It doesn’t matter if you are spotted by the guards as it has no effect on the mission. The next set of guards can be creeped up on from behind and dispatched. One will move between crates, running back and forth so you can just walk up behind him. The other is just hanging around near a box and is just waiting to be killed. The guards above you may see you but duck behind a box and they will soon forget about you.

If you like, you can lure a few of them down the stairs and take them out before they spot you properly. Some will jump down to your position, leaving you free to stab a blade in their back. Move up the stairs once all the immediate threats have been dealt with and position yourself behind a tent. A guard will patrol to the right of this so whistle him over and kill him. There are two further guards stood around inspecting things so you can simply double kill them where they stand. 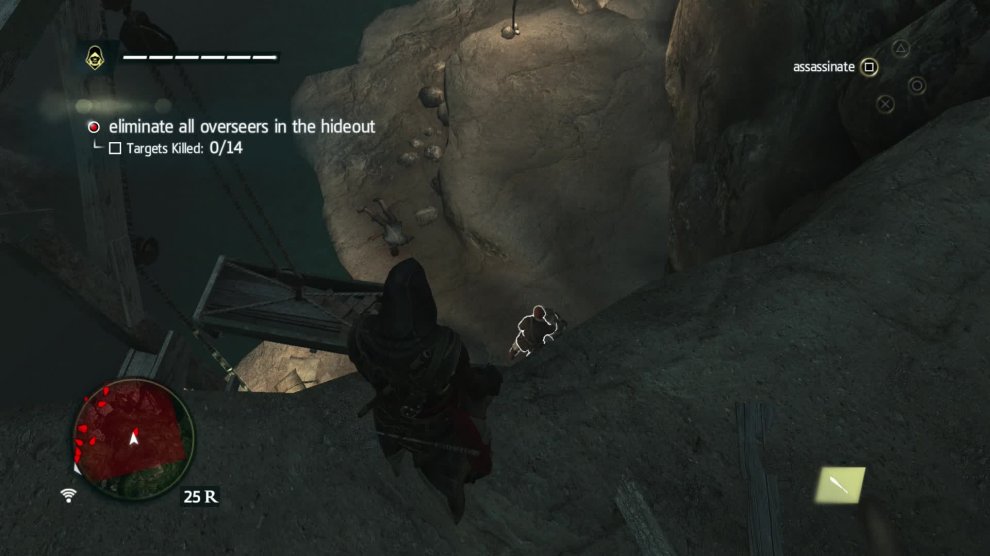 Climb up the rafters to the next guard stood in a corner. Jump over and kill him before moving on to the two guards off to the left. Rush over and double assassinate them before turning your attention to the guards near the cliff edge. These guards are prime targets for the last optional objective. You can either run over and push them both over the edge or you can start a fight, counter attack them and use the push to direct them over the edge that way. The choice is yours! Chances are they won’t be dead after pushing them over so follow them down and kill ‘em. 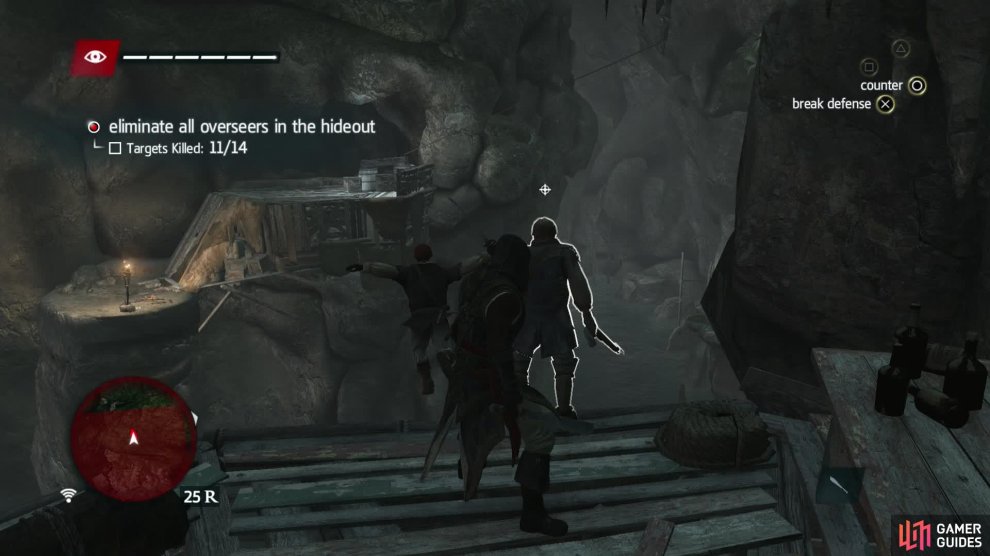 Lastly, head over to Augustin and free him.

Stop the overseers before they escape

This next section is a bit of freerunning and platforming. Run up to the lift and slash it to get above the overseers. Follow the cliff path by jumping over obstacles until you find a rope to swing to the other side. Jump across the various bits of wood and stumps until you get to the island. Run up the hill and Adé will dive off the edge into the boat and kill them to complete the mission. 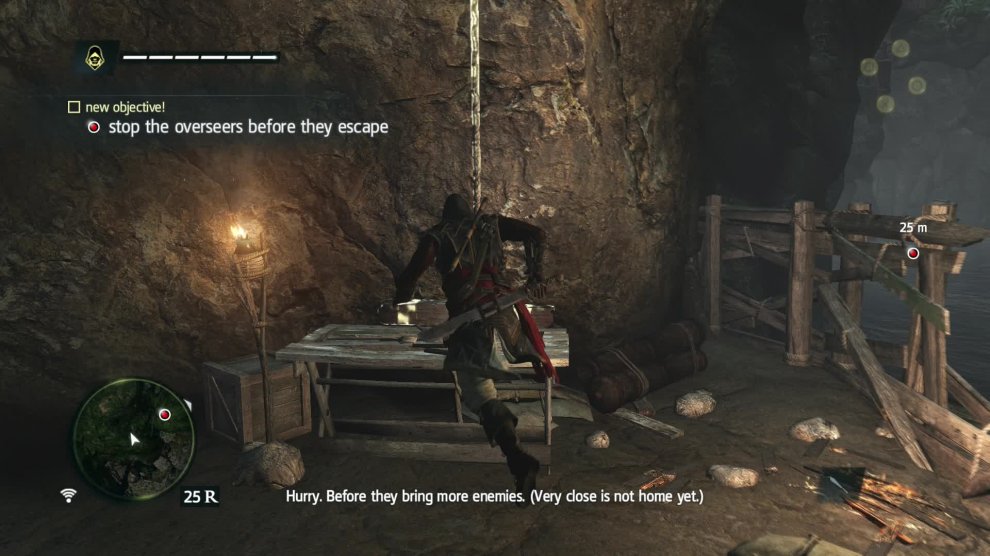 You will now be told about the resistance and the Maroon hideout. You can purchase supplies for Adé and the ship here and around the Port-Au-Prince area. You will also get access to the awesome blunderbuss weapon now too. This is like an old-fashioned shotgun though you only get one shot before reloading. It is a short-range weapon but can take out multiple enemies in one so use it to clear out large swathes of enemies or just to make a mess when you’re bored!

Go to the supplier and purchase some ammunition for your new toy and then return to Port-au-Prince to finish the mission.