We must now infiltrate the governor’s mansion by pretending to be a slave. Dressed in rags, Adé is told to follow the slaves to the manor house and seek information from them.

Enter the grounds of the governors mansion 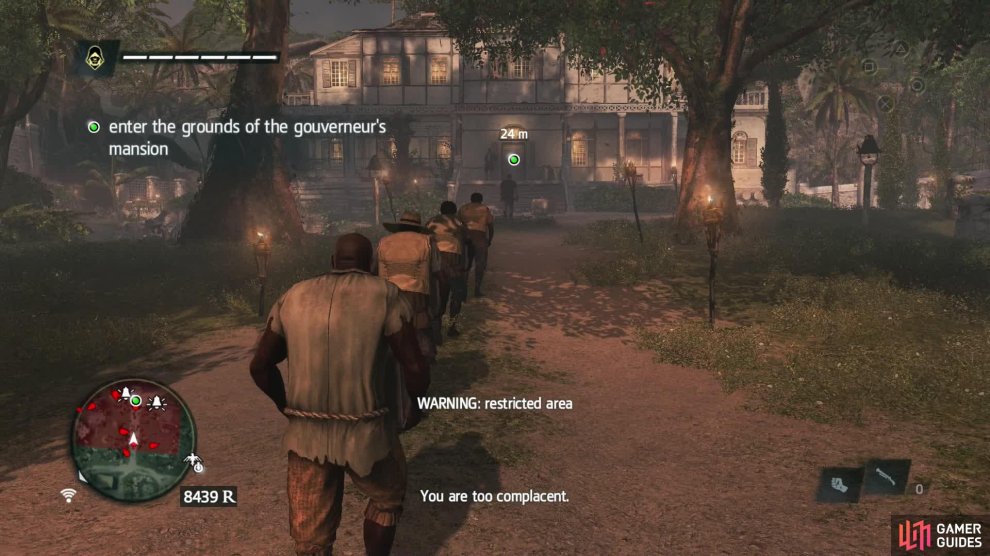 Blend in with the slaves

A green light will appear near some slaves sawing wood. Head over there and Adé will ask them for information about the guards’ movements. A cutscene will follow.

Locate the Governor in the mansion

You must be very careful not to get caught during this section because any alarm bells will cause instant de-synchronisation. Use Eagle Vision to tag guards and check for available hiding spots to plan your route. Wait for the nearby guard to turn his back and then run over and dive on him to knock him out. Make sure you don’t do this too near any guards or they will be alerted.

Next, run to the bushes near the guards stood around by the gate. One of these is the overseer you must kill to complete the optional objective. If you use Eagle Vision, he will show up gold. The guards will have a little chat and eventually separate, leaving you free to sneak up and remove the overseer. The overseer will walk around the tree and then stop so this is your chance to take him out.

His friend will have walked to his position by now so run to the right and hop up the cart and wall into the bushes behind him. Strangle him from here. Run to the next lot of bushes in front of you and then use Eagle Vision from here. You will see the Governor at the top of the mansion. 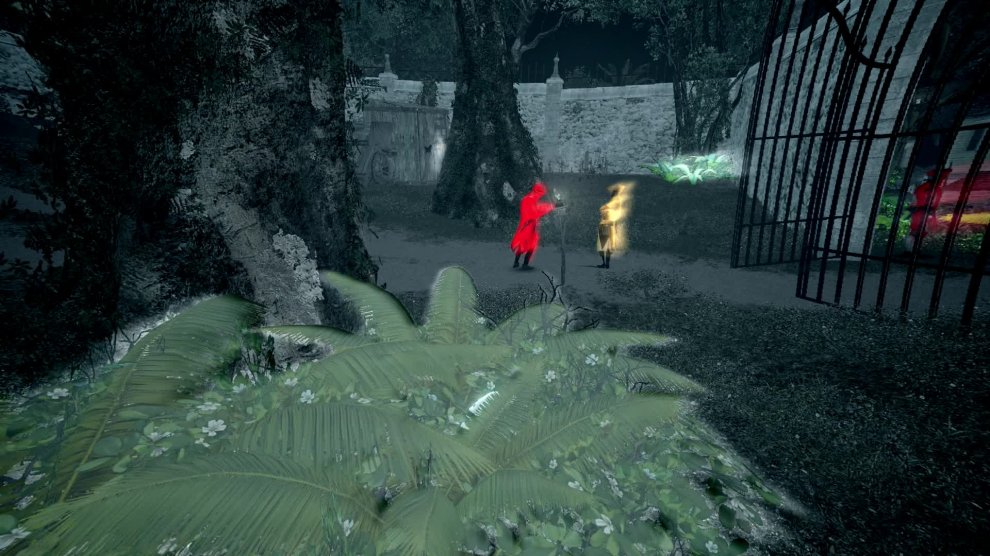 Eavesdrop on the conversation

A guard will walk near your position so whistle him over when he gets close to take him out. There is also a guard captain patrolling around but you can just about get away with running to the bushes next to the house. He may follow you over here to inspect so this is a perfect way of getting rid of him. The next guard can also be called over here too.

After you have removed all the threats, climb the side of the mansion up to the governor. Stand on the edge of the balcony and then climb over the side to follow the lower roof as they walk. Listen here until they finish and then climb on top of the mansion again. Drop down to the lower roof, and then wait for the guard to inspect the spot. This is your chance to climb down into the bushes beneath the roof. Whistle the guard near the spot over, take him out and reach the spot. 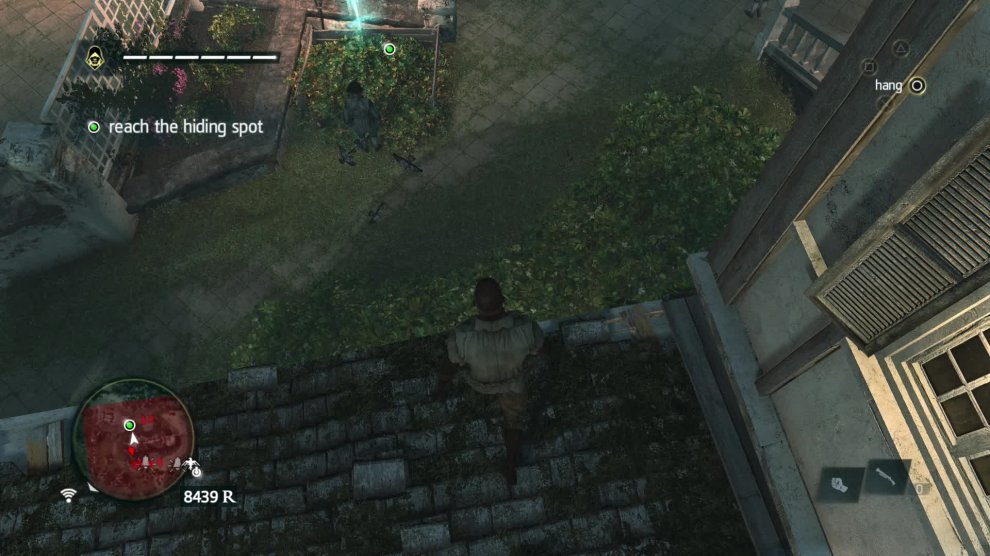 Eavesdrop on the conversation again

Funnily enough, you need to go back to the bushes you just came from to listen in again. As they move, follow the perimeter of the house to the right and keep to the bushes when they stop. Follow the house all the way around until you are finally sitting in the bushes next to the front steps and the alarm bell.

Before returning to Bastienne, you should rescue the slaves from the nearby barracks. Whistle the two guards stood by the steps over and remove them. Sabotage the bell just in case. You will then see a punishment icon on the minimap and this is where the slaves are located. Approach the barracks from the left side, using the bushes to skirt the edge.

You can now either sidle up to the fence just behind the guard stood against the wall or rush to the bushes to the right of the hut. Should you decide to start with the guard stood against the wall, position yourself so you can whistle him over and do a corner takedown on him. You can then whistle the next guard and remove him the same way though this is the riskier approach because of the other guard.

If you start from the bushes, survey the guard positions and tag them. Now, run back to the first lot of bushes next to the fence and the guard near the two slaves will be alerted. He should follow you over here, allowing you to remove him out of sight of the others. You can then perform a corner takedown on the guard next to the wall and finally run over to the last one and knock him out. Success! 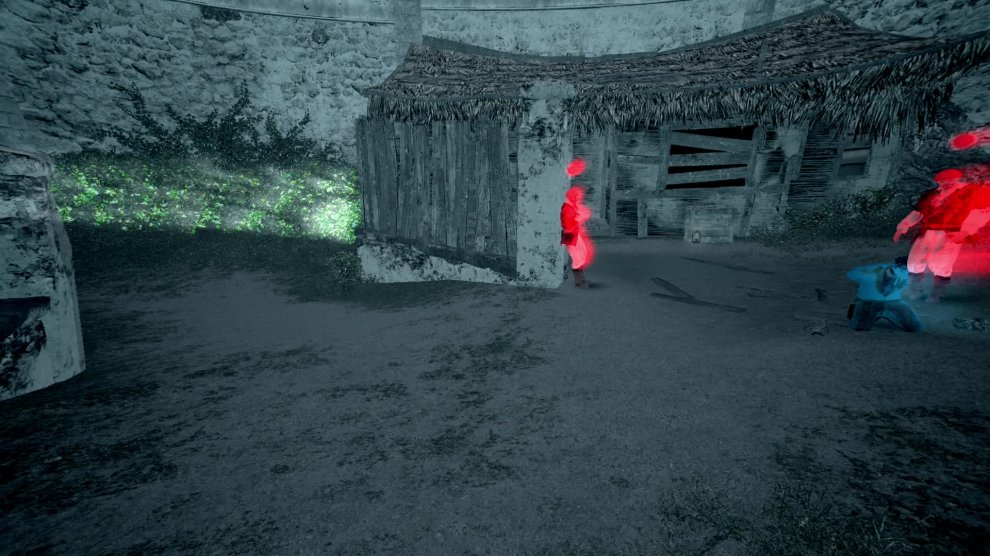 Finally, head out of the grounds of the mansion in the direction of the green marker. Hop over the wall here and head back to Bastienne to complete the mission.

Before you can continue on your quest, you must pay a visit to the Wellington plantation out in the sea. Find it marked on your map and sail over there. There is usually a ship docked outside you will have to sink before you can approach the plantation. It is a fairly powerful ship so pummel it with mortars from a distance.

Once it’s down, dock and head into the plantation. This one is a “kill 20 overseers” mission. You should be used to the rigours of liberation by now so put all your sneak skills into practice. The plantation is very large so there are plenty of overseers to prey upon. Stick to the many hiding places around and whistle guards to your position. If you get a chance of a double assassination, take it.

Should you require help, you can ask your slave friends to join you. Use them as distractions or to remove large groups of overseers. The more slaves you have freed up till now, the stronger these groups will be so definitely make good use of them. Once you have dispatched 20 overseers, the plantation will be liberated, leaving you free to head back to start the next mission. 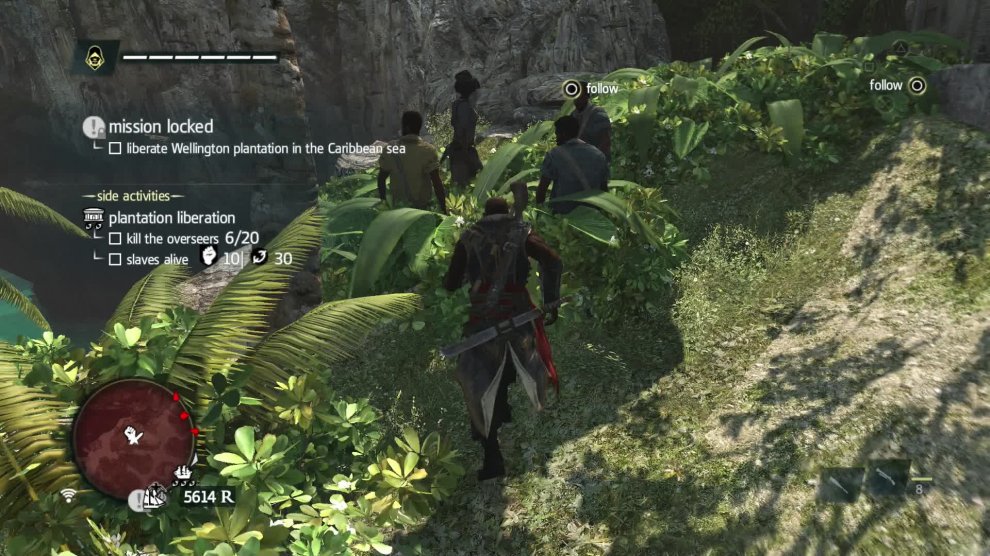