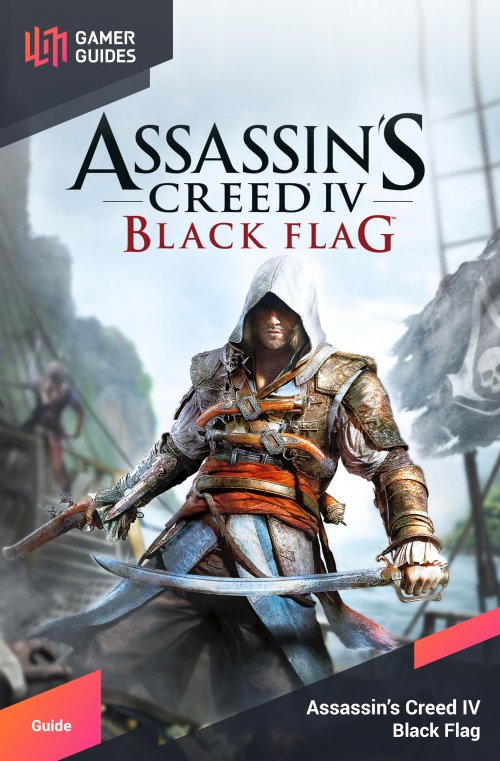 This mission begins automatically after the conclusion of the previous one. When you regain control, hit the button prompt that appears on-screen to free yourself. Now it’s time to go and recover some gear.

Run over to the first doorway in front, take cover behind the frame and whistle at the guard in the next room. Perform a corner takedown on him as he approaches. Enter the room and knock out the guy with his back turned to you. Now use the shelves in the centre of the room as cover to make your way over to the other side of the room. From the edge of the shelf, peek around the corner and whistle the guard here over to you when he is within earshot. Take him down from the corner too.

At this point, your mate will run up and take down the two guards through the next doorway for you. Follow him into the room and take cover behind the wall separating the hallway to the next room. Again, lure one of the guards over to you by whistling and take him down from behind the corner. As you do this, your friend will eliminate the other. Now that it is all clear, approach the objective marker to recover your gear. 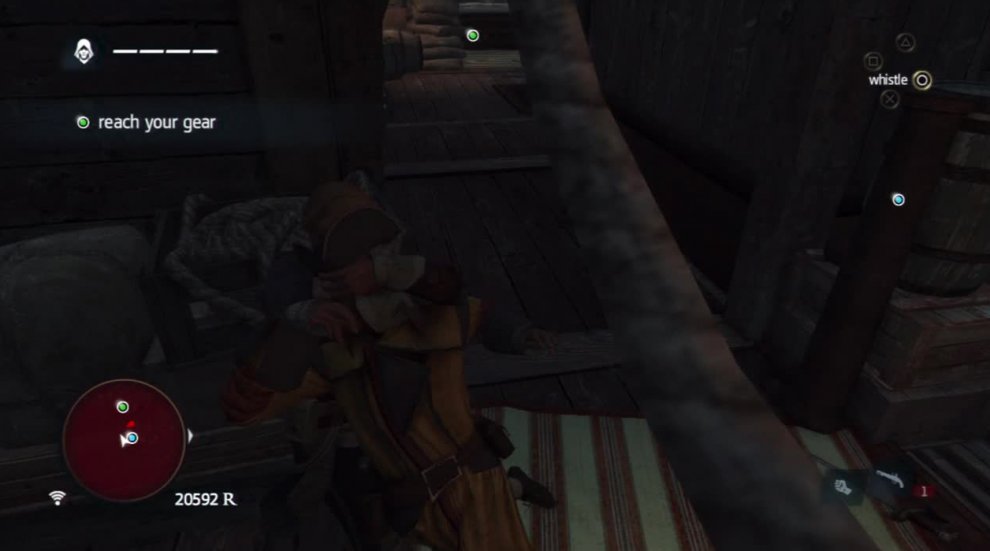 After a short scene, climb the nearby ladder to reach the deck of the ship. This part of the mission is essentially a whole bunch of pirate rescue mini-missions. These can be found throughout the major settlements in the game world following this mission.

To do these, you need to approach each icon on the minimap without being spotted, deal with the guards at these locations and then interact with the prisoners to free them. We need to free eighteen prisoners in total to complete the mission and there are a total of twenty-three available. Note that for freeing all twenty three we will complete an optional objective.

It is really self-explanatory. Use the ships' riggings to approach from above out of sight, or sneak up using barrels and crates as cover to approach each situation, kill the captors closest to the prisoners first, kill off any guards who become alerted and then free the captives. Make your way between each of the first three ships and save the pirates on the decks. On the final ship, clear out the deck of the ship and use the hatch to enter the hold of the ship. 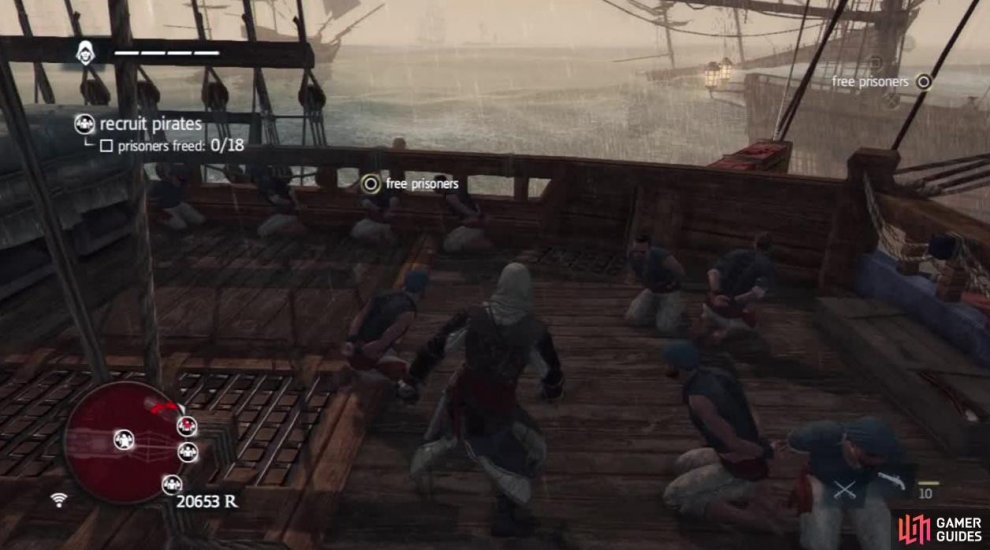 Once inside, move up to the wall directly in front of you and peek around the corner. Whistle the guard over when he is in range and deal with him from the corner. Move up and eliminate the two guards in the next room. Proceed sneakily into the room with the ‘Pirate Rescue’ icon and double assassinate the guards here. Free the prisoners and climb the ladder nearby.

Now that we are back on deck, a new objective marker will have appeared. Make your way over to the ship indicated and eliminate the captain aboard. Now interact with the wheel here for a scene. We’ll now be in control of the ship and this sequence will introduce you to the basics of controlling it.

The coloured arrow on the mini-map indicates wind direction and depending on the angle of your ship to the wind, you will speed or slow down accordingly. Green indicates a good, fast position, yellow not so much and red will slow you down considerably. 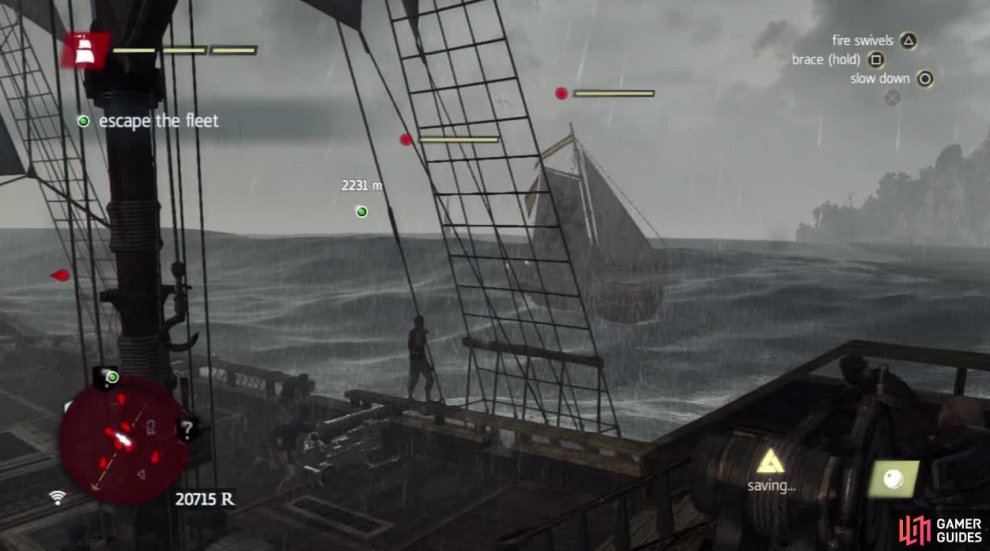 Note: There are a few small, hostile schooners around as you begin this segment that you can sink if you wish, so let’s practice our ship combat!

In general, when you are engaged in nautical combat, the aim is to manoeuvre your ship so that its weapons are able to face your target. The front has front-mounted canon, the side broadside cannons and at the rear you are able to drop explosive barrels.

When you want to use one of the weapons, look in the direction it is located, hold the aim button and you will see a white flight path appear on screen which indicates where the cannons will fire. Enemy ships likewise have a similar system, although their attacking angles will appear as colours on the water with yellow and red indicating where their weapons are targeting.

If you see your ship in the range of the red water, tell your men to brace immediately to avoid taking too much damage or immediately manoeuvre out of the area. 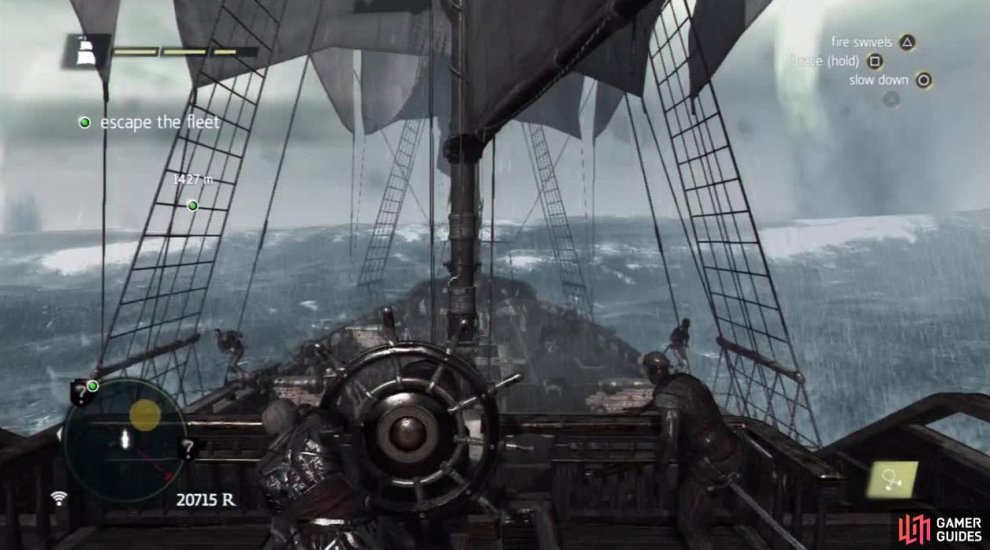 Once you have had your fun with those ships, our real goal is to reach the green waypoint marker in the distance. Sail your way over to this. On your way you will encounter a couple of rogue waves (indicated by a wave icon on the mini-map).

We need to hit these head on to avoid taking damage from them. We’ll also see a water spout (indicated by a yellow circular zone on the map). You will want to avoid these at all costs as they will decimate your ship in seconds. When you reach the waypoint, the mission will be complete.

Note: For completing this mission, you will earn the achievement/trophy ‘ Good While it Lasted ’. 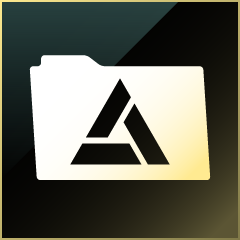 Good While It Lasted