Approach Blackbeard’s ship The Queen Anne’s Revenge in the ocean by the San Ignatio shipwreck just to the east of the Dry Tortuga fort to begin the sequence. Once the scene to start the mission is done, sail to the San Ignatio Wreck, dock and use the diving bell to reach the seabed below.

This mission is an introduction to diving at shipwrecks and upon its completion, we will be able to approach, dive and explore all of the shipwrecks located across the Caribbean. Whilst we are underwater, we have an air meter in the centre of the screen to represent remaining air supply. If you look at the mini-map, you should also be able to make out small, balloon-shaped icons. These are barrels that we can approach to replenish our oxygen level.

There are four chests in the starting area and we’ll have to loot three of them during this mission to fulfil the requirements for one of the optional objectives. As such, let’s get it over with ASAP! 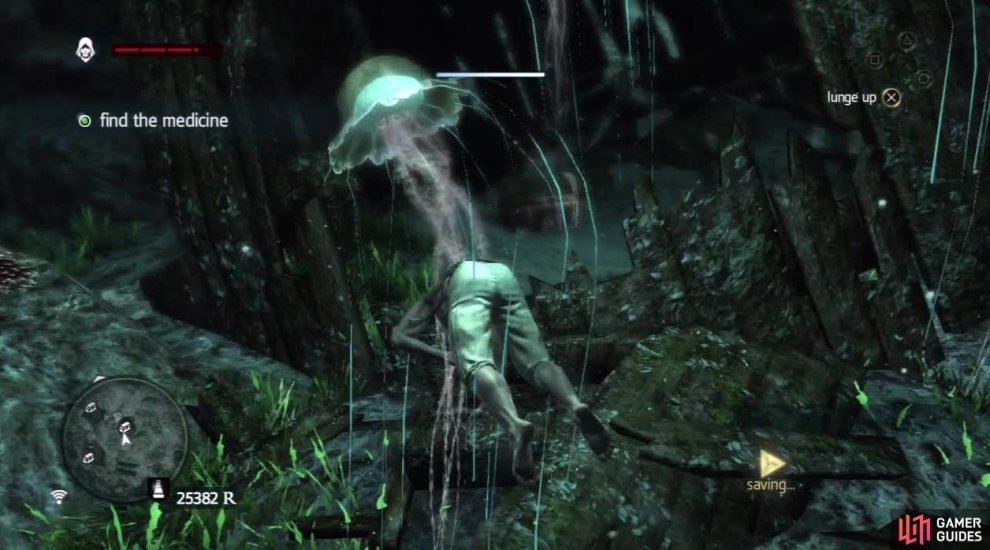 When you have grabbed three of the chests, approach the glowing hatch on the main deck of the ship and interact with it to access the inside of the ship. Loot the chest located inside.

Following the scene, make your way through the newly formed tunnel until you reach the air pocket. Surface to replenish your air supply. Afterwards, continue through the tunnel. You’ll reach a cave with a strong current that will interrupt your swimming and propel you all over the place. At this point, try not to fight it too much, but work your way towards the northern side of the area. Fin the small exit leading outside.

As you leave the indoor area, use the air barrel in front to resupply your oxygen. We’ll now see sharks about. Note that there is an optional objective at this point to complete the mission without being attacked by one of the sharks. To do this, we can use the seaweed on the seafloor as a stalking zone and the various wrecks about as hiding places to avoid detection. 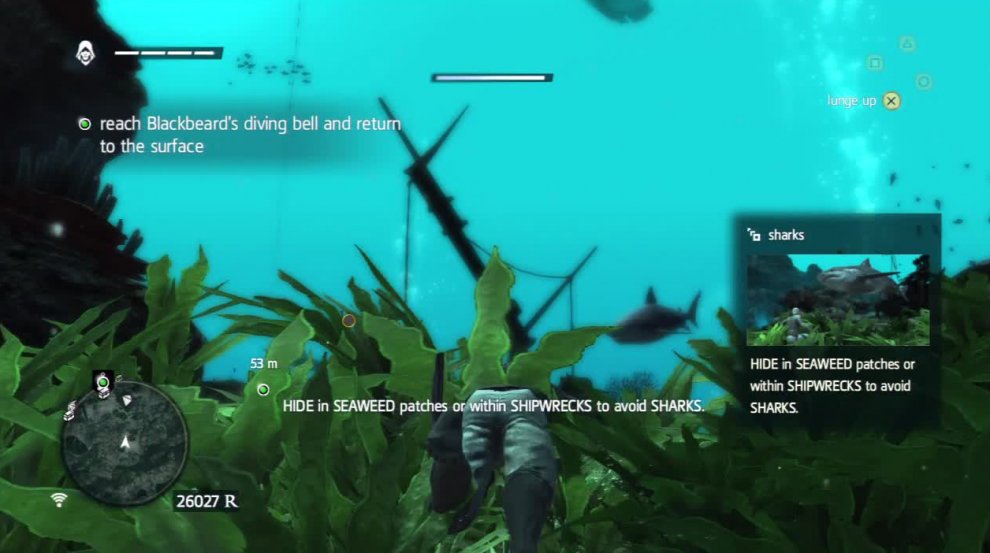 Enter the wreck just to your right. Inside you’ll find an Animus Fragment. Move through to the back end of this. Outside you should spot another chest directly in front. Ignore this one for the moment and swim to the right to find another wreck.

On a rock platform in front of it just behind the seaweed you’ll find a chest. Open this and return to the chest we ignored a few moments ago and open that too.

As we were swimming back to the ignored chest, you will have spotted the Animus Fragment in the distance. Swim over to grab that and duck into the wreck to its left to find the final chest in the area (this contains a Plan – Elite Hull Upgrade for the Jackdaw).

Now we’ll be quite low on air, so exit the wreck and head for the diving bell marked with the green objective marker. When you arrive at the bell, interact with it for a scene to complete the mission.