Note: This mission is tough, but is easier if you have upgraded the Jackdaw to at least the specifications listed in the Sequence 8 intro on the previous page. It will also be much easier to complete if you have previously captured the Cabo de Cruz fort.

The first part of the mission asks us to track down and locate the slave ship. If you look at the map, you will see that there is a green circle indicating the area in which it is located. As with the previous mission like this, the green zone is located within a restricted area, so ensure that you steer clear of the cones of visions of enemy ships as you go!

Fortunately, you have a friendly ship with you this time and it will eventually lead you to the target ship. Just keep after it and use the spyglass to identify each ship as you go until you find it. 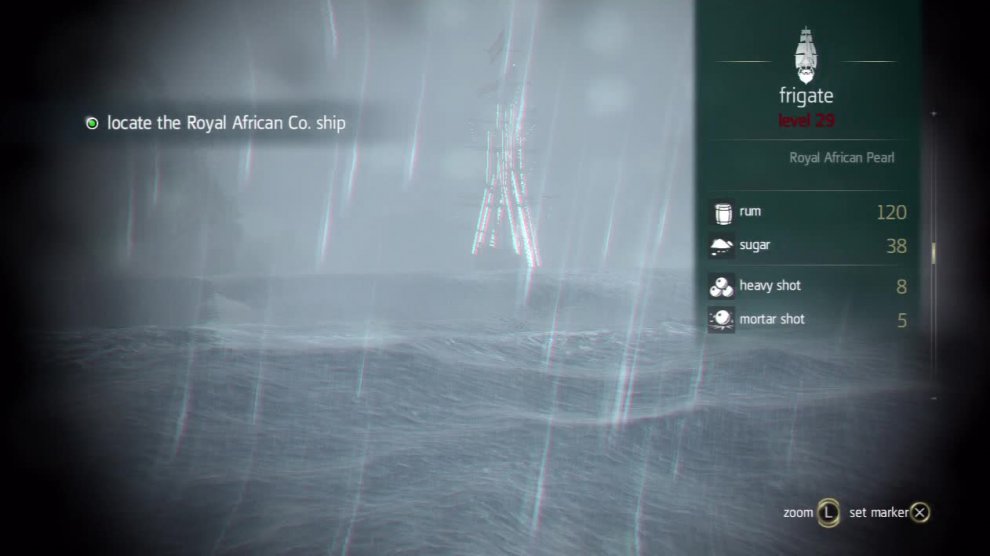 When we get close to it, the ship will sail off. The friendly ship that is with us will give chase and they will sail side by side, shooting at each other.

Hold back and follow them from a distance so as not to be hit by any cross fire, but feel free to use your weapons to attack the target ship (there’s a pretty difficult battle coming up and if you can do a bit of damage to the ship now, it will reduce the length of the battle). The slave ship and our friend will go at it until they exit from the small island chain and into an open area.

At this point, sail over and bump into the friendly ship for a short cut-scene. Our objectives will now be updated.

We are now in open water which means we have a bit of room to move around. The bad news is that there is a fort nearby (Cabo de Cruz), which will attack you with its defences and mortars in a bid to sink you. Additionally, there are another two brigs in the area in addition to the slave ship. Our goal is to incapacitate and board the slaver’s ship.

The fort’s defences consist of cannon towers overlooking the water, and cannon walls that will launch broadside-like strikes against your ship. In addition to the towers, the fort will launch mortars into the ocean in a bid to hit you.

Remember that mortars and enemy attacks will appear as colours on the water with yellow and red indicating where their weapons are targeting. If you see your ship in the range of the red water, tell your men to brace immediately to avoid taking too much damage or immediately manoeuvre out of the area. 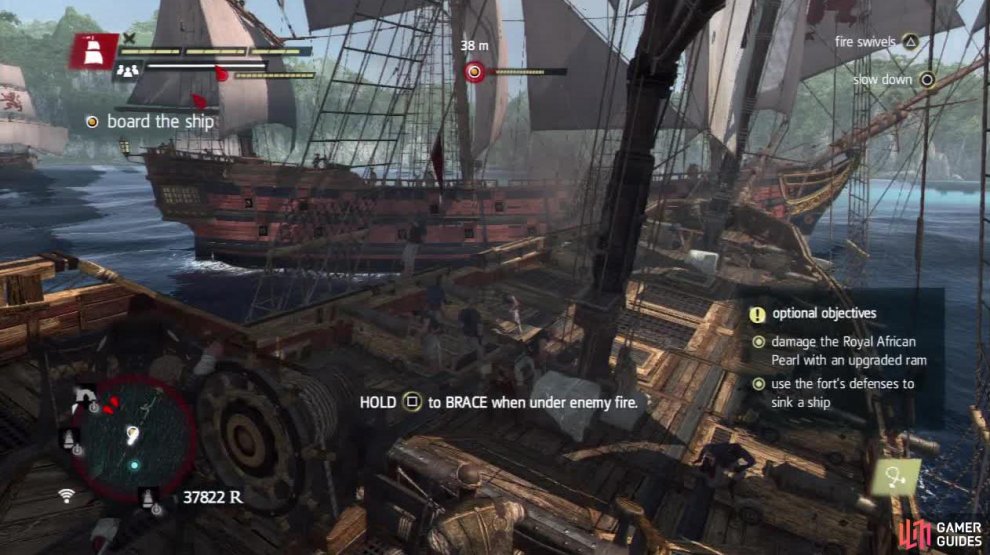 To complete the first of the two optional objectives we need to damage the target ship with an upgraded ram (I hope you purchased it earlier as I suggested!) by simply running into it.

The second objective is a little trickier, as we need to damage one of the other ships in the area quite badly and then instead of finishing it off, lure it into following us past the fort and have it get caught up in the fort's cannon and mortar fire so that it sinks. Note that if you have previously captured the Cabo de Cruz fort, it will target enemy forces instead of you during the battle.

Either way, once you have whittled the target ship down to minimal health, board it. Kill 15 soldiers on deck and climb the riggings to take out the two Gunners in the platforms at the top to complete the mission.