After the intro, move up the street a short distance and enter the plantation through the broken wall. Hide in the sugarcane field and move to the far end. Wait for the Brute to patrol close to you and then whistle him over to you. Eliminate him from cover (note that we have to kill four of these guys for an optional objective). Do the same lure and assassinate manoeuvre for the next patrolling guard.

Now when it is safe to do so, move up and sabotage the first alarm bell here. Continue into the bushes on the far side of the bell. Kill the patrolling guard here when he comes into range. Then make your way over to the bushes next to the building.

Follow them around the corner and stop in the bushes just before the street. Wait for the group of three patrolling guards to start walking back to the right and then cross the street and run into the sugarcane field.

There is a second bell to your right. Use whistles and the cover here to eliminate the three guards that patrol around it and then sabotage it when you are able. 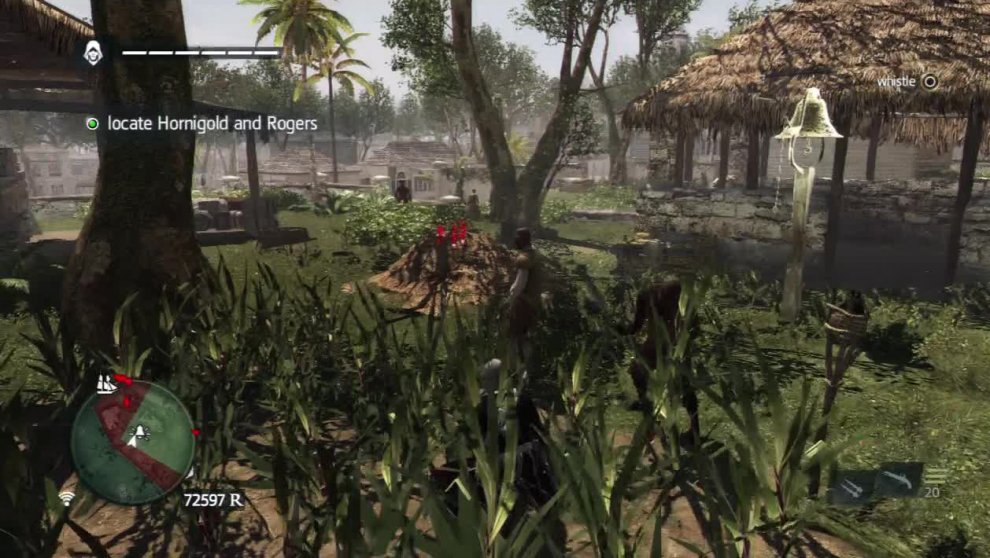 Return to the sugarcane field just this side of the road we crossed earlier. From the chimney of the house here, run across the small open grassy area to the bush on the hill opposite. From here turn left to see a brute with his back to a bush.

Sneak down into this and assassinate him from cover. From here, look north and you’ll see another stalking zone with another brute patrolling around it. Wait here for a few moments as there is a pair of patrolling guards that periodically enter the area. Once you see them walk off and no-one else is looking, move up to the next stalking zone.

From here, assassinate the Brute when he walks past and then move up to the bush at the base of the house ahead. When it is safe to do so, run over to the stalking zone bush in front of the fenced off area with the civilians raking inside. From here if you turn to the right you should spot our targets. Activate Eagle Vision to tag them. 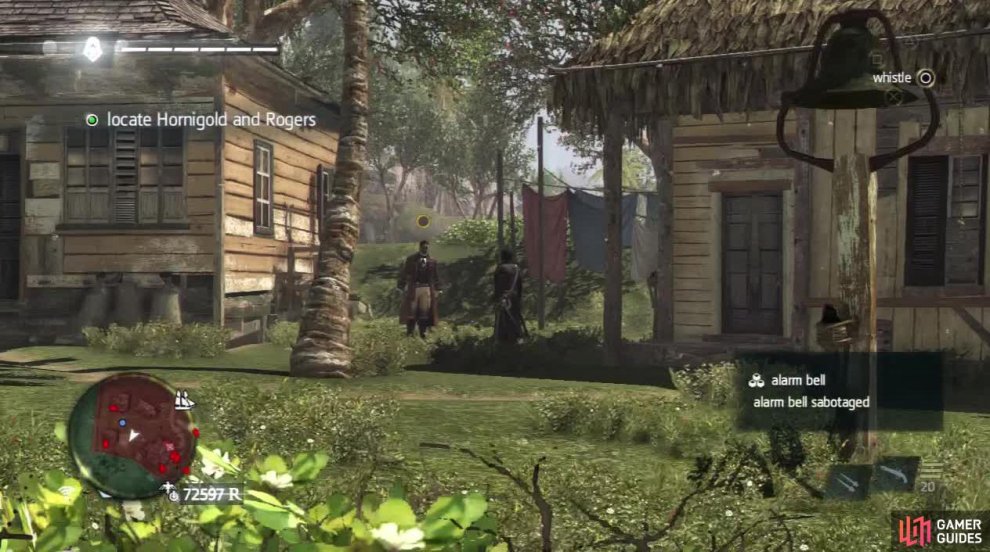 As they go, use the buildings as cover and peek out from corners to keep them in sight as you continue after them. They will hang a left soon enough and walk through a circular restricted area and out the other side where they will stop briefly.

To avoid unnecessary trouble, head around the side of the building to the south of the restricted area and peek from around the corner of the fence to keep an eye on them until they move on. Follow them using the various stalking zones here until they reach the next larger restricted area.

The main entrance is guarded, so go and hop through the gap in the fence to the right. You’ll end up in a stalking zone bush inside the secure compound. Assassinate the Brute with his back to you from the bushes here (this should complete the optional objective of killing four Brutes). Now look back at the targets who are chatting with a new friend at the gate. 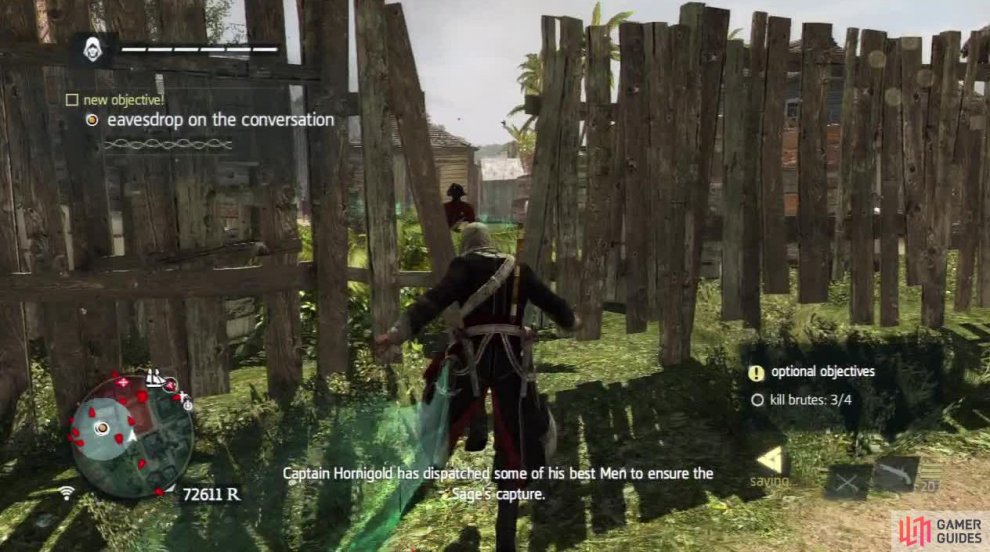 After a few moments, the group with your targets will walk off. Follow after them hugging the left hand wall and staying out of sight behind crates until you can safely reach the stalking zone bushes ahead. At this point, the group will enter a building here.

We’ll stay outside for the moment though. Assassinate the guy with his back to you at the edge of the bush and move up to the next stalking zone and repeat.

Now climb up to the open window above to the left of the door our targets went through. Sprint across the upper level and assassinate the Gunner at the far end. Jump out the window into the tree and climb to the top. Perform a leap of faith into the haystack below.

Now quickly walk a short distance down the street after our targets and then cut in through the open fence on our left. Run over to the eastern wall of the large building and wait for the eavesdrop circle to move south a little further. When the zone incorporates the haystack near the fence to the south, jump in to hide. After a few moments a scene will play.

After the scene has run its course, sprint out of the barn, hop one of the fences and escape the area. Find a hiding spot and when it is all clear, the sequence will be completed.