Now this fort’s sea-based defences are not that strong, however the conditions on the water are a little tricky, making dodging that mortar fire and placing accurate shots a little tricker. Each time I have attacked this fort I have encountered a storm, very strong winds and a waterspout.

If the same happens to you, you need to adjust your position to ensure that you are not in the path of a waterspout and that the wind won’t blow you well off course into an awkward position. Take shots at the fort when you can, but prioritise survival.

When you have dealt with the naval side of things, dock in the area. Climb the small set of stairs here until you reach the collapsed section of burning wall. We can’t pass here so climb the wall to the left of this. Once you reach the top, two target markers will appear. We have to kill the two fort commanders.

Move up to the ledge in front. In the courtyard below you will spot the first target. Drop down and dispatch him. Clear out any other hostiles whose attention you have attracted. Once it is safe to do so, climb the wall to the left (east).

Fight your way across the platform here and work your way up the stairs. Follow the path around to the right to find the second target with a Gunner on a cannon firing platform. Finish them both off. 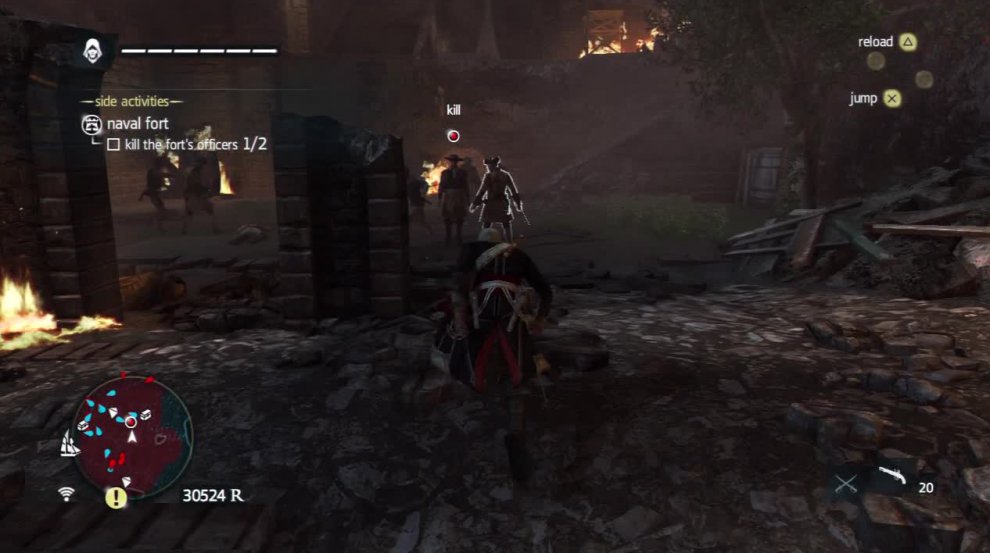 Once you have eliminated both Officers, use the rope from the cannon platform where we killed the second Officer to access the uppermost courtyard of the central part of the building. Make your way over to and enter the door marked with the green objective marker. Kill the enemy inside. This will liberate the fort.