As with Castillo de Jagua, there’s nothing too tricky about this fort’s naval defences, there are just a few more than what we are used to so far. That shouldn’t affect your tactics in any way, shape or form though as the mortars and heady shot/broadsides will work wonders. We just might need to make an extra pass or two by the fort to finish off any remaining defences.

Dock in the area permitted and follow the path. Climb the stairs until you reach the collapsed section of burning wall. We can’t pass here so climb the wall to the right of this. Once you reach the top, clear out any enemies immediately in front of you. From this central area here we need to kill three fort Officers. The first is up the slope to the right, so head over there first to eliminate him and his two buddies. Return to where we reached the central area.

If you turn to the left and look over the ledge you will see the second target on a platform below, drop down and assassinate him. Kill his bodyguards if they attack you and then climb back up the wall to the previous area. Once you are back up, look to the east to spot a crane and some hanging cages. The final target is on a platform below these. Run over and assassinate him as well before returning to the central area once again. 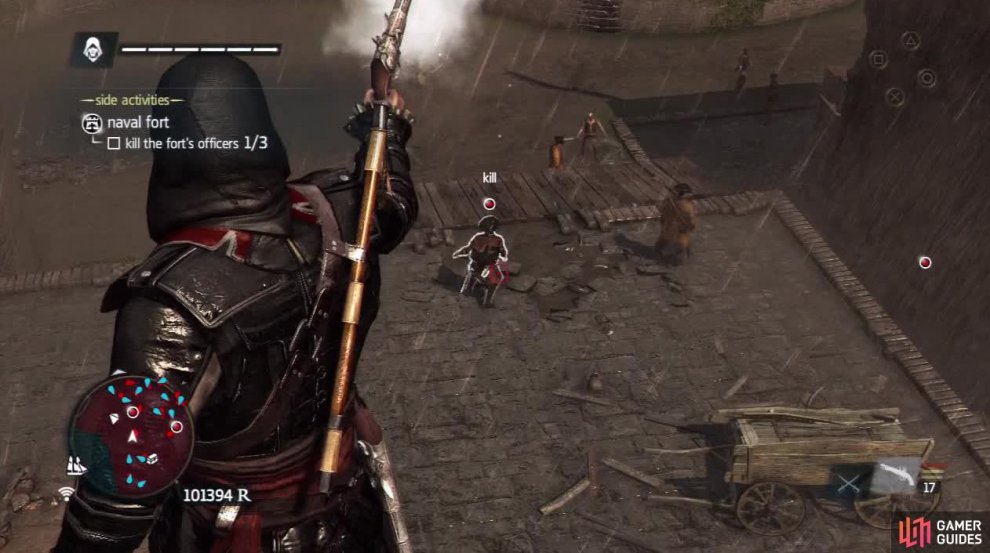 After all three Officers have been dealt with, return to where we killed the first target and enter the door marked with the green objective marker. Kill the enemy inside. This will liberate the fort.