In addition to having more defences in place than any other fort in the game, the water surrounding Navassa is often populated by brigs and frigates that will become hostile if you attack the fort. This results in a drawn out naval battle with both ships and land-based defences – messy!

If you get drawn into a situation like this, draw the ships offshore and away from the fort to engage them without having to dodge constant mortar fire. Then when it is safe to do so, resume your assault on the fort itself.

When you have dealt with the defences, head over to the green beam nearby to dock. Exit the Jackdaw and climb the stairs until you reach the collapsed section of burning wall. We can’t pass here so climb the wall to the right of this.

Once you reach the top, clear out any enemies immediately in front of you. From this central area here we need to kill three fort Officers. The first is up the slope to the right, so head over there first to eliminate him and his two buddies. Return to where we reached the central area.

If you turn to the left and look over the ledge you will see the second target on a platform below, drop down and assassinate him. Kill his bodyguards if they attack you and then climb back up the wall to the previous area.

Once you are back up, look to the east to spot a path down to a lower deck to the right of the guard tower. The final target is on the platform at the bottom of the stairs. Descend the stairs and run over and assassinate him before returning to the central area once again. 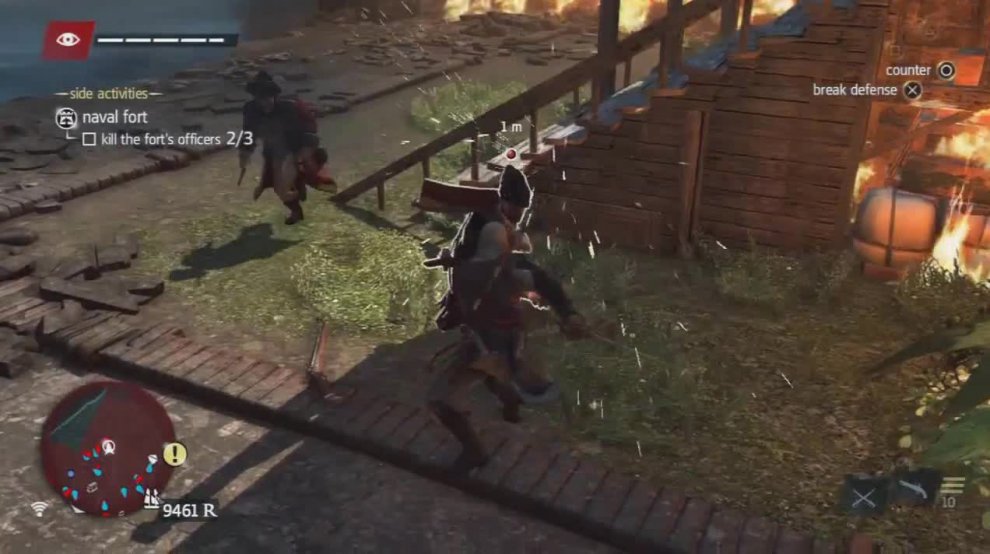 After all three Officers have been dealt with, make your way down to the door marked with the green objective marker at the base of the northern end of the fort. Kill the enemy inside. This will liberate the fort.