Note: This contract is unlocked upon completion of the other 14 naval contracts.

Before starting, you will want to visit a harbourmaster and refill all of your ammo – especially the mortars and heavy shot!

After beginning the contract, we’ll first need to go and find the ship that we need to protect. If you look at your map, you’ll see that there is a large, green investigation zone to the north of the fort where we picked up the mission from. Sail over here and pull out your spyglass to identify the target ship (I found it at coordinates: 362,209).

As we approach, the ship will be at around 1/3 health and be taking fire from a group of two schooners and two gunboats. Sail in quick, using mortars as you approach and use a broadside or chase cannons to take them out as quickly as possible when you arrive on scene.

As the final ship of this group sinks, another three (two brigs and a frigate) will appear on the horizon to the northeast. Use mortars to target them as they approach (try to take down the frigate as much as possible before it arrives) and when they get in close, use the usual heavy shot/broadside combination to make short work of them. 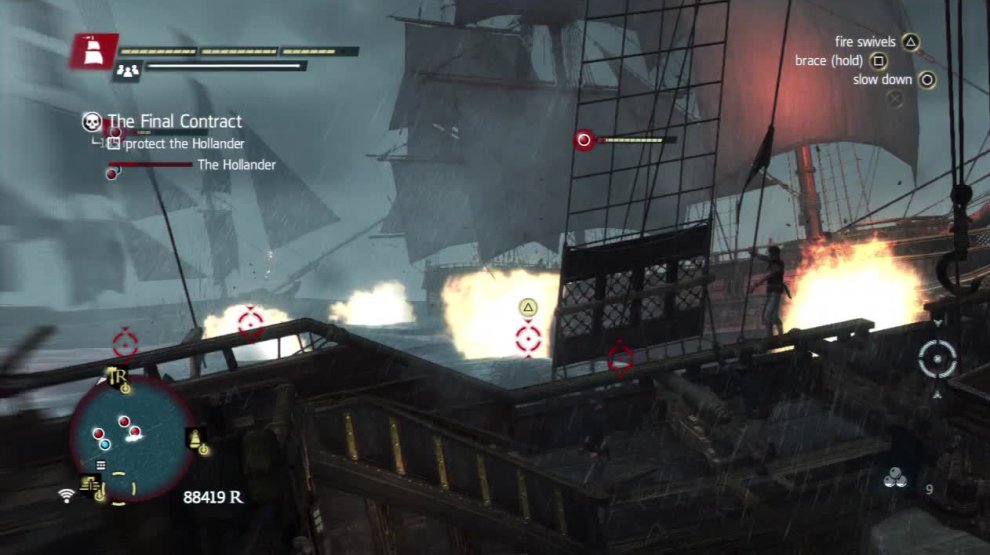 Again, as we sink those hostile vessels another group will approach, this time from the northeast. It consists of a pair of frigates and a man o’ war.

Again; use the mortars as they approach and try to damage the ships as much as possible from a distance (if you are a good shot with the mortar you should be able to take out one frigate and dish out a nice bit of damage on the man o’ war as well) before they reach our ally. Once this final group of ships has been dealt with the contract will be complete.