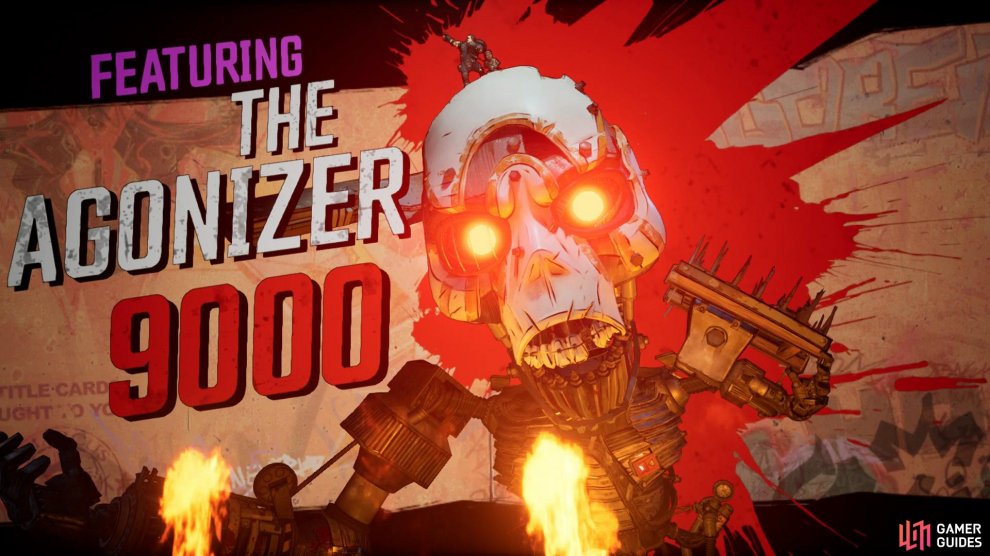 The first thing you should notice is that you’re in a circular arena in which The Agonizer 9000 takes up the central section. The Agonizer will not move from this position throughout the battle and you’ll need to keep an eye on it’s movements to dodge it’s attacks. The Agonizer’s weak spots are the many red fuel lines all over it and especially in the eye sockets, hitting these will deal Critical Damage.

The Agonizer has many attacks and identifying which ones are which will be the difference between success and failure. To begin with, The Agonizer will fire Saw Blades out of it’s chest, these can be easily avoided by running to either side of it however note that as the battle goes on, he’ll toss more Saw Blades at a time. Keep an eye on the floor that you walk on, certain parts of the arena will light up red, indicating that they will soon go ablaze so as soon as you see the floor you’re standing on change color, quickly move on to the next.

The Agonizer also has a Spiked Crusher, it will lift it’s arm above you and then slam down, this will usually occur while it’s tossing Saw Blades so keep on the move to avoid both attacks. Adds will also enter the arena as the battle goes on and the Agonizer will also pull up barriers across the arena, making it more difficult to dodge the attacks. As you can see, multiple of it’s attacks will play out at once so you really do need to stay on your toes throughout.

The most deadly attack however starts appearing after you deplete around half of it’s first gauge. The Agonizer will lower and extend a long blade that rotates around the arena. Depending on if it’s low or high, you’ll need to crouch or jump it to avoid it. At the same time, you’ll need to pay attention to the ground you’re standing on to avoid the flames. At you drain it’s health, the pattern of the flames on the ground will alter, going from back to front of the arena and the Mega Blender will rotate anti-clockwise at times.

The easiest place to attack the Agonizer is by far it’s large fuel tank on it’s back, it’s a target thats hard to miss. Try to stick to hip fire in this battle however, there are many attacks to evade and as the battle goes on, it becomes chaotic so you’ll need to be aware of your surroundings at all times. Once you deplete the first gauge, the rest of the battle is plain sailing, as you’ll just need to fire into the Eridium Core to deal massive damage to the Agonizer.