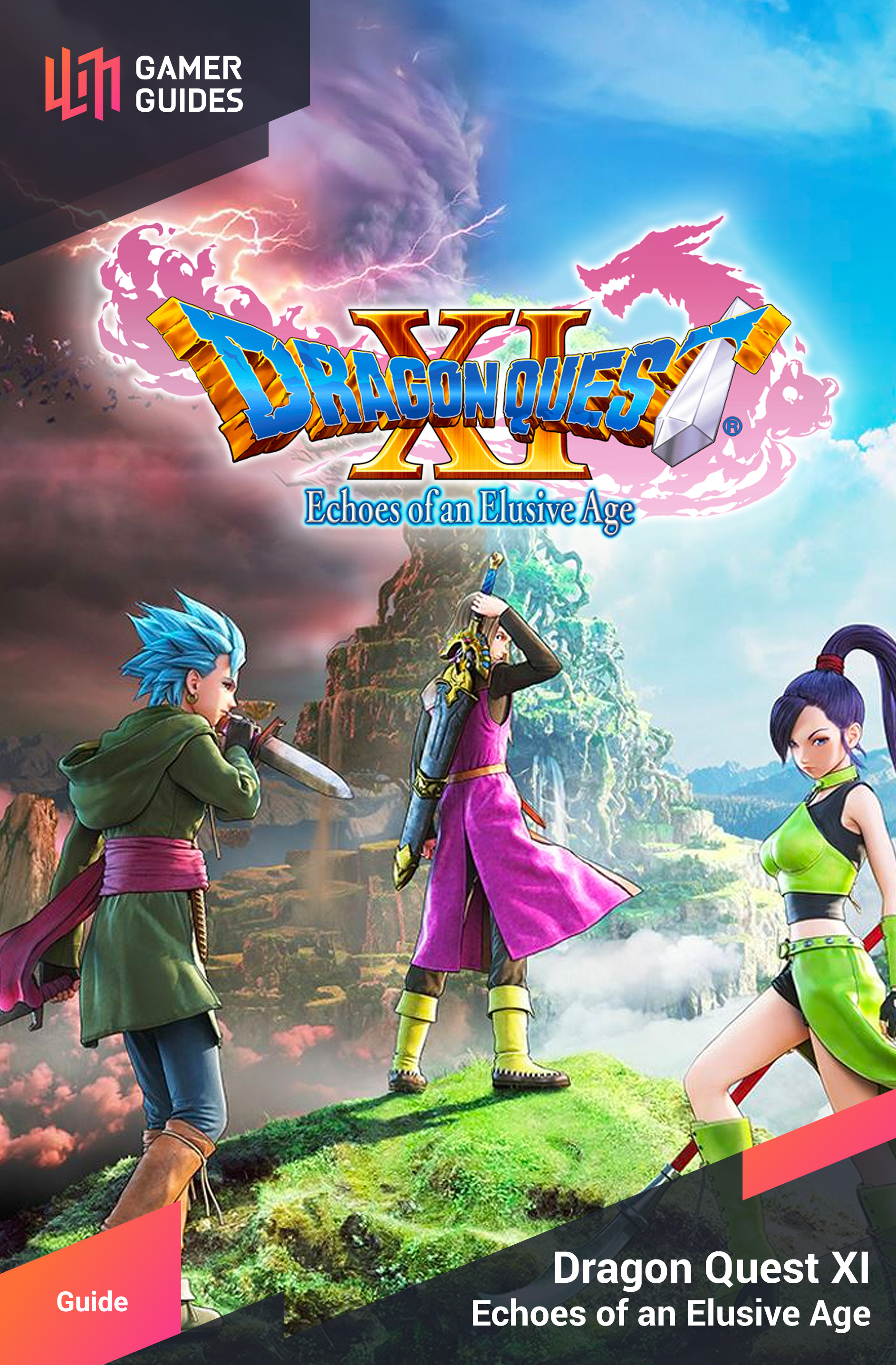 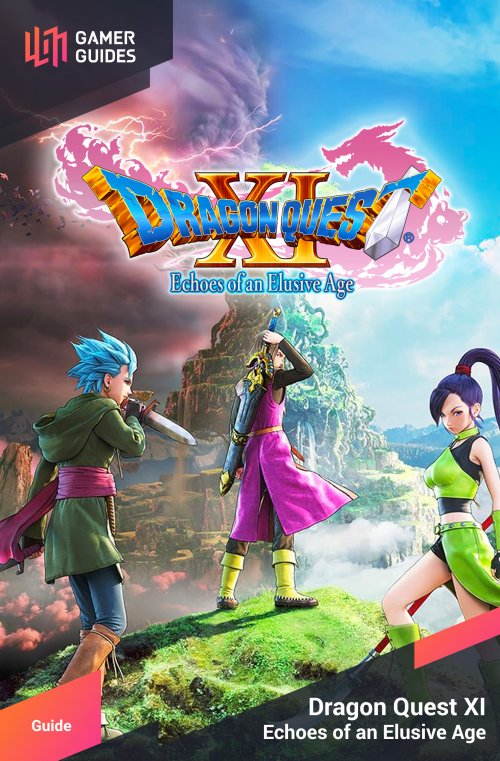 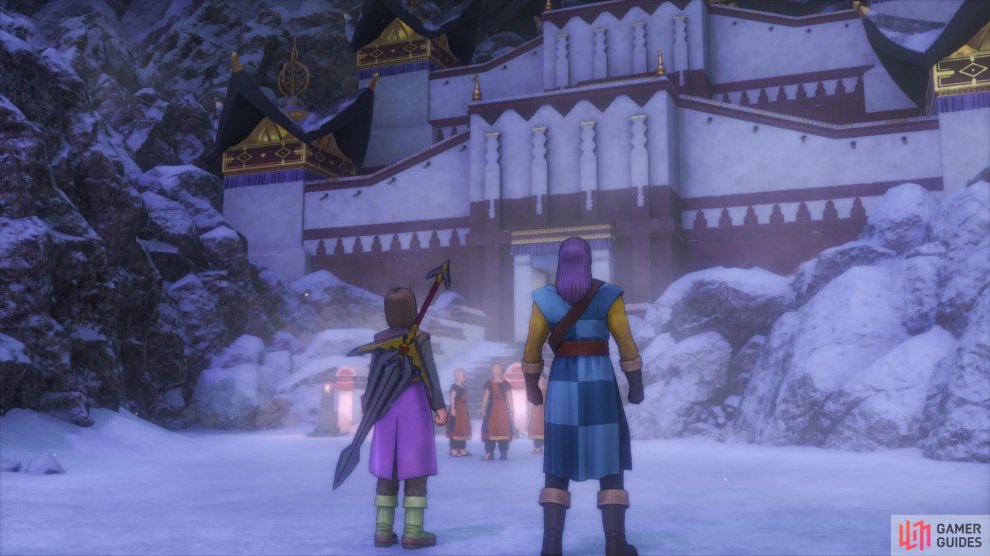 As you enter The Manglegrove via the entrance close to The Last Bastion, you'll see from taking a look at the map that the bridge to the Costa Valor has been repaired. Most of the monsters that you've already fought in Heliodor return here with one or two new Vicious types to add to your growing Bestiary. 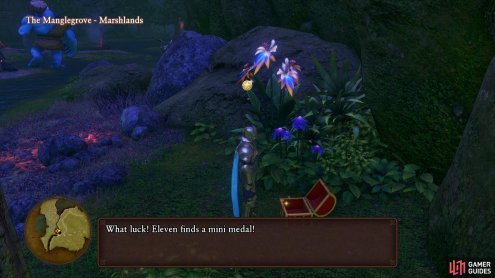 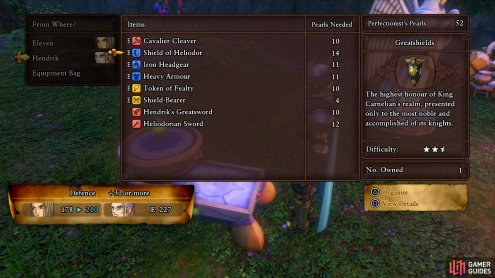 Climb the ledges to the north and then make a quick detour to the Campsite to register it to your Zoom list and access the forge. Begin by making a King's Axe for Hendrick if you have the materials (if not, upgrade his current axe) and some Magic Armor (at +3) for Hendrick first and then the Hero if you have left over materials. Finally, rework Hendrick's shield to +3 along with the Shield-Bearer accessory (along with equipping it on him). Leave the Camp and make your way over to the northwest, taking the bridge over to the Costa Valor. Not much has changed here in the Costa Valor save for a landslide blocking the way to Puerto Valor so ignore it for now and head north into Mount Pang Lai.

To reach the area that the King mentioned back at The Last Bastion, you'll need to trek up the mountain. Begin by following the path until it opens up, coming back on yourself to the south to find the first Sparkly Spot containing a Spellbound Bough. Follow this path to the northwest to find a hidden chest containing a Mini Medal among the long grass. Continue to follow the path up to the Camp to rest along with saving your game. Head east from the camp and shimmy around to a Sparkly Spot containing a Dieamend before entering the Base Cave.

Follow the linear path until you come across a glittering Dragon Rider, defeat it and mount it to gain the ability to fly around the area by holding the [R2] button to Flap higher. Using the dragon, fly up the ledges and then search the western wall for a Sparkly Spot containing a Rockbomb Shard. Continue along and up to the next open area, heading to the northwest to find another Sparkly Spot containing some Fresh Water. 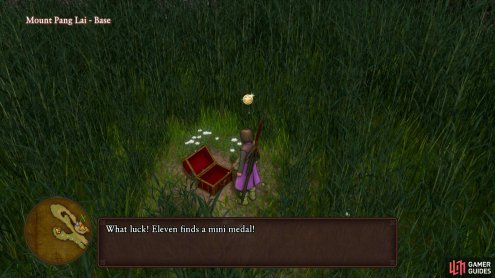 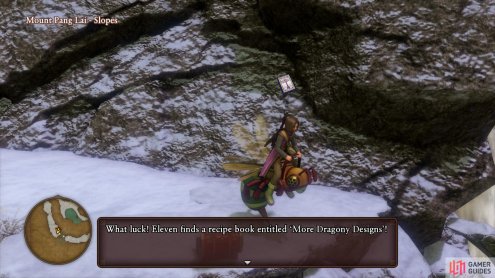 Back out on the snowy path, head forward and defeat one of the glittering Honeyhead Horknights to grab yourself another mount. Continue along across the bridge and open the chest on your way to obtain a new Recipe Book, More Dragony Designs. Continue up the path and ignore the entrance to the town for now, instead opting to fly over the water to a Sparkly Spot containing another Enchanted Stone. If it's currently night time, you'll find a Sparkly Spot containing a Lunaria to the west of this location. Finally, follow the path to the east to discover the final chest containing a Staff of Antimagic. With all the items looted on the mountain, head back to the entrance of the town and head inside. 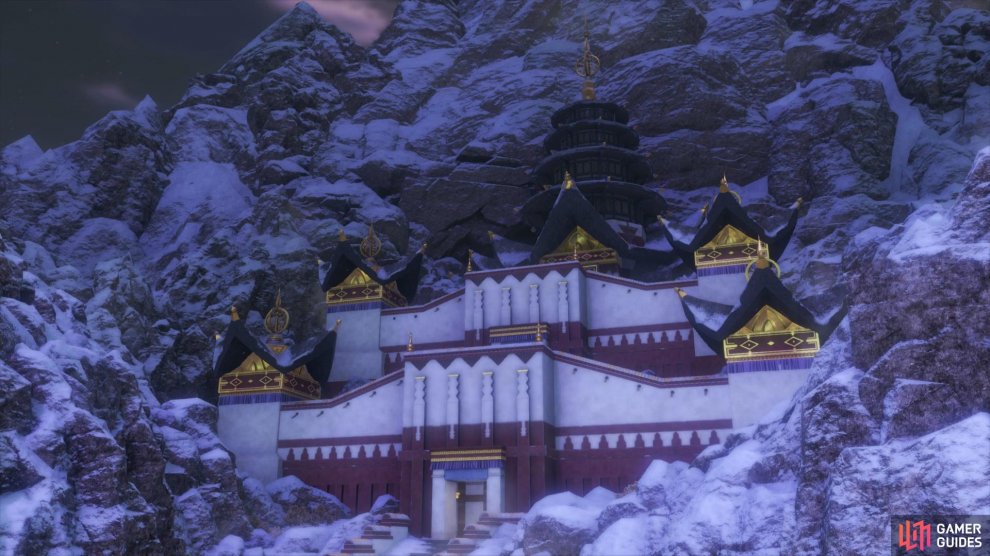 As you enter Angri-La, you are surrounded by monks before the High Lama steps in. After the pleasentries are exchanged he will ask you to meet him in the High Hall. Before heading straight there however, take the time to explore Angri-La and loot the items here.

Head into the Lower Level and search opposite the Inn to find some pots to smash containing 80G before heading into the Inn itself to find a chest housing an Ethereal Stone. Make use of the Inn should you need it and then check out the Item shop, purchase some Dragon Hides and Horns if you don't have many as they'll be useful for the Recipe Book you just picked up. You can also consider purchasing an Ice Axe for Hendrick if you didn't have the materials for the King's Axe. 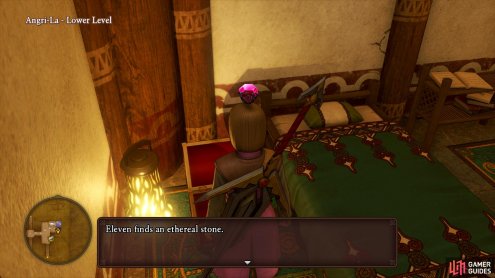 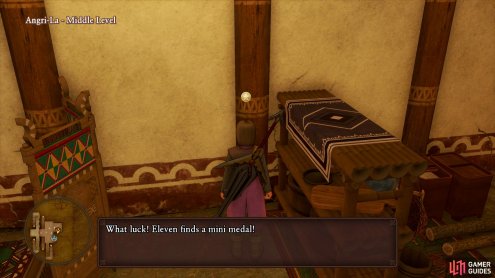 Head up to the Middle Level next and search outside to find some pots to smash containing a Seed of Therapeusis. Head inside and search inside the room north of the Priest to find another pot with a Mini Medal before saving your game if you need to. Head up the stairs to the Upper Level now and enter the High Hall to meet up with the High Lama.

The High Lama will tell you of the duty of Angri-La, to train the young Prince's of Dundrasil for six years. After the exchange, head up the stairs and into the Grand Master's Chamber where you'll find a wardrobe containing a Magic Water. Return down the stairs and follow the High Lama east to the Field of Discipline, he'll teach you some more of Erdea's history before you spend the night feasting away in Angri-La. 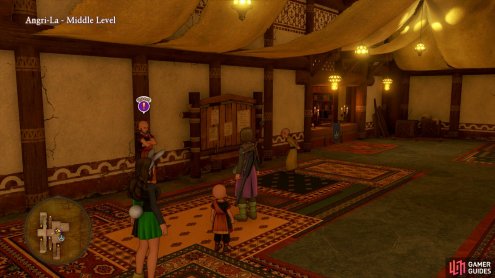 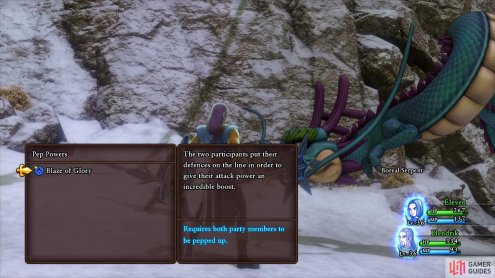 The next morning, head outside to discover that a disciple is delivering grave tidings to the High Lama. A hermit is at the top of the mountain infested with monsters and Hendrick and the Hero offer their assistance in retrieving him. Before setting off for Mount Pang Lai, head back down to the Middle Level and speak to the man near the priest who will offer you a challenge, agree to accept Quest 27 - Understanding Angri-La. You'll need to head out to the mountain path and defeat a Boreal Serpent with the Pep Power Blaze of Glory, an easy enough endeavour. Once successful, return to the man to complete the quest and obtain a Mystic.

Regardless if you've finished the quest or not, make your way out of Angri-La and head to the cave to the east, the man will now let you pass to enter the Summit Tunnel.

The path to the top of the mountain is short and there's only one chest to find. On top of that, there are no new monsters to fight here too (other than Black Dragons you fought back in Heliodor) so you should know what to expect.

Begin by following the path until you reach the first glittering Dragon Rider, defeat it to snag yourself a mount and begin following the path until you reach a large lake. Fly over to the northwest and land on the small island, a chest rests here containing a Sorcerer's Ring. Fly back over the lake and follow the linear path back outside to the Summit. 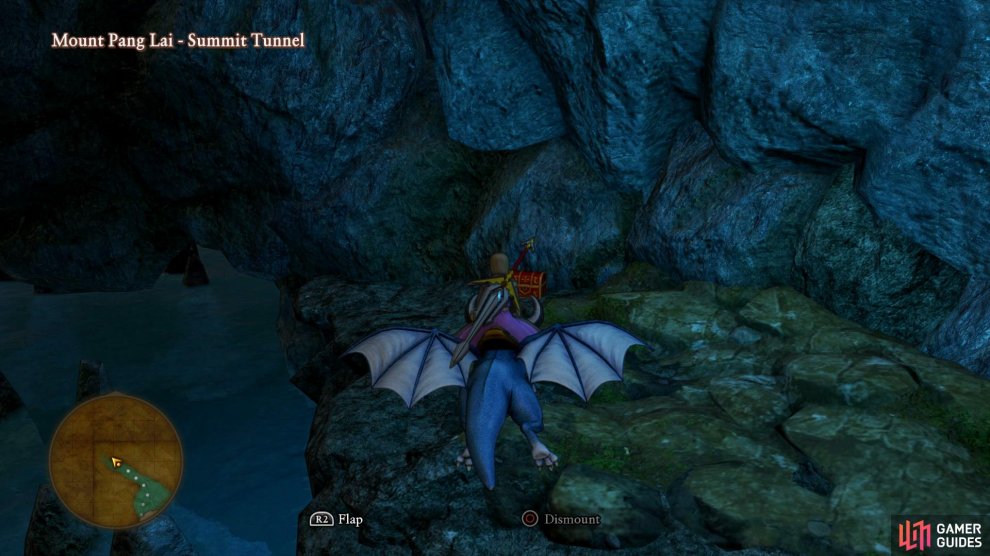 Follow the steps to the top and when you regain control of the Hero, make use of the Camp. At long last there's a new Greatsword for you to forge for the Hero in the form of the Wyrmfang and consider reworking the Ice Axe for Hendrick if you purchased it. Be sure to rest at the Camp and save your game before approaching the hermit. After the revelation of discovering that the hermit is in fact Rab, the Hero decides to go into deep meditation to try and bring him back.

This dark gloomy place looks similar to the Fields of Discipline back in Angri-La. Head forward and speak to the woman who will inform you of what the Void is. Head through the door in front of you to meet up with Rab who is deep in training. As Rab learns the secret technique from the Age of Heroes, Grand Master Pang wishes to teach the Hero a technique too. In order to expedite your training you'll need to spar against Rab, make sure you're prepared and then speak to Pang to begin. 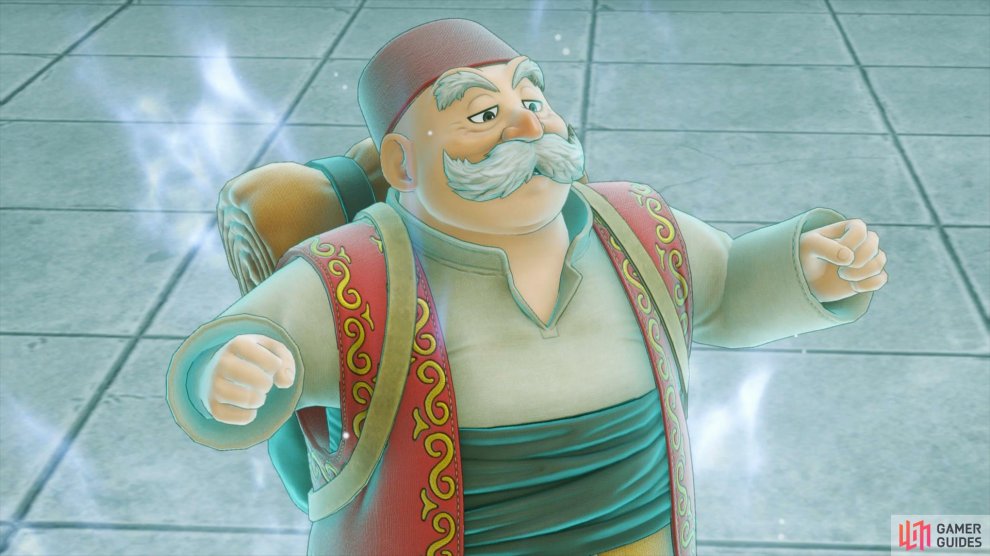 The battle against Rab is a rather unique one in that your objective is not to defeat him but rather continue using your new skill, Quadraslash, to increase its power with each cast. Rab only has 500 HP but can summon copies of himself with an additional 100 HP each. 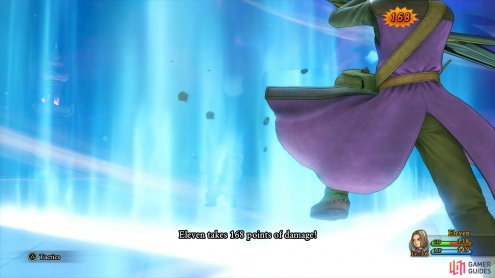 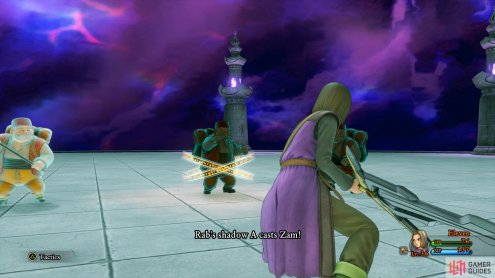 Rab's most damaging attack is his new skill, Pearly Gates however you can prepare for this in advance. On the combat round before using this, he will prepare himself, this is your cue to defend for the next round and limit the damage. If your HP drops below 150 then be sure to use Moreheal on yourself before returning to casting Quadraslash. After using the skill for the fifth time you will defeat Rab and power up the skill.

Tip: Quadraslash is a great skill that deals large damage to all enemies. This is especially useful for Greatsword users due to the Giga skills being group based.

Mordegon finally catches up with you here in the Void however Rab and the Hero combine their new techniques to unlock another secret power and push him back. Upon waking up, the Hero falls into a deep sleep and is taken back to the Temple to recover. Once you regain control, head down the stairs and out of the High Hall to meet up with Rab (who has rather quickly regained his weight) and the others. You'll gain direction on where to head next as Rab suggests to head out to look for your missing companions. Rab will also rejoin the party with an expanded Character Builder.

A Disciple Worthy of the Name

Awarded for overcoming a taxing trial and mastering a secret skill.

With Rab's new Character Builder, consider taking him to the left of the Enlightenment tree to obtain the very useful hidden panels there. There's also a new side activity available for you now, the [Wheel of Harma] found where the Field of Discipline is however you won't be able to handle the harsh restrictions until your party sits around Level 50+ so ignore it for now.