When you arrive outside the Travel Agency on Lake Macalania, you'll find Clasko and a Chocobo outside. Speak with them if you want, but the main feature is the Al Bhed Primer Vol. XVI further to the west. And, of course, the Agency itself. Save and heal inside, and shop if you feel like it. (Most of the stuff you'll find - here or at O'aka's - isn't worth the money you'll spend on it, either because it's simply too expensive or it's simply inferior. Oh, and the Agency's item shop is better as it's cheaper.) 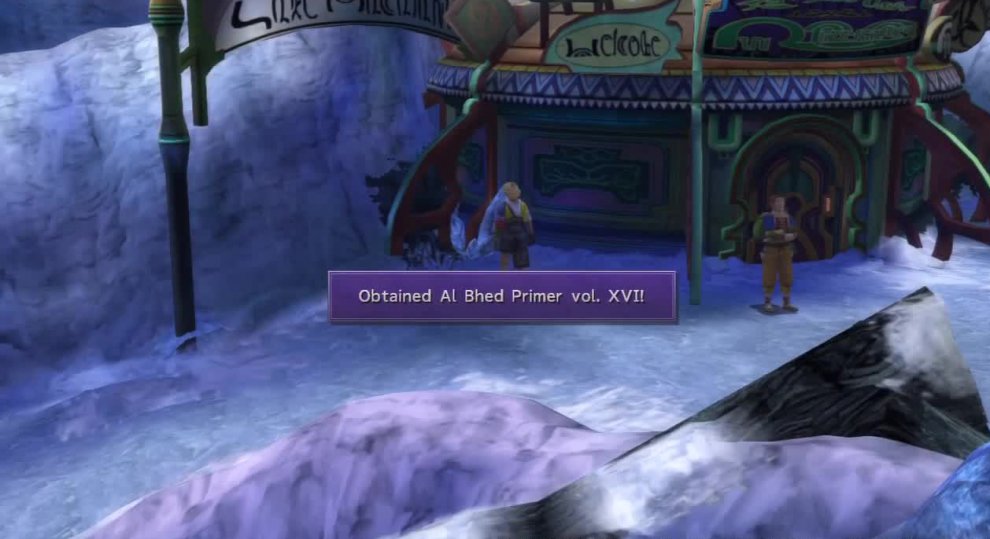 Once outside, go along the path further ahead onto the lake itself and, as you do, there will be a scene before you fight a good ol' machina.

BOSS ANALYSIS : Depending on how you fight this, this can be the most annoying fight you've had so far. The Negator's main and only purpose here is to prevent any use of magic, even Aeon Summoning. Whether you choose to knock it out is up to you; it can make hitting the Crawler's weakness of Lightning with Thundara easier, but Mana Beam can happen, too... Hence, the two strategies below.

Anyhow, the Crawler's offense consists of several attacks. It can use Gatling Gun for eight random-targeting attacks, so expect each character to take at least 300 damage. That's all the Crawler will use... normally. With the Negator gone, it can counter anything you throw at it with Assault , which tends to hit for 750~950 damage. More importantly, if you eliminate the Negator, the Crawler will immediately begin to countdown to a Mana Beam (3 turns): it's a non-elemental magic attack that hits everyone for 1,000~1,500 damage, which is extremely nasty, if not outright deadly.

PHYSICAL STRATEGY : This is the strategy I recommend, as it gets rid of the worry regarding the Mana Beam. While you can be under threat from Gating Gun, that is a fair deal weaker than Assault or Mana Beam by several times. For this, it would be ideal to use Tidus, Auron, and Wakka or Kimahri; basically, whoever has the highest Strength and some Thundertouch/Thunderstrike weaponry. Rikku can also do some work with elemental mixes and the like. For the most part, it's an all-out offense in this fight: just wail on the Crawler until it's dead. Heal as needed. Et cetera. While the high Defense of the Crawler will make it take a while without Lightning weaponry, it's better than the potential OHKO of Mana Beam.

MAGICAL STRATEGY : Before we go on about this, it is of the utmost importance that either Lulu has more Agility than the Crawler (21 or more) so that she can get in multiple turns, or that someone else other than Lulu has Black Magic. This latter aspect is more abusable in the Expert Sphere Grid, especially with minor grinding and backtracking. This second magic-caster doesn't have to be good at it; it's simply to abuse a counter in the game.

Anyhow, begin your offense with Wakka: for the most part, he is the only one able to hit Negator, so do that. Have Tidus boost everyone with Cheer (mostly for the Defense boost) and Lulu use Focus for her Magic boost or Reflex for an Evasion boost, whichever you prefer. Once the Negator goes down, switch out Tidus for Yuna to do some healing and Wakka for your secondary magic-caster or Tidus if you're confident in Lulu.

This offense should basically have Lulu cast Thundara four times on the Crawler, an effort aided by Tidus's Haste/Hastega (or Slow on the Crawler, or both). After four magic attacks, a new Negator will be spit out. Normally, this would be bad since it negates your magic-oriented offense, right? However, Mana Beam - which the Crawler is charging up in the interim - will also be nulled! If you can get in the four Thundaras needed before the Crawler is done charging Mana Beam, you will negate Mana Beam. This would seem like the better strategy, but remember that you can suffer some pretty nasty damage from Assault. Be sure to keep Yuna healing or using Protect for this phase for sure. Once Negator number two pops out, revert to your original party and loop.

After the fight, there will be a few revealing scenes before you head off to the Temple.