Once you've solved the puzzle comprising Zanarkand's Cloister of Trials, the area darkens except for the gap in the second, larger room. SAVE FIRST , then go in there.

BATTLEFIELD ANALYSIS : Before we get anywhere with this fight, it will be prudent to understand the battlefield situation. This battle will take place with your allies on six different platforms around the boss, who is the center of the six. Look at the diagram below for example: the red platforms are you, and the blue circle is the boss. At any given time, the boss is facing one platform, right? (Like in the picture, he's facing the lower-right one.) That platform and the two next to it are at risk from most attacks. (The whole region is divided by the dashed line, with "X" circles marking those in danger.) Use this information wisely - remember, you can switch platforms on a turn.

BOSS ANALYSIS : Spectral Keeper is actually pretty adamant in his offense, sticking to Berserk Tai l most of the time. It will hit one character for 750~1,250 damage and induce Berserk. That's bad, even moreso than under normal circumstances. See, the Spectral Keeper will counter any action against it with an attack to the three tiles it is facing, typically hitting for over 1,250 damage. At times, he will also use Glyph Mine . Glyph Mine infects two of the six platforms (completely random - may or may not be yours) with explosives, causing them to KO anyone on them two turns later.

If you happen to summon an Aeon, just expect to see three turns of attacks and Glyph Mine every four. Aeons get their own separate platform, so it's basically one on one, but Glyph Mine will be implanted on theAeon's platform and kill them ... if you don't Dismiss them!

MAIN STRATEGY: With this fight, you NEVER, EVER want your three characters together: keep one platform between each of them, always. Logic would say to put everyone behind him, but the boss is prepared for that: Berserk Tail allows a change in direction, and then that Berserk causes an uncontrolled attack, then comes a counterattack.

Offense-wise, you will need to be very, very conservative as well. Bring in your strongest attackers, then two support units. I tend to use Auron for the offense, Yuna for the main support, then I swap around for the secondary support. Your support should open with Hastega and Protect on everyone, after which you're pretty much set: just keep someone able to use Esuna or Remedies with you. It's a slow and lengthy battle with only one offensive unit, but it's a lot better than getting screwed over by a Berserked character.

ALTERNATIVE STRATEGY - BERSERKPROOF: Berserkproof is an ability you can customize onto armor for 32 Hypello Potions. Hypello Potions are found on the enemies Mafdet, Murussu, and (the more recent, as in the Calm Lands) Shred. To get them from any of those three, though, you'll need the Bribe ability, which means a possible bit of grinding. In any case, you can Bribe a Shred for 19,500 Gil to get 25 Hypello Potions, so you'll need 39,000 to get more than 32 (50). Put it on some piece of armor for someone (preferably your whole party, actually).

Once this is done, you can go for a more traditional offense: two offensive units and one support. I still like to use Tidus, Auron, and Yuna for this. Tidus does good for Hastega and Yuna for Protect and Curaga. After this, Tidus and Auron go on the offensive while Yuna uses Curaga every chance she gets to deal with the myriad Berserk Tails and counterattacks. You won't have to worry about ailments due to Berserkproof; Glyph Mine will be the main problem, but you'll live through that - simply Move, then stop attacking until you can spread out the party once again.

This strategy works very well in conjunction with the Provoke skill. In doing so, every attack will go towards the Provoker, who ought to be your bulkiest character Defense/HP-wise. Buff them with some Protect and have them simply Defend every turn, quartering the damage they take down to 500 or less easily. Heal them every now and then while two others tear the boss from the rear.

ALTERNATE STRATEGY - AEON BATTLE : Honestly, this is the method I prefer most over all of them. You can easily fight well with Aeons here. It is recommended you open your battle with the human characters still with Hastega and Protect - you'll be Dismissing regularly, so it wouldn't be bad to insure those extra turns. When you Summon your Aeon, it's preferred to Summon Bahamut if he can heal himself, or Shiva if not. Shiva can do pretty nasty damage, and a self-Blizzara every two or three turns can suffice for healing. Just wail on the boss and Dismiss every four turns (of the boss) when Glyph Mine is implanted, then re-Summon after the mine blows, playing defense in the meantime. Simple, but it works, especially in conjunction with already-full Overdrive gauges and Grand Summon.

After defeating the Spectral Keeper, use the elevator that appears down to the lower floors. There will be a cutscene before you can go on to the next area. Save and progress into the Chamber of the Fayth. There will be a scene there before you encounter what may well be the second-hardest main boss of the game.

BOSS ANALYSIS - FIRST FORM: This boss will take place across three different battles, so you know. The first form is very status-heavy to most of you. Yunalesca's main offense relies on two attacks - a basic physical that removes everything positive on you but Reflect. That's the big problem. You can also expect to see Absorb, which deals damage equal to 50% of your max HP, healing Yunalesca for the same; it's used on the highest-HP character. She'll alternate between these two attacks. If you happen to attack physically, you'll be hit with Blind; magically, you'll be hit with Silence; with anything else, Sleep.

MAIN STRATEGY: You'll want to open the fight with Yuna, Rikku, and a good offensive unit. Begin the fight by throwing up Reflect on everyone, and do NOTHING before that is achieved: Reflect will bounce back the Blind, Silence, and Sleep counters, making life a lot easier for you. From there on out, let Rikku take care of the healing (Al Bhed Potions + Alchemy = 2,000 HP) and your offensive unit Attack. You'll see a fair bit of the physical and Absorb, but the physical is weak (~400 damage), and the Al Bhed Potions should help in keeping the highest-HP character above 50% to prevent their death.

BOSS ANALYSIS - SECOND FORM : For this form, you'll see an opener in Hellbiter . Hellbiter hits everyone and inflicts Zombie on them; the damage itself is around 600~1,000 if you're unlucky. It will be used again if your entire party is cured of Zombie. Thusly, keep your highest-HP unit in Zombie. You will also see Cura and Regen here to deal damage to Zombied units, and also the Absorb and basic physical from the previous form; same effects, too.

MAIN STRATEGY: Simple enough. After the opening Hellbiter, un-Zombie one or two of your characters. (Not all three or it'll just happen again - that is a good reason to NOT have Auto-Med on you.) The third character (the Zombie) at minimum needs to have Reflect on them; this will bounce back the boss's recurrent Cura and Regen. Admittedly, Yunalesca will be healed, but there's nothing you can really do about that - it's better than dying. If your offense is physically-oriented, you will benefit by simply Shelling Yunalesca to halve the effects of Cura. You can also Dispel Regen, of course.

So, for this battle, you'll want to keep a party of a support unit and two offensive units: for me, that meant Tidus, Yuna, and Auron. Tidus and Auron stuck for the main offense (plus, Hastega is always nice) while Yuna focused on healing, Reflect, Shell, Protect, and Dispel. You won't be able to heal the Zombied character, by the way, so try to Protect everyone; it'll help weaken that basic phyiscal attack.

Close to the end of the battle (TRUST ME, IF YOU DO NOT KEEP AT LEAST ONE PERSON IN ZOMBIE, YOU WILL HAVE A GAME OVER!

BOSS ANALYSIS - THIRD FORM : Without exception, Yunalesca opens this battle with Megadeth - excuse me, Mega Death . As you might expect, this is Death against your entire party, and it is 100% accurate - the only way to avoid it is to be in Zombie, and if you're not in Zombie, then you lose outright. She will also use this periodically in the fight. You'll also see a number of familiar attacks: Hellbiter, Curaga, Regen, Absorb, and that basic physical. You will also see Mind Blast , which hits everyone pretty hard and inflicts Sleep, Confusion, and Curse.

There is a set pattern here, too. First is Mega Death. Second comes Hellbiter, or Curaga or Regen if there are no Zombies. Third is the same as the second, then there's Mind Blast, another Hellbiter/Curaga/Regen turn, and then Mega Death. It loops.

MAIN STRATEGY : If you only had one person in Zombie when the change in form occurred, hurry up and use a Mega Phoenix, then Phoenix Down the guy that went down and X-Potion him; if you had two, Phoenix Down the remaining one and hit 'em with an X-Potion. Reinstill any of the good statuses (Hastega, Reflect, Protect) that you can as well. As it stands, keeping your characters in Zombie is about the only thing worth doing; it takes far too much time to heal them all, so you'll just have to rough it. Hopefully Yunalesca will begin to favor some of your characters so not everyone dies simultaneously.

In any case, once Reflect is up, also Shell Yunalesca to stop Curaga from being so damn beneficial, and be sure to hit her with Dispel when Regen comes up. Revive anyone who dies and be sure to keep up a powerful offense. 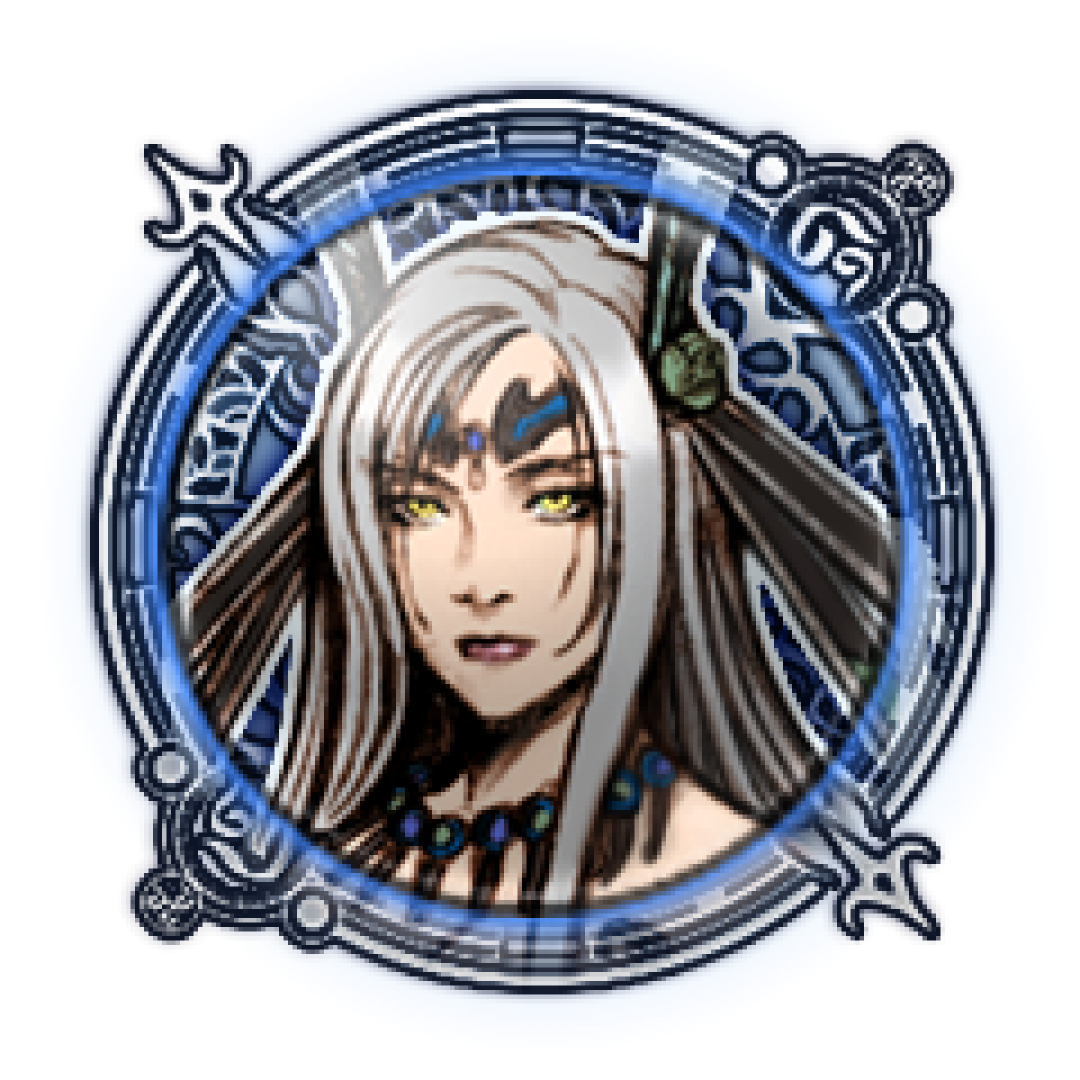