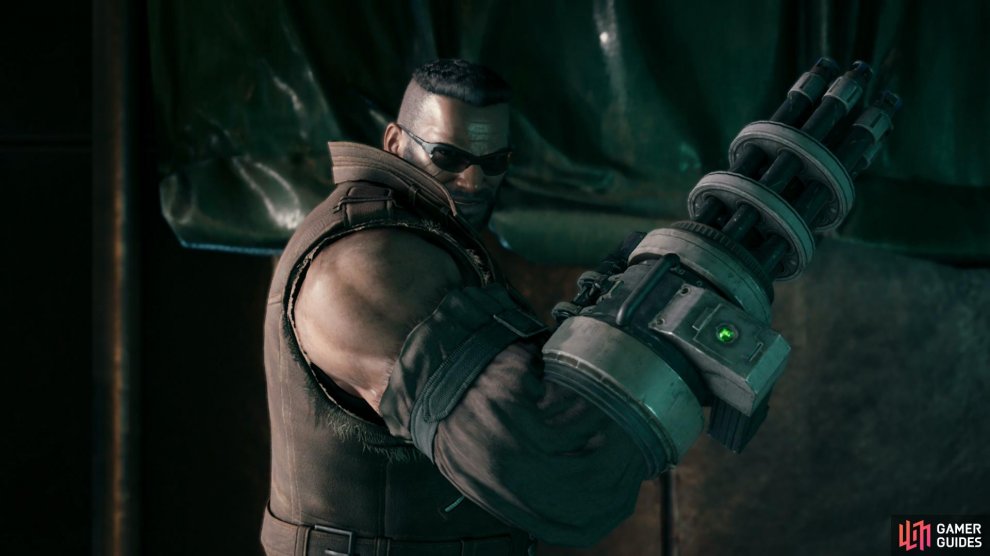 Barret's an odd mix of tank, secondary damage-dealer, and ranged attacker, although it can take him quite a while to truly come into his own in many of these areas.

Possession the most HP and VIT in the game, Barret's qualities as a tank are readily apparent, even before you consider his abilities. While Cloud's tanking revolves around counterattacks, Barret is more traditional, reducing damage and knockback with "Steelskin" and absorbing damage meant for others with "Lifesaver". Give him Steadfast Block Materia and buff him with Regen and he'll be able to soak up damage quite well.

In terms of offense, however, Barret struggles, especially early on, where his machinegun volleys fail to impress compared to what Cloud and Tifa offer. "Focused Shot" is inferior to both "Focused Strike" and "Focused Thrust", and this is in no small part due to Barret's low SPD, and hence, slow ATB accumulation. Once he obtains his Big Bertha weapon and its "Maximum Fury" ability, however, things change for the better, as it provides Barret with a fine means of both interrupting opponents and dealing significant damage.

In later battles (especially in some of the tougher Hard difficulty fights) Barret really shines, as he can relatively safely soak up damage while guarding and building up his ATB in the process, sneaking in a few shots between enemy attacks. His ranged weapons make it easy for him to target enemy weakpoints, and the fact that "Maximum Fury" can be used via commands (as opposed to, say, Cloud's Punisher mode or Tifa's ki abilities) means you can safely switch characters after Barret has built up his ATB and command him to use "Maximum Fury", which may also allow other characters to land a few hits should the enemy be interrupted.

Range is also a boon for Barret when it comes to Limit Breaks, as some enemies have the audacity to evade more range-challenge limits (like everything Cloud and Tifa have to offer). Catastrophe, on the other hand, is a pretty safe bet, making Barret a great choice for Gotterdammerung.

Simply put, Barret gets off to a slow start, but by the end of your Normal difficulty playthrough he should become one of the more indispensible characters in the game - the stronger and more elusive the foe, the more you're going to want him on your team.

There are two candidates for "best" weapon for Barret, best, of course, being fairly subjective depending on what you're trying to accomplish. The EKG Cannon is a fine enough weapon, boasting high Magic Attack and HP, as well as a variety of abilities that boosts damage in various forms and under different conditions. Reprieve doesn't hurt, either. The Light Machine Gun, however, is our go-to weapon for Barret, as it also boasts Reprieve, Healing MP Cost Reduction, Physical Damage Reduction when Guarding and Buff Duration Boost, all of which help him tank better.