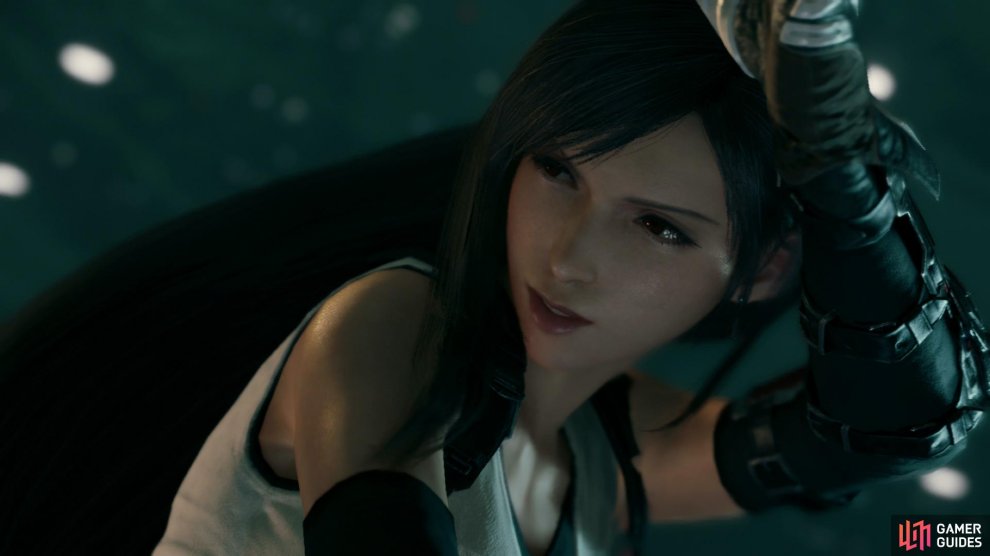 Tifa excels at one thing: dealing damage. Fortunately for her, this is rather important aspect of the game, and she's good at both inflicting Stagger, needling enemies with quick, powerful attacks and punishing Staggered foes with overwhelmingly powerful combos. She doesn't have the crowd control that Cloud has (courtesy of "Triple Slash") nor the range and reliability of Barret's attacks, but if you just need to dish out a ton of damage to one terrestrial foe, nobody does it better than Tifa.

Stats aren't everything, something Tifa is doubtlessly thankful for, as she only has the top marks in LCK (tied with Cloud) and SPD, otherwise having the third lowest HP, MP, MAG, VIT and SPR. Abilities are what matter, and Tifa's fortunately well-endowed with these, and whatever the quality of her abilities, they're bolstered by how fast her ATB gauge charges. For example, "Focused Strike" may be inferior to "Focused Thrust" on a case-by-base basis, and "Braver" certainly out-damaged "Omnistrike", but the speed at which Tifa can charge and use these attacks easily makes them comparable, if not superior. After all, Tifa can often charge and use two or three "Focused Strikes" in the time it takes Cloud to charge and use one.

Ki strikes are the core of Tifa's offense, however, and it's a rather unique mechanic. At its base ki level she'll have access to the "Whirling Uppercut" attack, but you can expend an ATB segment to use the "Unbridled Strength" ability to boost her ki level by one. At ki level two she can use "Omnistrike" and at ki level three she can use "Rise and Fall". Using one of these attacks will drop her ki level by one, so you could use "Rise and Fall" and "Omnistrike" in quick succession if you charged her ki level up previously. The benefits of expending ATB when it's convenient to store up these powerful attacks should be obvious, and while they have a time limit (her ki level will gradually degrade over time) it's long enough that you'll rarely have to worry about wasting a ki level. Later on in the game Tifa will obtain the Feathered Gloves, from which you can learn the "Starshower" ability. "Starshower" deals a fair amount of damage in its own right, but also "increases the strength of the next command", which makes it a great way to start out her power combo: "Starshower", "Rise and Fall" and finally "Omnistrike". Of course, most foes aren't going to stand around and let you pelt them with these attacks, so it's best used against Staggered foes, or enemies you know you can hit with these attacks. In most combat situations, just charging up to "Omnistrike" and using that is a fast, relatively reliable way to deal heavy damage, as it has a moderate area-of-effect. More importantly, it's fast, so you can command Tifa to use "Unbridled Strength" even when you're not controlling her, switch to her, use "Omnistrike" and switch back.

As for Tifa's weapons, Purple Pain allows her to do what she does best: damage output. White it doesn't have the highest base Attack, it does have numerous other ways to increase damage in a variety of circumstances (critical hit rate/damage, Unbridled Strength damage, critical hit rate with low HP), a nice amount of HP and SPD boosts, and of course, Reprieve.