You’ll have three party members available to you for this battle (or Cloud, Tifa and Barret if clearing this as soon as possible) and your opponents are still nothing overly difficult. To make life easier for yourself, consider slotting Elemental-Fire on Cloud along with making sure to cover Ice and Lightning elements across your other characters. Once again, remember that you’re unable to use items in here so be sure that at least one character has Healing/Revival Materia set and Cleansing can be useful too.

To get things started, you’ll be up against an Elite Security Officer, an Elite Shock Trooper and a Ghost, all of which are weak to Fire. You should be able to make quick work of the Shinra Grunts but the Ghost needs special care, make use of Fire based spells until it casts Reflect, then close in with Physical Attacks to finish it off. Additionally, the Ghost has a Turbo Ether that you can steal, making this a good source of them should you care to repeat the matchup.

Next up is a Helitrooper flanked by two Cripshays with the Helitrooper being your primary concern. Cast either Fire or Wind spells to knock it down or switch over to Barret and make use of the Overcharge-Maximum Fury combo to take care of it as quickly as possible. The Cripshays shouldn’t pose too great a problem after the Helitrooper is gone but just remember to switch to another character if you’re caught up in Leech. 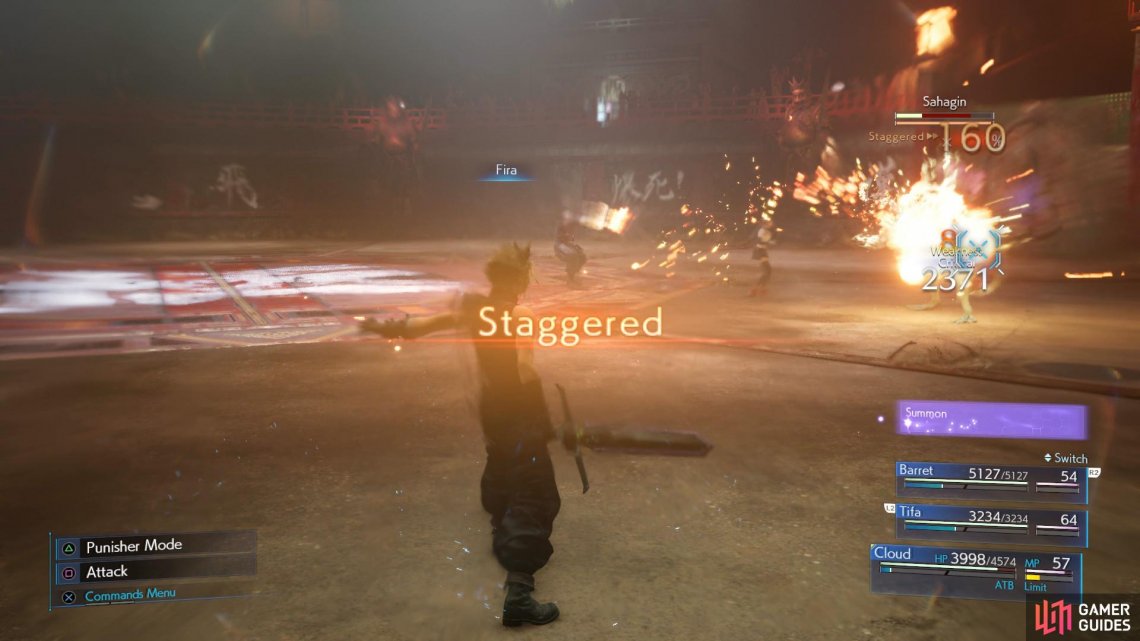 Fire will make short work of the Sahagin in this round.

The next battle is against a tricky Sahagin flanked by two Elite Grenadiers who should be your first target here, a simple Triple Slash is more than enough. The Sahagin needs more attention however, focus on striking it with Fire spells to raise it’s Stagger gauge and then close in with physical attacks once it’s Staggered. Remember to stay away when you spot it using Harpoon Hurl as you’ll be inflicted with Toad, the last thing you want in a Colosseum battle.

Round 4 sees you up against a Scissorclaw, Elite Riot Trooper, a Sentry Gun and a Laser Cannon, an interesting group to say the least. To begin with, the Scissorclaw is the most difficult foe here due to it having the ability to use Guard and block melee attacks. Instead, focus on using Fire spells to dispatch the Elite Riot Trooper as quickly as possible before focusing on the Laser Cannon and Sentry Gun with Thunder spells. Finally, make use of the Ice Materia (or Chi Trap/Blade Burst) you should have set to easily Stagger and defeat the Scissorclaw. You’ll want to change between characters often here to make full use of the ATB charges they have, Barret is especially effective at striking the Laser Cannon and Sentry Gun at range. 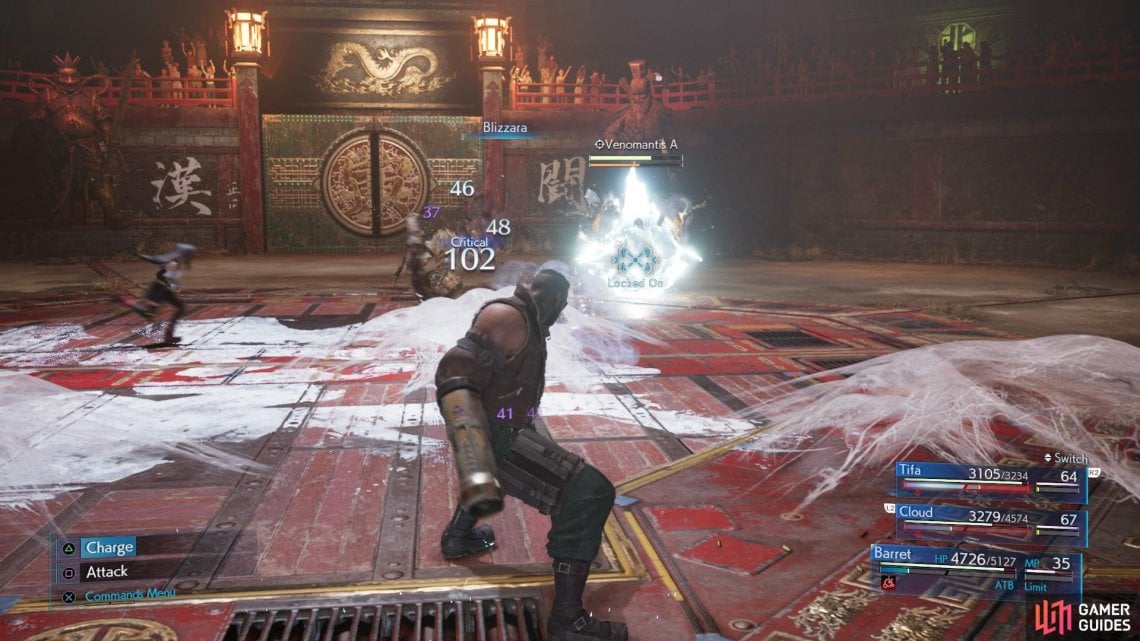 Focus on the Venomantis first with Blizzara(ga) to prevent them from Sleeping you.

The final battle is against a Queen Grashtrike and two Venomantis and it’s one that’s sure to be full of Status Ailments. As you may remember, the Queen Grashtrike likes to both Poison and Slow you with all of her attacks while the Venomantis will put you to Sleep with the Torpid Sting ability along with its regular Poison based attacks. For this reason alone, make the Venomantis your primary target and use Ice based spells along with useful abilities such as Maximum Fury, Starshower and Triple Slash to take them down. Should someone get inflicted with Sleep, cast Esuna as soon as possible (unless your Esuna carrier was Slept), the last thing you need is everyone out of action. As for the Queen Grashtrike, she has a lot of HP but is a lot more manageable once you’re alone with her, once again, Ice spells are king here.

Your reward for this tournament are the Tarot Cards accessory, this will extend the duration of detrimental status effects applied to others.