The first optional Shinra Combat Simulator are ones that shouldn’t cause too many problems, this one is Barret alone versus five single enemies and although they pose more of a threat than their Colosseum counterparts, a little preparation will make it a lot easier. To make life easier for yourself, slot Elemental-Fire to Barret’s weapon and make sure you bring along Lightning materia for the final battle along with the Healing materia as items are forbidden. Finally, be sure to bring along the Subversion materia, you’ll need it for the second round.

The first battle against the Sahagin Prince is arguably one of the tougher ones you will face in this competition. You’ll want to make use of Fire spells to bring his Stagger up, especially when it enters its Counterattack Mode, just remember to dodge out of the way of its Counterattack. Its crucial you learn to avoid Salientian Curse at all costs, this will inflict Toad on you and without the means to use Items, you’re stuck in the form until it wears off. Thankfully, it’s rather simple to avoid, once you see the name appear above the Prince’s head, get ready to roll/run to the side as he will cast it at your current location. 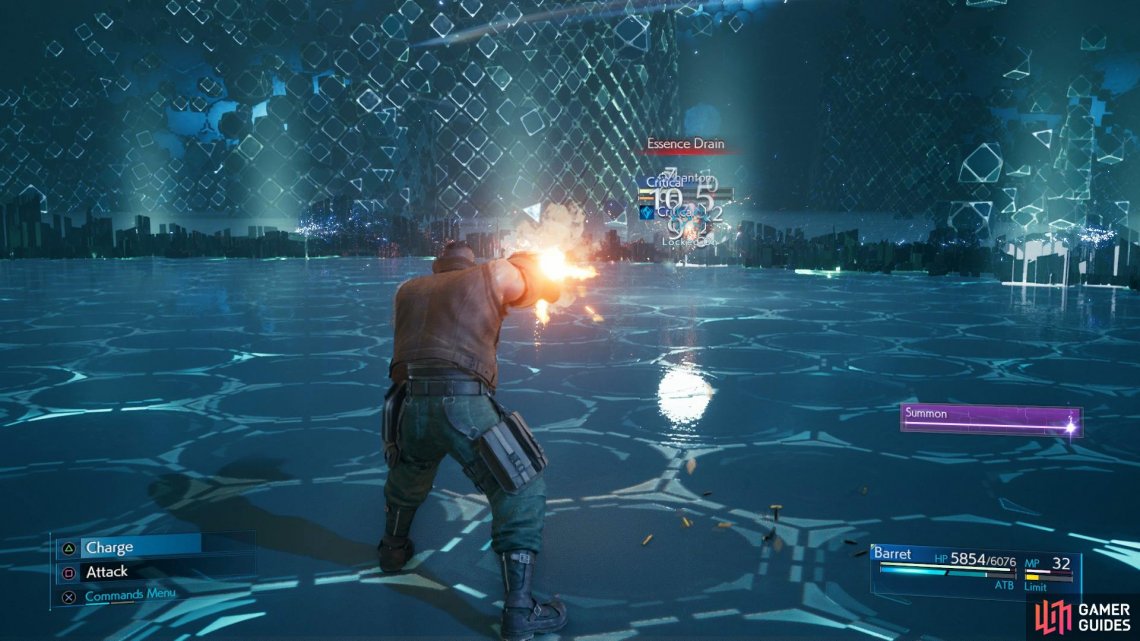 Barret can continue to damage the Phantom while its using Essence Drain.

You’ll be up against a Phantom in the next round and hopefully you remembered to set Subversion materia beforehand or else expect a rather long and frustrating battle. It will use all forms of Ice magic against you which should be easy enough to avoid however when it vanishes, it will reappear behind you and attempt to use Frozen Claw on you, another Ice ability that will deal heavy HP damage so keep moving once it vanishes. Finally, it’s deadliest ability is Essence Drain, this will cause it to drain HP from a large area around itself so be sure to back out of it if you see this (you can however learn Spirit Siphon from this ability). This is where the battle is easier with Barret as you can continue to still attack it from safety.

Round 3 pits you against a Grungy Bandit, a welcome battle after the two frustrating battles before him. The Grungy Bandit is extremely easy to bait into attacking and then dodging to the side, opening him up for attacks and Pressuring him at the same time. All of his attacks are well telegraphed and you can choose to run circles around him to bait him towards those attacks, what’s more, he’s vulnerable to Fire so you can make use of Fira to cut down the time it takes to put the Grungy Bandit down. Barret is a little slower than the other fighters but it’s still enough to comfortably bait the hapless Bandit.

The next battle will see you up against a 3-C SOLDIER Operator, many of whom you fought against during the climb to the Shinra Building in Chapter 15 so you should be well aware of how they fight. Their biggest threat is the ability to switch up physical attacks with magical attacks but they Stagger easily to being struck with physical attacks. It’s best to go on the offensive here and use Fira spells along with regular attacks to easily Stagger him and dispatch him with relative ease. Two Fira spells should be enough to kill him outright. 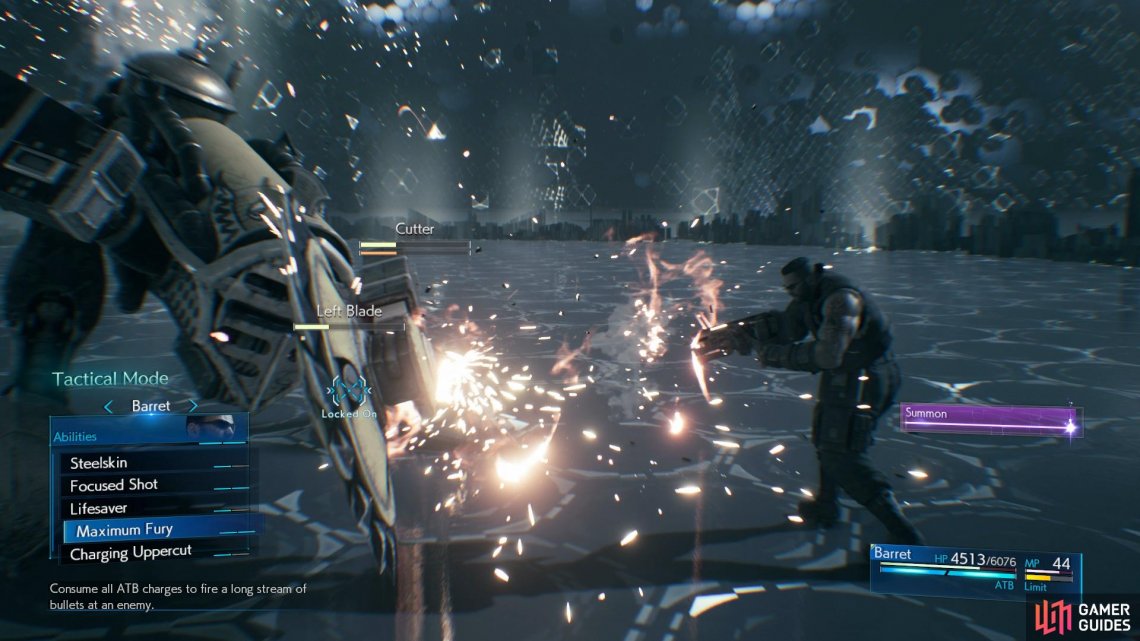 Maximum Fury is useful against the Cutter.

The final battle is a solo battle against a single Cutter and you’ve fought enough of these by now to know how to handle them. That is to say, make frequent use of Thundara(ga) to deal high Stagger damage to it and take down the arms to give yourself an advantage. The only real threat to really watch out for is it’s Silence Smog that will prevent the use of said Lightning based spells but even then, for a final battle, this should be a simple formality by now. A full two ATB Maximum Fury is especially effective against the arms, making the Cutter less of a threat.