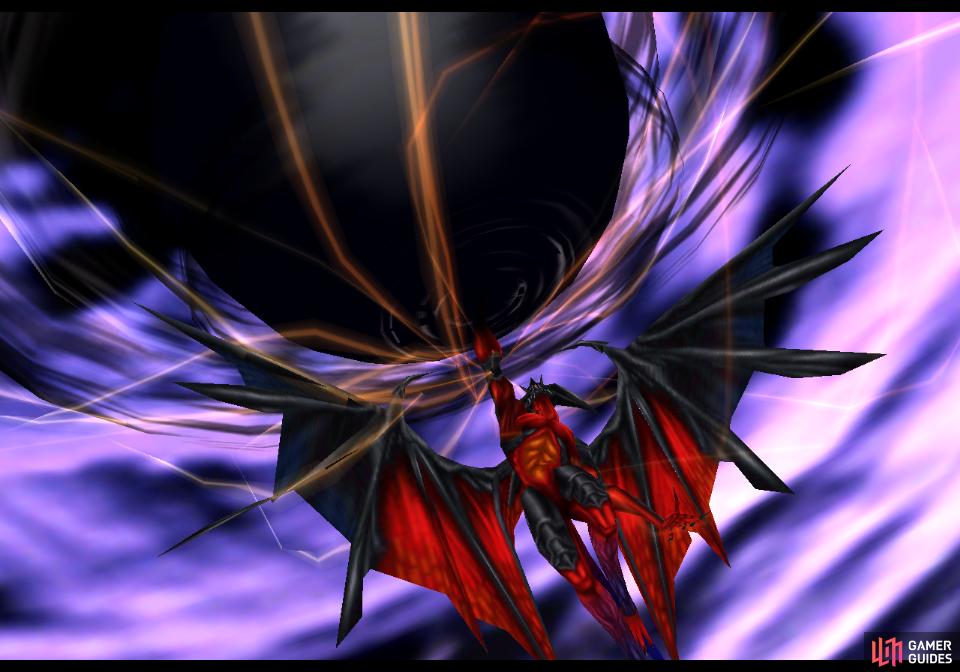 Easily the coolest-looking GF in the game, Diablos must be tamed before he’ll lend you his services. After the Seed Field Exam you’ll be given orders by Headmaster Cid to head to Timber. After he gives you these orders, talk to him again to acquire the Magical Lamp, which you can use at any time to summon Diablos. Defeat the GF in battle and he’ll join you. Diablos’ attack, Dark Messenger, is odd in that it doesn’t deal damage normally. Instead, it deals gravity damage equal to 1% of the targets max HP per level of Diablos. At its base level, level nine, Diablos will deal damage equal to 9% of each foes’ max HP. At level fifty Diablos deals damage equal to 50% of each target’s max HP, and so on. Whatever the percentage, this damage caps at 9,999. Unlike most gravity effects, which deal damage based on a target’s current HP, Diablos’s attack can readily kill foes, as it deals damage based on the target’s max HP.

Diablos starts out with Mag-J and can learn HP-J and the rare Hit-J, and since you can acquire him before traveling to Timber, he can serve as one of your cornerstone GFs. In this case, he shouldn’t be paired with Quezacotl, Ifrit or Siren… at least not initially, as you’ll want to spread those stat junctions around. Diablos is also the first GF to learn Ability x3, which should become eclipsed by Ability x4 when you start acquiring Rosetta Stones, but for now it’s a welcome boon.

Other interesting abilities include Darkside, which causes the character to deal 3x normal damage with their regular attack at the cost of 1/10 of their HP (Drain junctioned to Status Attack can counter this quite well). Diablos also comes with the much-appreciated Mag+20%, Mag+40%, HP+20%, HP+40% and HP+80% abilities.

Mug allows the character to attempt to steal items while dealing normal damage - an indispensable way to acquire some items. On the other hand, if you’d rather not fight Enc-Half and Enc-None will halve the encounter rate, or prevent random encounters entirely. Some set encounters and all boss fights are unavoidable, but it’s still an essential tool for keeping your levels low.

Diablos has two refining abilities. ST Mag RF allows Diablos to refine status-affecting spells out of items, notably the Meltdown spell from Mystery Fluid (great for reducing enemy defense and for junctioning to Vit-J) and the Pain spell from Curse Spikes (one of the better early-game Mag-J junctions).