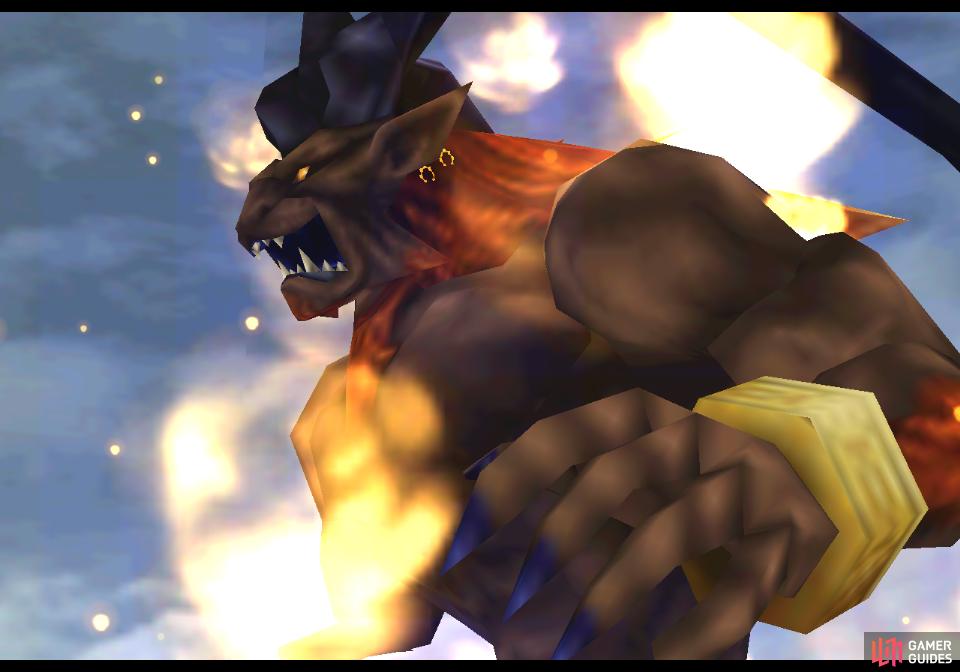 Ifrit is your basic fire GF. You’ll acquire him after defeating him in the Fire Cavern near the beginning of the game. His attack, Hell Fire, deals fire damage (base power 45) to all enemies.

A basic GF, Ifrit will bestow its user with Str-J and can natively learn HP-J, making it a fine junction for the early-game warrior. As is standard for elemental GFs, Ifrit also starts with Elem-Atk-J learned and can natively learn Elem-Def-J and Elem-Def-Jx2. It begins with all base command options, including Magic, GF, Draw and Item. Its Mad Rush ability is quite powerful in the early going, as it inflicts the party with Berserk, Haste and Protect - turning them into veritable melee powerhouses. Provided the fight at hand doesn’t require any finesse, it’s a fine way to turn off your brain and let your party whack foes to death.

Ifrit also learns Str+20% and Str+40%, which is a welcome early-game boost to your offensive powers, and this tree ultimately culminates in Str Bonus, which will increase the junctioned character’s Strength stat by 1 every time they level up. F Mag-RF will allow the player to refine fire magic from items, including the potent Flare spell, which, while powerful, is probably too much of a grind to bother with, especially with the perfectly acceptable Tornado more easily obtained.

Finally, at level ten Ifrit can learn Ammo-RF, which will allow you to create a variety of ammo from items (even other ammo!). If you want the Lion Heart weapon early, you’ll need to learn this. You can do so without leveling up your main party by just junctioning your GFs to Seifer during the SeeD Field Exam, KOing your other characters (Squall and Zell) and just dispatching foes with Seifer until you’ve made the gains you desire.