You can technically get started with this quest as soon as Balamb Garden becomes mobile, but you can’t complete it until after the events at Fisherman’s Horizon (after the party reunites and the Garden Festival ends). For the sake of completing the quest in one fell swoop, we’ll assume you’re doing this when you’re in control of Balamb Garden.

In any event, if you talked to random characters in Balamb Garden you may have heard of some group of card snobs lurking about, seeking new, dynamic players. You can prove you’ve got what it takes by winning numerous games around Balamb Garden - just play the gatekeeper repeatedly (you’ll need to have 15+ games under your belt, so if you’ve been neglecting cards you may have to play a bit). 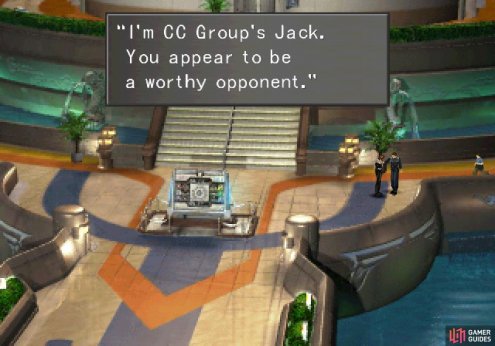 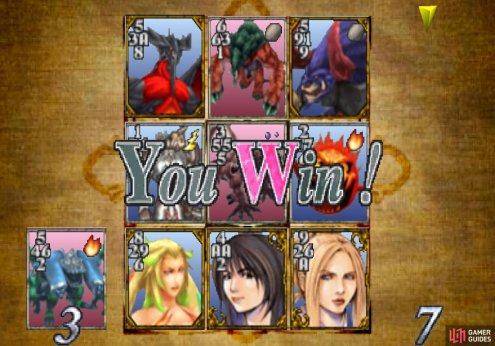 Once you’re ready, return to the 1st Floor Hall area with the elevator and directory and look for a male adult student walking around. He won’t appear in this area every time you enter, and it can take a moment for him to walk off screen, but you’ll know it’s him when you talk to him, as he’ll mention cards. If you have played the requisite number of games he’ll challenge you to challenge him when you’re ready.

He’s one of the weakest card players in the CC Group, which makes sense, as he possesses the lowest royal suit - Jack. The strongest cards he’ll play are Level 6 Boss cards, which makes him about as formidable as some of the players you may have played in the early parts of the game. Needless to say if you’ve been wise about abolishing rules and collecting cards, your formidable deck should thrash his thoroughly.

Emerge victorious and he’ll tell you about the structure of the CC Group, which of course is comprised of a court named after various card types and suits, in order: Jack,

More CC Group members await to be conquered, so let’s go through the Garden counter-clockwise and mop them up. First head up to the Training Center (having Diablos’s Enc-None will make this much less annoying) and when you reach the fork at the beginning turn right to reach the area with bridges spanning some water. At the end of a dock you may find a man in a green jacket who will sell you items if you talk to him, but if you challenge him to a game of cards he’ll admit to being "Card Magician Joker". Challenge him again and he’ll offer to upgrade your Battle Meter if you win.

Card Magician Joker - some title, but do his cards back it up? Well… mostly no. He can play Level 6-7 Boss Cards, but he’ll do so rarely. It’s tempting to stock up on them here, but you can find better opponents in this questline. He does have the rare Leviathan card, however, so you’ll want to play him repeatedly until he finally plays it.

Next up is Club. Head to the northern-most of the ring-hall areas (which connects to the Dormitory) and look for another male student. Talk to any adult male students you find and he’ll mention he’s Club, another member of the CC Group. He doesn’t have any cards of particular interest, so defeat him to move the chains then go hunt your next victim.

Return to the southern-most section of the ring-hall (the lobby with the elevator and the directory) and wait for the familiar pair of girls to walk up from the south and stop near the directory to chat. Doubtless you’ve seen them before, and they just so happen to be the Diamond Duo - collectively Princess Diamond, the next member of the CC Group, and the last two you can play if you haven’t been to Fisherman’s Horizon yet. Challenge them (they won’t talk about cards otherwise) and defeat them to earn the privilege to challenge the best card players in Balamb Garden.

Your next opponent is Knight Spade, who can be found in on the second floor, in the hallway/bridge just off the elevator. Like many Garden residents, he’s not always there, so exit and enter the screen until you find two male students standing in the hallway - the one to the right is Knight Spade. Impressed by your victory over Diamond, he’ll deign to play you, fielding Level 8 Boss cards (as well as other, inferior cards). Defeat him and he’ll mention another player, another new player whose rise through the ranks has been meteoric. Interesting… 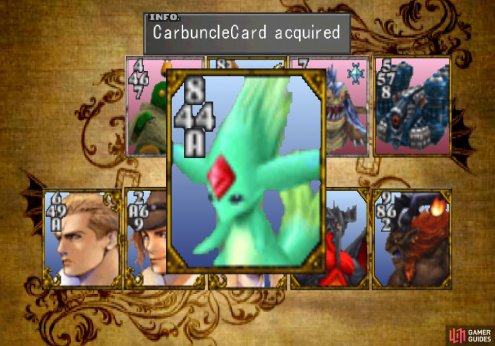 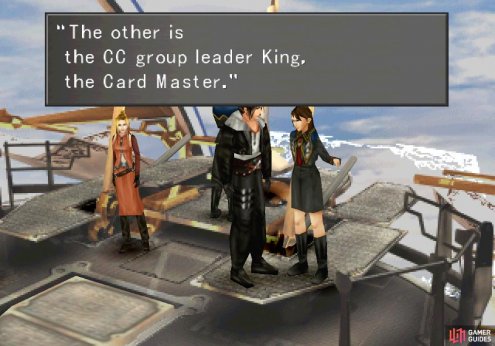 After the Garden is mobile you’ll be able to challenge the next member of the CC Group, who happens to be none of than Xu. Guess there’s some synergy between an understanding of tactics and card skills? You can challenge Xu as soon as the chatter is done on the bridge after you’re done with the Garden Festival - before actually piloting the Garden, in fact. Play her and defeat her to advance the quest, and keep at it until you win her Carbuncle card.

Emerge victorious and she’ll mention the only superior player in the Garden - the King of the CC Group. Finding this King will take a bit of sleuthing, so talk to Nida on the bridge and he’ll express his surprise at Xu’s membership in the CC Group, which Quistis claims to have known. Guess her and Xu are pretty good friends… Leave the bridge and head down to the Infirmary and challenge Kadowaki to a game of cards to learn about her own past affiliation with the CC Group.

With that done, go back to your Dormitory room and rest until the CC Group King arrives to challenge you.

The CC Group King is none of than… Quistis! Makes sense - Cid, Squall, Quistis and Xu, the leadership of Balamb Garden are a regular bunch of card nerds! Despite her vaunted title, Quistis isn’t significantly more difficult than most of the other CC Group members, fielding a mix of Level 8 Boss cards and lesser cards. She also has the Giglamesh card, and if you’re lucky she’ll play it on this first game. Either way, defeat her and she’ll tell you that you can challenge her again at any time… but only on the bridge. Makes sense. Go to the bridge and play Quistis until you win the Giglamesh card and put an end to the questline.

And with that you’re done with the CC Group. Time to go see how Balamb is faring!