You can start - or at least, you can complete - this quest after acquiring the Ragnarok in disc 3, after the events at the Lunar Base.

Fly to Timber and land north of the city, where you'll find a body of water called Obel Lake. You'll know you're nearby if you check the menu and it lists your location as "Obel Lake". Head out onto a rounded peninsula and mash the [TALK/CONFIRM] button as you wander the perimeter and you should get an option to Throw a rock or Try humming. Hum as many times as you can and a "black shadow" should surface from the water and eventually comment. After it leaves, run around the edge of the water again mashing [TALK/CONFIRM] until you get the chance to hum again. Do so and this time the creature in the lack will ask you for a favor. Pick What is it and you'll be asked to find the lake creature's friend, Mr. Monkey.

Yes, this is happening.

Fly north to Dollet, then venture west a bit to find a forest. Head into the forest to find a monkey, and when you do pick the option Throw a rock. Seems kind of rude, and naturally the monkey will respond by chastising you. Fair enough. Head deeper into the forest to encounter the monkey again, and this time pick the option Sing to get the same response. Well I never! 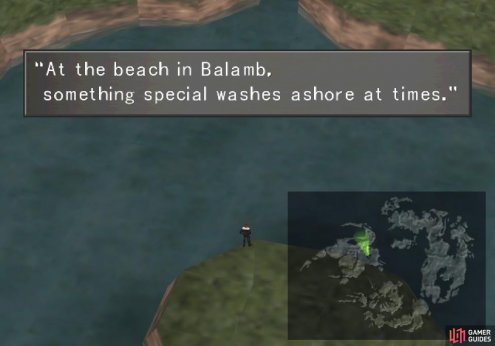 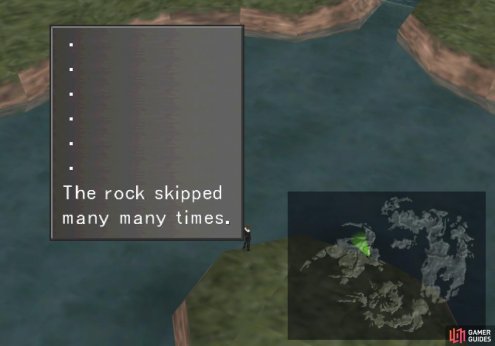 "You'll find something on an island east of Timber, too."

"At the beach in Balamb, something special washes ashore at times."

"There's also something on top of a mountain with a lake and cavern."

"Take some time off at Eldbeak Peninsula. I bet it's a wonderful place."

Damn thing sounds like a cheap travel agent. Anyways, sometimes it'll repeat itself, or give you irrelevant information, but keep at it and you'll get all the clues. Clues to what? Who knows! In any event, once that's done, interact with the edge of the lake once more and this time pick the option to Throw a rock. Repeat this until you get a message that the rock skipped many many times." 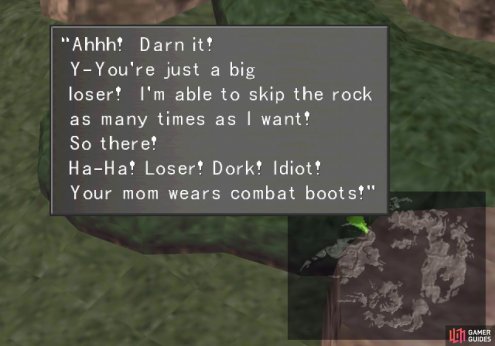 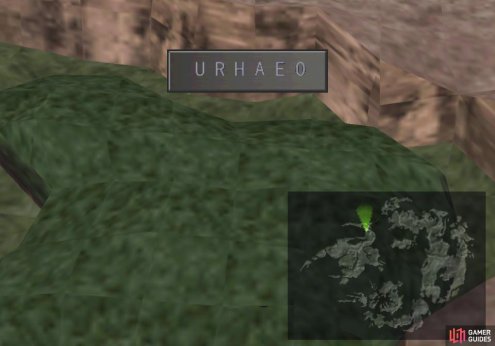 Return to the forest west of Dollet and throw some more rocks at the monkey until he returns fire with a rock that has a clue on it: U R H A E O. Okay. Now it's time to go look for these locations the lake creature mentioned to acquire similar clues:

Return to Obel Lake and search for the mysterious creature again, hum to draw it out, and talk to it until Squall shows off all the rocks (this could take a few tries). It should list the codes in the following order:

When read from right to left, top to bottom, you get the following:

"Mordred Plains has treasure", eh? We'll see about that.

Fly to Esthar city, turn north, then fly over the mountains to land. Behold, the Mordred Plains! This part can be annoying, as you'll have to run around and mash [TALK/CONFIRM] until you find some rocks - you won't see them on the map, so it's just blind searching. When you do find them, however, note what the different colors say: Blue rocks establish the ground rules and generally tells the truth: it does, in fact, not know where the treasure it, some rocks are liars and all actually repeat the same things. The black rock says nothing but "...The treasure is probably in the direction of the North Star.", which is useless. The white rock just gives you random directions, while the red rock actively lies - the opposite is true.

How rocks can be angry is anyone's guess, but when you find a red rock, keep searching it to find all the directions it gives (usually two) and search in the opposite direction. For example, if you find a red rock, talk to it repeatedly and say it tells you (angrily of course) that the treasure is north and west - you want to search southeast. You'll need to adjust your directions repeatedly, and the search area for the actual treasure is rather small, so don't lose hope - you'll know you're getting close when the red rocks start telling you the opposite directions at fairly close intervals.

Finally you should discover a red rock that tells you (again, angrily) that "The treasure's not here!" Search the same area again to score a Three Stars. Stupid rocks.

You're not quite done yet, as one more treasure awaits you. Fly to Trabia Garden, and from there turn west to reach the western-most edge of the landmass Trabia is on. On the southwestern coast is a peninsula - Eldbeak Peninsula, according to your map. Search the southwestern tip of this peninsula for yet another clue: TRETIMEASUREATMINOFFDEISLE

This is somewhat obscure, but if you remember the lake creature's words "Take some time off at Eldbeak Peninsula. I bet it's a wonderful place.", it outright gave you the solution. Remove the words "TIME" and "OFF" and you'll be left with: TREASUREATMINDEISLE

Fly down to Esthar and from there head southwest to find a small, non-descript island off the coast. Land on it and make sure it says you're on "Minde Island", then search around the southeastern edge of the island to find a Luck-J Scroll.

Well, that was an ordeal, and you got a few treasures out of it, at least.