The Queen of Cards questline is easily the most complicated quest in the game, running through most of the game’s duration. You’ll be able to start it after your SeeD exam, during your visit to Balamb City en route to Timber. To make this quest easier, you should endeavor to gain an understanding how how Triple Triad works, especially when it comes to spreading and abolishing rules - this quest will be much more difficult if you spread rules like Random or Same/Plus, and you can delay its progression somewhat if you allow the Queen of Cards to travel to distant lands before you yourself can reach them. Much save/loading is involved, and you’ll have to acquire rare cards from various sources to satisfy the Queen of Card’s demand for new cards.

The Queen of Cards can be found in several cities throughout the world, typically - but not always - in hotels, pubs or other public places. While she herself has no rare cards (her cards aren’t even particularly strong, in fact), if you lose specific rare cards to her she’ll give them to her artist after, who will - in a fit of inspiration - create new cards. After this new card is created it’ll be distributed to a specific character somewhere on the world, waiting for you to win it. Your old card will end up in the deck of the Queen of Card’s son, who resides with her father in his house/studio in Dollet.

Before we get to discussing the cards you’ll need to win, then lose, then win back again, and the new card created by this process (which you’ll also have to win), a quick note on the Queen of Card’s wandering ways is in order. After losing or winning a rare card from the Queen of Cards she’ll grow weary of the current region she’s in and move to a new location. Where she’ll move to is dependant upon her current location, and while there are typically multiple locations she can travel to, the odds for each one aren’t equal. To make things easier on yourself, after you win or lose a rare card, make sure she goes to Dollet (if she’s in Balamb) or Balamb (if she’s in Dollet). Keeping her bouncing between Balamb and Dollet should make it easier to complete this quest, since her son will be easilly accessible and she shouldn’t pick up too many foreign rules. This will be immeasurably easier if you abolish Random and spread Open in Dollet.

In any event, here are the locations she can travel to:

With that out of the way, let’s talk about the cards you’ll need to get from other players, then lose to the Queen of Cards, and the new cards created by this process and where to find them. A list immediately follows, and after that you’ll find each such transaction detailed further below: 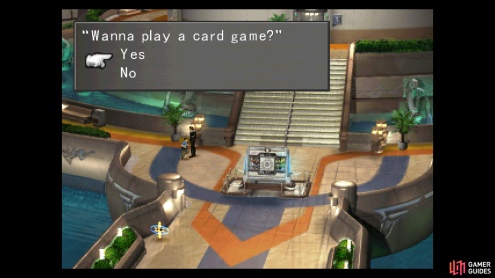 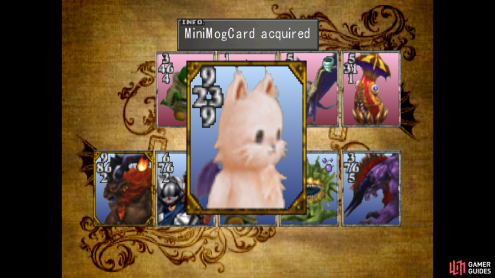 The first card the Queen of Cards seeks is the MiniMog Card, which can be found in Balamb Garden. Before you try for it, you should make sure your deck is built up somewhat - completing the field exam and acquiring the Ifrit Card is a good start. When you’re ready, enter the 1st Floor Lobby (the screen with the save point) and wait for a kid with a blue shirt to run through. If he doesn’t show, or if you miss him, leave the screen and return and she should respawn. Challenge him to a game of cards and win the MiniMog Card.

After the operation in Dollet, head to Balamb and find the Queen of Cards standing outside the train station. Challenge her to a game of cards and make a dummy deck with four junk cards and MiniMog, purposefully lose the game, and the Queen of Cards should take MiniMog if it’s the only rare card in your hand. Afterwards, make sure she says she’s going to Dollet. 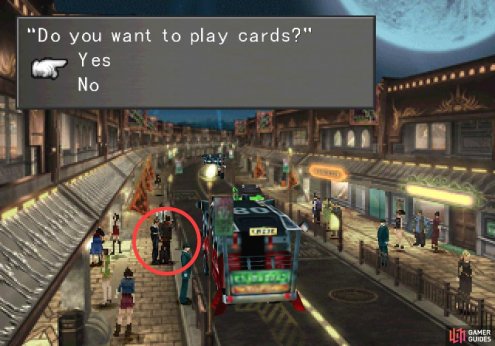 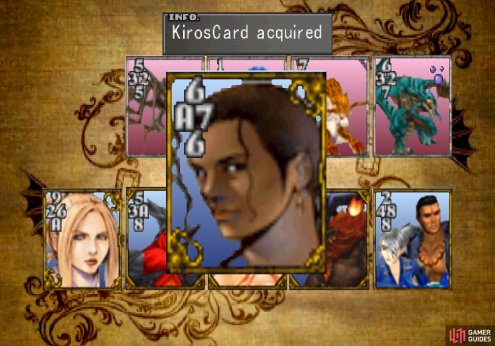 After the events at Galbadia Garden, head to Deling City, go to the Galbadia Hotel and from there exit to the left to reach another street. Run down (you’ll be on the left side of the road) and look for a man in black standing next to the road, just above where the bus stops. Challenge him to a game of cards and play him until he plays his Kiros card, which you should endeavor to deprive him of.

This one is somewhat simpler than the last, but there’s still a good bit of time between losing one card and winning the next. The next card the Queen of Cards needs is the Sacred Card, which you can obtain if you defeat Minotaur and Sacred in the Tomb of the Forgotten King. You’ll be sent here automatically during the story, shortly after arriving in Deling City, although Sacred and Minotaur are optional bosses.

Once you have the card, lose it to the Queen of Cards, send her back to Balamb, then win the Sacred Card back from her son. It’ll be a good long while before the next phase of this quest.

After Balamb Garden reaches (read: crashes into) Fisherman’s Horizon in disc 2 you’ll be able to continue this quest. Play the mayor’s wife, Flo, and win the Irvine Card from her.

After the events at Fisherman’s Horizon you’ll be in control of Balamb Garden. To continue this quest, you’ll need to finish the Chocobo Forest quest (in itself a rather involved quest with a lot of travel) to obtain the Chicobo Card. Once done, lose the Chicobo Card to the Queen of Cards, send her back to Dollet, then win the Chicobo Card back from her son.

For a change of pace, you can win the card inspired by your Chicobo Card immediately. Head to Balamb Garden and find a student sitting on a bench outside of the library. If he doesn’t appear, exit the screen and return until he spawns. When you find him, win the Chubby Chocobo Card from him.

You won’t be able to advance this quest again until disc 3. When you reach the Lunar Base, win the Alexander Card from Piet. If you don’t win this card from him on the Lunar Base, you’ll have to track Piet down after you acquire the Ragnarok. To do this, fly to Esthar, more specifically, Tear’s Point, but don’t get too close, as the monolithic Lunatic Pandora now hovers over the site. From here, fly south over Esthar’s fence to find an isolated peninsula. Land and proceed on foot to the south, then to the west to reach the end of the peninsula, where you can find the landing site of Piet’s escape pod. It’s not marked on the map, so you’ll just have to wander around blindly until you run into it (see image provided). Here you should find Piet sitting on the ground, and he’ll still play cards with you - with the Lunar Base’s rules - if you challenge him.

After losing Alexander and ensuring the Queen of Cards goes to Balamb, find her son in the painter’s shop and win back your Alexander Card from him, then leave Balamb/Dollet and fly to Timber, of all places. The new card that the Queen of Card’s father was inspired to make after you lost Alexander can be found here.

Enter Timber and head to the pub, where you’ll want to challenge the man in the upper right corner of the pub. Play him and win his Doomtrain Card, although be wary, as he won’t play this card often - it may easily take over a dozen games before you even see it.

As soon as you win Doomtrain, it’s time to lose it again. Return to Balamb/Dollet and lose Doomtrain to her. Aagain, make sure she goes back to Balamb/Dollet, then follow her there and talk to her in the pub to find out that her father created the Phoenix Card after being inspired by Doomtrain, which now is held by an official in Esthar.

First things first, let’s win back Doomtrain from the Queen of Card’s brat, and rejoice! You don’t have to waste time playing him ever again!

Leave Dollet and fly to Esthar, enter the city and make your way to the Presidential Palace. Once inside, enter the first doorway you come across to return to the room where you were first brought after entering Esthar. Here you’ll find a Presidential Aide, whom you can play cards with. Win the Phoenix Card from the aide.