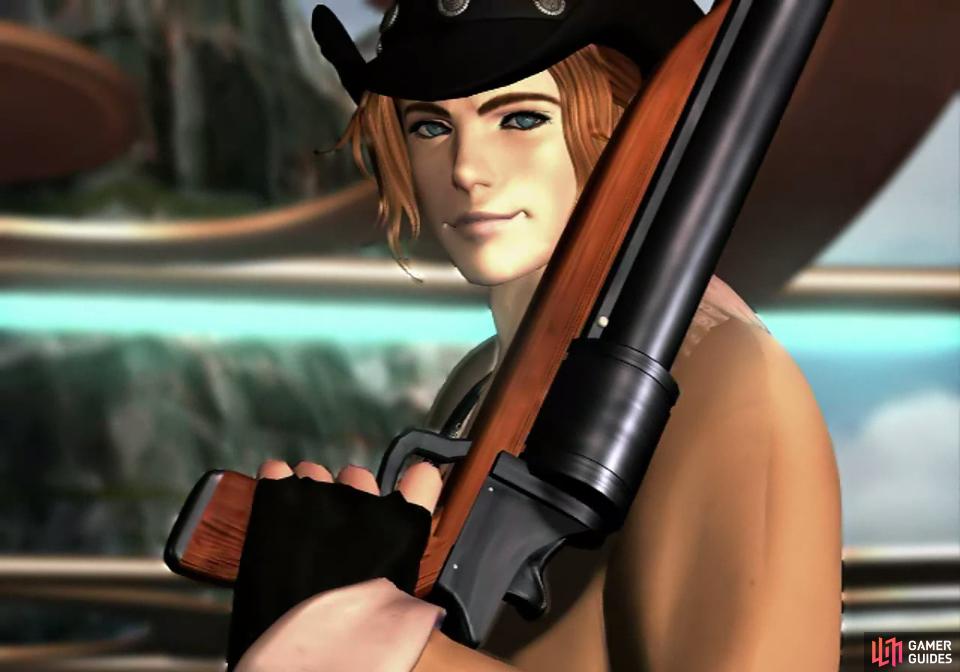 Considering himself a smooth-talking ladies man, Irvine tries to project an aura of cool detachment. This facade tends to crack under pressure, but cut the guy a break - it can’t be easy being a sniper who uses shotguns. Irvine is the only SeeD in your party who hasn’t served time at Balamb Garden, and for some reason dresses like a cowboy.

When Shot is activated, Irvine will get a random amount of time to blast the enemy with a barrage of bullets. The time he’s allotted is roughly 8 - 26 seconds; determined in part, as usual, by several factors including how many HP he has left (as a percentage of his max HP), how many allies are KO’d, and if he’s afflicted by status effects.

Time isn’t the only factor to consider, however, as Irvine can choose between a variety of ammo to use during his Shot limit, which has different effects. The ammo chosen and its effects are listed below:

Keep in mind some other limitations to Shot: if a particular Shot attack requires you to target a specific foe and that foes dies during the Shot, subsequent attacks will deal zero damage. Also, if you run out of ammo during your Shot attack, the attack will end prematurely.

For much of the game, Flame Shot, Canister Shot and Armor Shot will all serve you well, as this ammo is power, deals hefty damage, and easy to create. Towards the end of the game, however, focus should shift to Quick Shot, as its single-target damage output is simply phenomenal, allowing Irvine to compete with even Squall in Zell. The only limitation, of course, is running out of ammo, and considering it’s not remotely difficult to pop off 30+ rounds of Fast Ammo in a single limit break, it’s not terribly unlikely. That said, since Fast Ammo can be refined from Normal Ammo (1:1 rate) Shotgun Ammo (2:1 rate), and both Normal Ammo and Shotgun Ammo can be purchased from most general stores, and an infinite supply of Gil is always at your fingertips once you have the Tonberry GF, it shouldn’t be hard to keep your stock of Fast Ammo full… between fights, anyways.

In any event, here’s a list of the types of ammo Irvine can use and where to get it, so you can ensure you always stay stocked up.

Irvine’s a sharpshooter, but lets be honest - sniping foes from a distance is like, a lot of work, and if Irvine ever successfully pulled off a shot from a great distance than thirty feet, one might start wondering why he doesn’t just take out every foe that way, and that would bring into question the whole "random encounter", "line up and slug each other until one side dies" combat system. So Irvine mostly uses shotguns, deriving absolutely no tangible benefit from his use of ranged weapons. Suitably, then, his weapons aren’t any stronger than most other weapon types. He’s got the standard four weapons, with an ultimate weapon that caps out at +25 Strength. On the plus side, his ultimate weapon’s 115 Hit% is somewhat higher than the norm.

How to Obtain Exeter: Irvine, like Rinoa, has an ultimate weapon that requires some rare components, and all things considered it might not be worth going out of your way to acquire them when his second-best weapon, the Bismarck, is pretty good in its own right.

The two Dino Bones can be acquired easily enough from T-Rexaurs, either as drops or, more reliably, when mugged. You can also refine 1x Armadodo Card or 2x T-Rexaur Cards for this purpose. Screws are common enough that it shouldn’t bear much description - defeat some Geezards near Dollet or refine 1x Geezard Card for 5x Screws. Star Fragments can be dropped by a variety of foes (Anacondaur, Chimera, Hexadragon, Iron Giant, Ruby Dragon, T-Rexaur, Tri-Face), but the easiest way to get them early is to refine 3x Iron Giant Cards via Card Mod. The Moon Stone is the real troublesome component, as it can only be acquired by defeating or mugging Elnoyles, defeating high level Imps or mid-to-high level Toramas. None of these foes can be fought until disc 3, so unless you have Chocobo World, you’re probably going to have to wait for this marginal increase to Irvine’s stats. Shame.