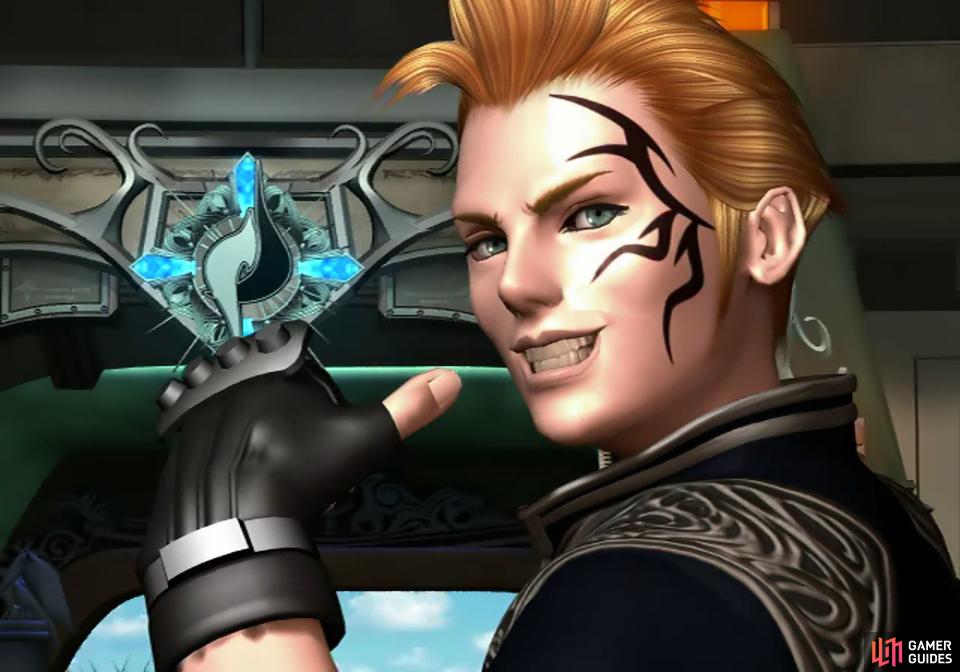 A brash, energetic loudmouth who has trouble keeping his emotions under control. Probably because, you know, he’s a seventeen year old boy. Has a bad knack for blurting sensitive information out at inopportune times and is easily provoked by juvenile insults, particularly by being called "chicken-wuss". He also likes hot dogs, which are apparently some sort of delicacy in Balamb Garden.

Zell’s limit break, Duel, allows him to attack with a variety of maneuvers, which are performed by entering a specific button combination. The duration of Zell’s Duel is timed (the time varies depending on a variety of factors, including having a lower percentage of your max HP, having allies KO’d, and being afflicted by negative status effects), but the timer stops during each maneuver’s attack animation. Since none of Zell’s maneuvers break the damage limit, you can maximize your damage by simply spamming simple moves like Punch Rush, Booya and Heel Drop.

Despite this, Zell can also learn new moves by reading issues of Combat King which can be found during your travels. You’ll never really want to use them in combat, and any you miss can be purchased at a store near the end of the game (two of the magazines can’t be found until after you have access to the store, at that!), but for the sake of completionism their locations are as follows:

…or failing all that you can just buy all the issues of Combat King for 750G (save for Combat King 005, which costs 22,500) from the Esthar Book Store. No reason you shouldn’t be able to get infinite money by this point, anyways, and it saves you quite a bit of bother.

In any event, now that you know where to get all of Zell’s limit maneuvers, here’s a list of them all and their effects:

Matching his straight-forward personality, Zell… well, Zell just likes to hit things. Despite doing a mix of different strikes during his limit breaks, his weapons - if you can call them that - are limited to gloves. Zell has the weakest ultimate weapon in the game, having the standard base Strength of 25, but with a lousy 103 Hit%.

How to Obtain Ehrgeiz: The earliest Adamantine can be practically obtained is by refining the Minotaur Card into 10x Adamantine, which you can earn in the Tomb of the Forgotten King. You can refine 4x Blue Dragon Cards into the Fury Fragment you need, leaving only the Dragon Skin. Sadly, this is something of a chore to obtain, at least if you’re low level. It’s rarely dropped by low level Grendels, but commonly dropped (and in great quantities!) but high level Anacondaurs, which can be found throughout the forests near Timber. Given its scarcity at lower levels, low level parties should just wait until they obtain the Tonberry GF so they can use the LV Up command. Higher-level parties (30+) should have little trouble acquiring this component whenever they please.