This Mongol Territory can be found by heading directly south from Kuta River Bridge. Aside from the bonus objective, which is random, your goal for the Logging Camp is to retrieve four Sashimono Banners (they will be marked), eliminate the war camp general, and free three prisoners. This is likely the first instance in the game where you encounter Mongols with helmets on them. Since the Half Bow can’t hit through helmets, you will need a different approach, especially if you haven’t progressed enough to acquire the Longbow. 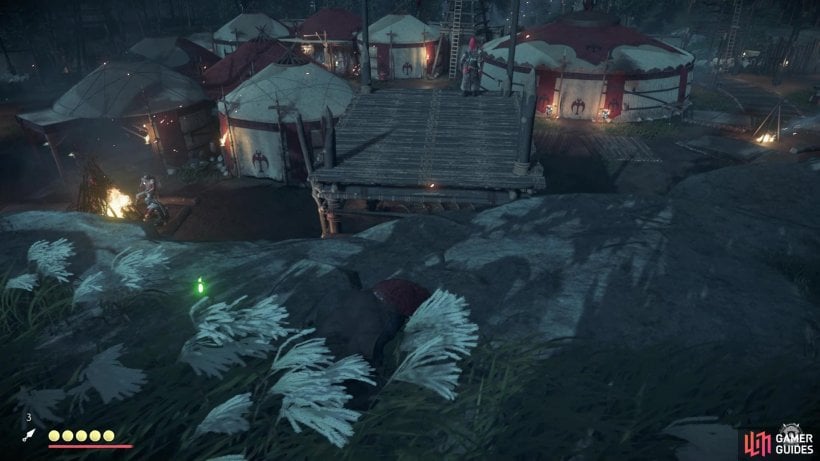 It should be pointed out that this is a pretty large camp, so there’s going to be a lot of enemies. You’re almost exclusively dealing with red-tier enemies here, too, so a frontal assault might be dangerous if you haven’t experienced them much. The first thing you should always do is look out for the archers on the raised platforms, noting some of them might have helmets, so you will need to improvise and either try to sneak up to their platform or possibly use fire arrows on them. Thankfully, not every enemy will be wearing a helmet, so you can pick off the ones who aren’t with headshots.

The prisoners are kept in cages that are locked, and it takes a few seconds to unlock them. So, you will definitely want to make sure no enemies are around, if you’re being all sneaky, when you go to free them and it doesn’t matter if enemies are still alive or not when you do. As before, the Sashimono Banners are highlighted for you and if you need extra help, their outlines are marked whenever you use Focused Hearing. The war camp general here in Logging Camp is a shield-user, so make sure you have Water Stance equipped to easily break his guard and bring him down. Don’t forget to go inside of the general’s tent to get a Mongol Artifact and Record. Once you complete all of the objectives, find the black powder cache, set it on fire and watch the camp burn to the ground.