Well, Lord Shimura wasn’t all too pleased with Jin’s actions when retaking Castle Shimura, so he starts out this mission being held captive. Thankfully, someone comes to help you out of your imprisonment, so step out of the room and climb out of the broken window. Find the building next to the one you were currently in, which will have a ladder on the side of it. Climb the ladder and head to the opposite end of the roof, dropping down on that end. There should be a smaller building straight ahead of you, so head to it and crawl underneath it. Stick to the outer perimeter of the place and climb the crates to the next section. 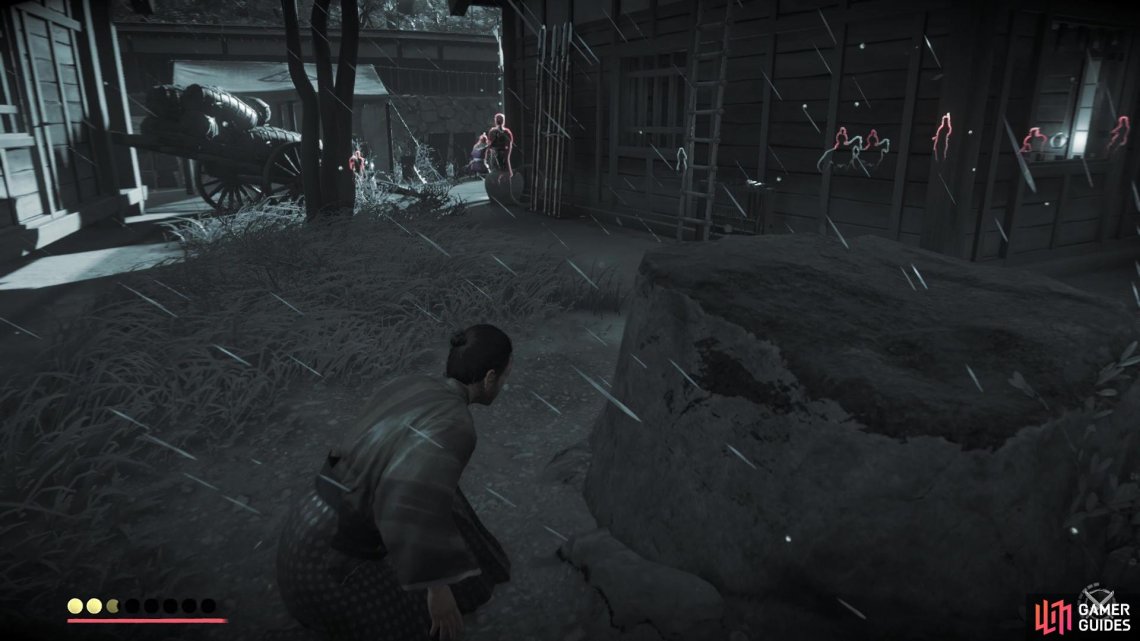 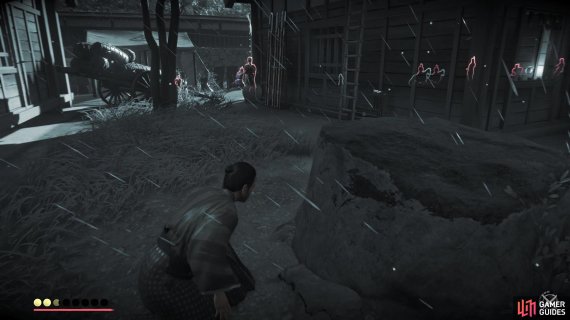 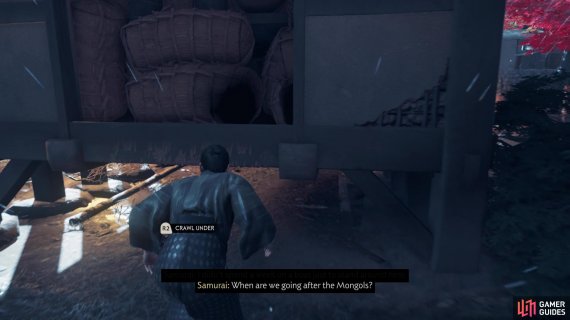 Climb the ladder on the side of the building here (left), then crawl underneath the this building to remain hidden (right)

There will be a building in front of you with a broken window, so head through this building and out the other side, where you should be a tiny bit away from a hole in the wall. Squeeze through this hole and you will see the stables, with your horse in it, too! Unfortunately, the guards know you’ve escaped now, but you need to keep moving. Jump to the roof of the larger building near you, then drop to the ground and stick to the outer part of the map. Taking note of some guards moving back and forth, look for the stairs that lead to the stables and approach your horse. Watch the scene and you will end up on foot in Kin.

Right now, you’re all alone and defenseless, as you have no weapons or armor at all. For now, move forward and you will eventually reach the site of the sacred tree, but it is overrun by Mongols. Taking note that you have no weapons at all, it’s imperative you don’t get seen, as you will likely die (plus the objective says to not be seen). Getting to the river on the opposite side of where you start, since there are very few Mongols over there. Once you do, head to the backside of the sacred tree and climb up to it, where you won’t find Yuna, who was said to be waiting for you here.

Examine the one body there, then you will need to investigate the area further. There are some more bodies below you to check out and while doing so, the Mongols will find you. You will be moving slowly here, so just push yourself to the bridge until a cutscene starts. Upon regaining control, collect your gear from the nearby chest, then step outside. The stables are nearby and if you look in the middle stall, there is a Sashimono Banner. Head to the one lookout tower to meet up with Yuna, who says she found a better hideout for you. So, climb up and look towers the large tower in the distance. 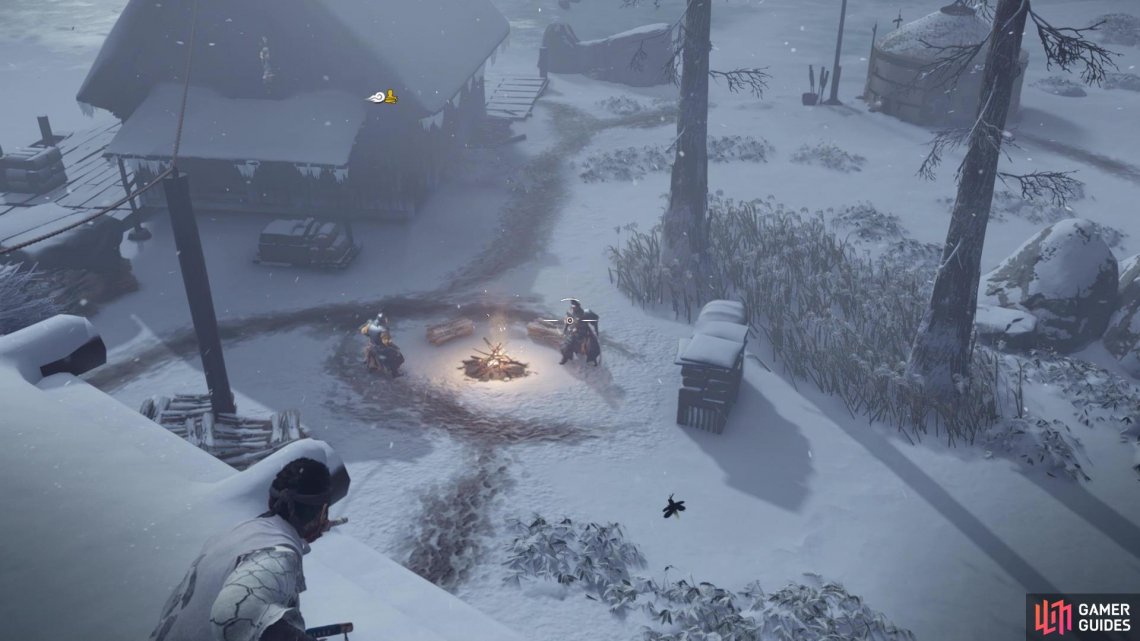 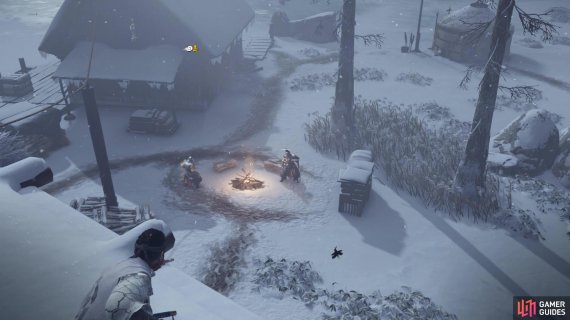 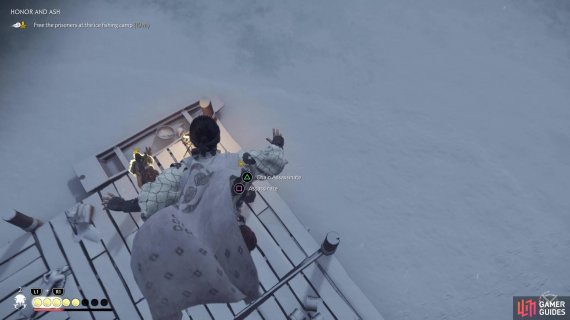 The Blowgun is an effective way to be stealthy (left), Always look for an opportunity for Chain Assassinations (right)

The only problem is that the Mongols currently have control of it, so you will need to clear out the place first. Run over to the stables and get on a horse, then follow Yuna. Eventually, you will abandon the horses for going on foot, where you will survey a small fishing village that is a great spot to observe the temple. Of course, this place also has Mongols, as well as prisoners, so your first job will be to clear out the Mongols from the fishing village. It might be better to approach things silently, so as not to alert the Mongols to try and strike down the prisoners.

Don’t forget you have the Blowgun to help with stealthy combat, which has a chance to make other Mongols flee in terror. Once you clear out the fishing village, rescue the one peasant inside, then head to the rock outside to survey the surrounding area. So, Jin has an idea to use the signal devices in the fishing village to lure the enemies at the temple onto the ice, where you can use the explosives to thin out their numbers. Go ahead and use the signal fireworks to make the Mongols run across the ice. Quickly get back to the rock (or whatever is close enough), then fire at the explosives when the Mongols are near them. Clean up the remaining enemies, then start making your way to the main temple grounds. 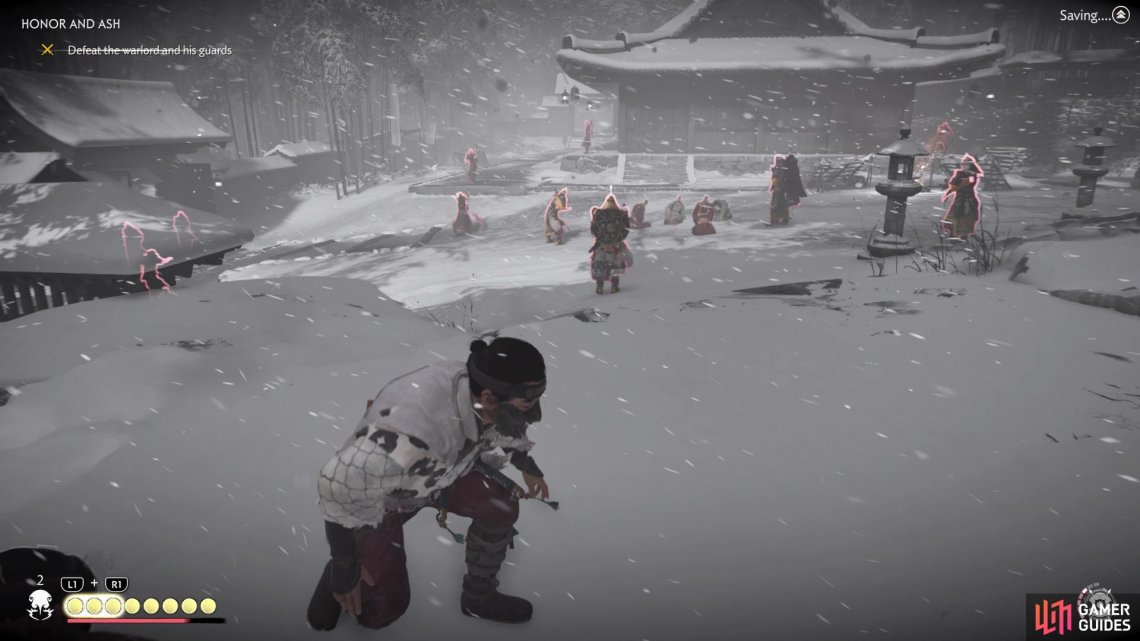 As you approach the temple grounds, you will see that the objective is to find the frozen waterfall. Thankfully, there is a marker on the screen whenever you get close enough, so head there and follow Yuna as she makes her way to the actual grounds. There are a lot of Mongols in the area, which is kind of open, so you will want to make a battle plan before jumping into the fire. It’s going to be extremely difficult to do things silently without alerting the others, plus there’s some prisoners here that you need to worry about the enemies attacking when you’re focused on other things. If you have Ghost Mode ready, you should definitely use it to get an easy three kills. Free the prisoners after taking out all the Mongols, then go to Yuna to finish the mission.