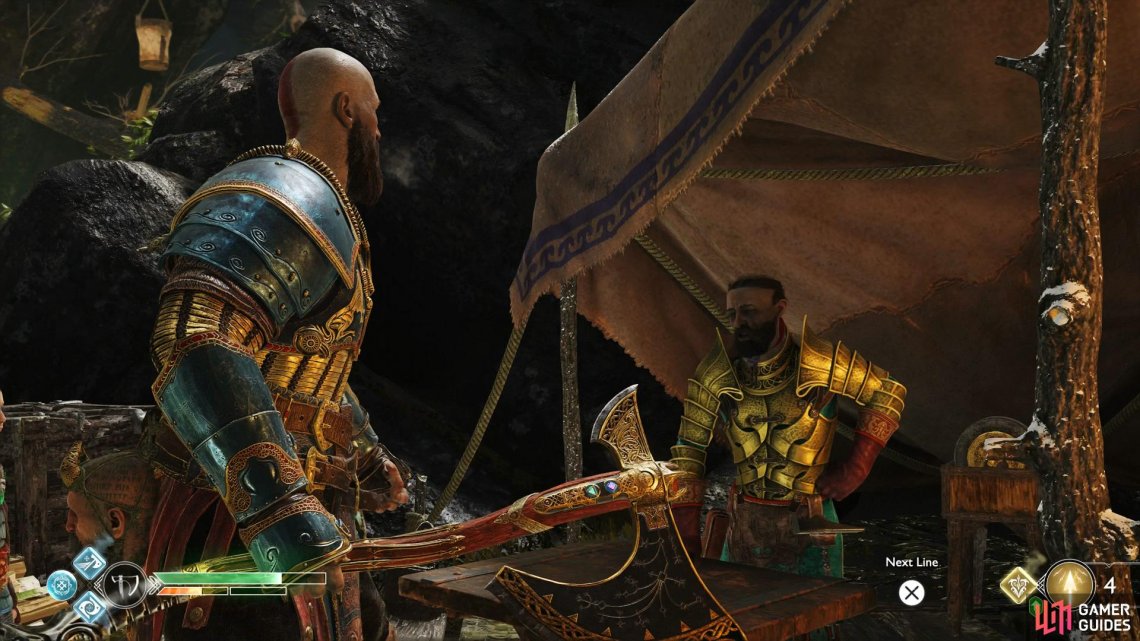 Upon completing the Fafnir’s Hoard Favor given to you by Sindri, you’ll receive this follow up.

To find Northri Stronghold, you’ll need to row the boat to the far northwest of the Lake of Nine, just to the east of the Ruins of the Ancient. Dock the boat and insert the keystone you got from Sindri earlier before jumping back on and rowing further along. Once you enter the cave, you’ll find a dock alongside another shop Sindri has set up for you to use. 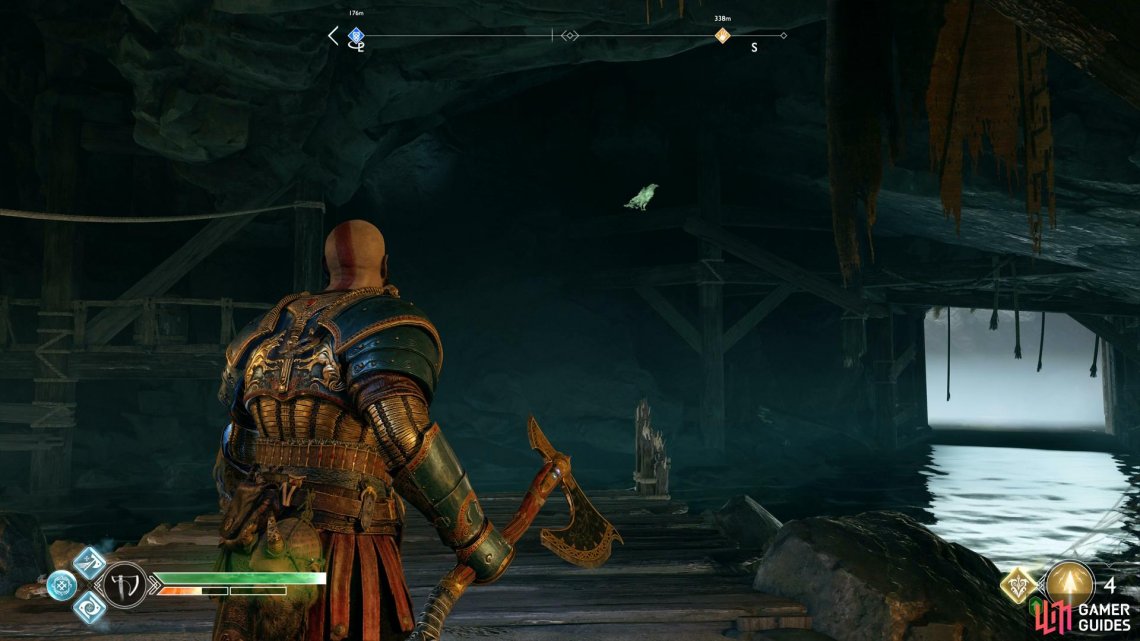 Look behind Sindri’s shop to find the first Raven of the Stronghold.

Be sure to grab the Mystic Gateway and then look above where you docked the boat to find a Raven, the first of two in the Stronghold (this should also be your 30th and award you with a nice 5000 XP). At this fork, you can only row to the northeast as the other way is blocked by a gate.

Find a way to open the gate

Climb out of the boat at the next dock and head forward, turning to the right before you leap over the gap and climbing up the wooden ladder to find the dig spot for the Finder’s Fee Treasure Map containing an Unyielding Cinders, a Rare Enchantment, 10 World Serpent Scales and 10,000 Hacksilver. Drop back down to the bottom now and leap the gap, defeating the group of Shadows and Revenants that await you there. 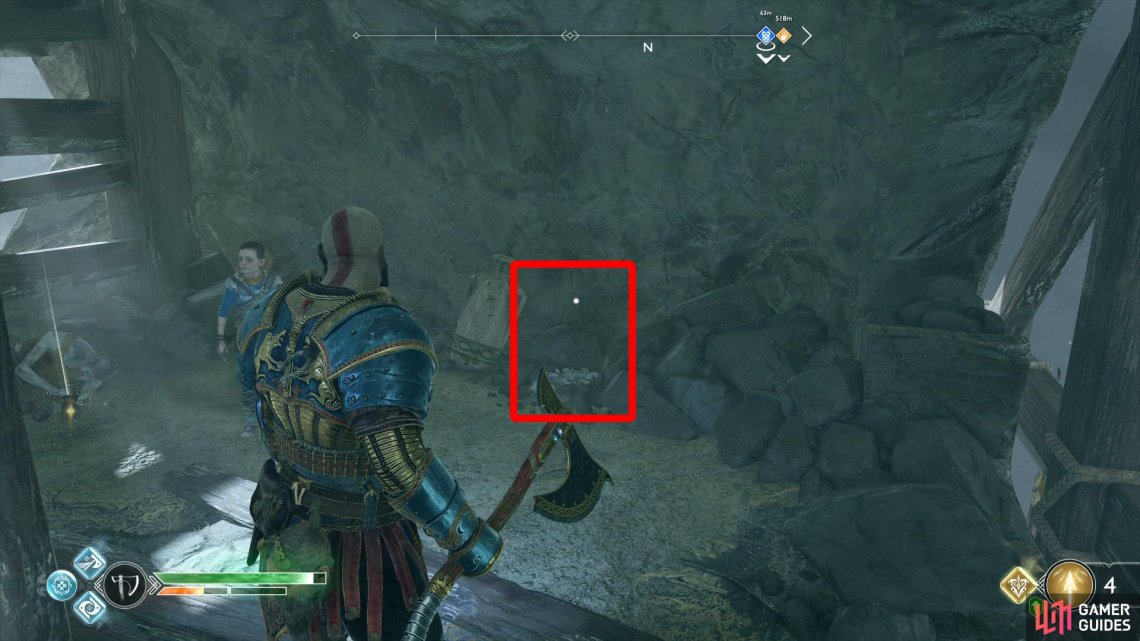 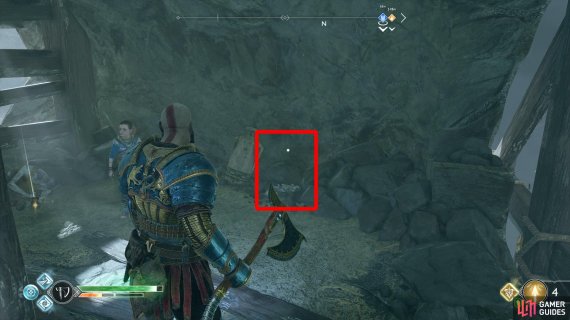 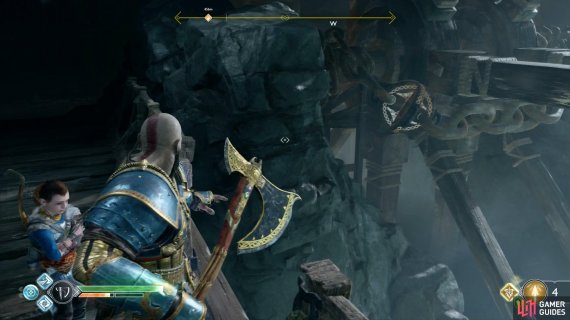 Climb the wooden ladder where you dock the boat to find this treasure at the top (left), stand where the gap in the railings are to find the runic disc holding the waterwheel. (right)

Leap the next gap and walk onto the bridge ahead and stand where the gap in the railing is, turn to face the waterwheel to spot a runic disc you can strike with your axe. This frees the waterwheel and raises the gate. Two Reaver’s however see this as an opportunity to jump you, kill them and then leap across the gap on the bridge. Toss the axe at the Scorn Pole and open the Hacksilver chest before retracing your steps and jumping back on the boat.

Row through the now open gate and dock at the nearby beach where an Ogre awaits. Stun the Ogre in the usual way, Shock Arrows being an excellent way to do it, and then mount it to take out the rest of the Reavers that spawn. Loot the spoils on the ground after and climb the wooden ladder at the back, following the path to a Lore Marker and a Hacksilver chest. 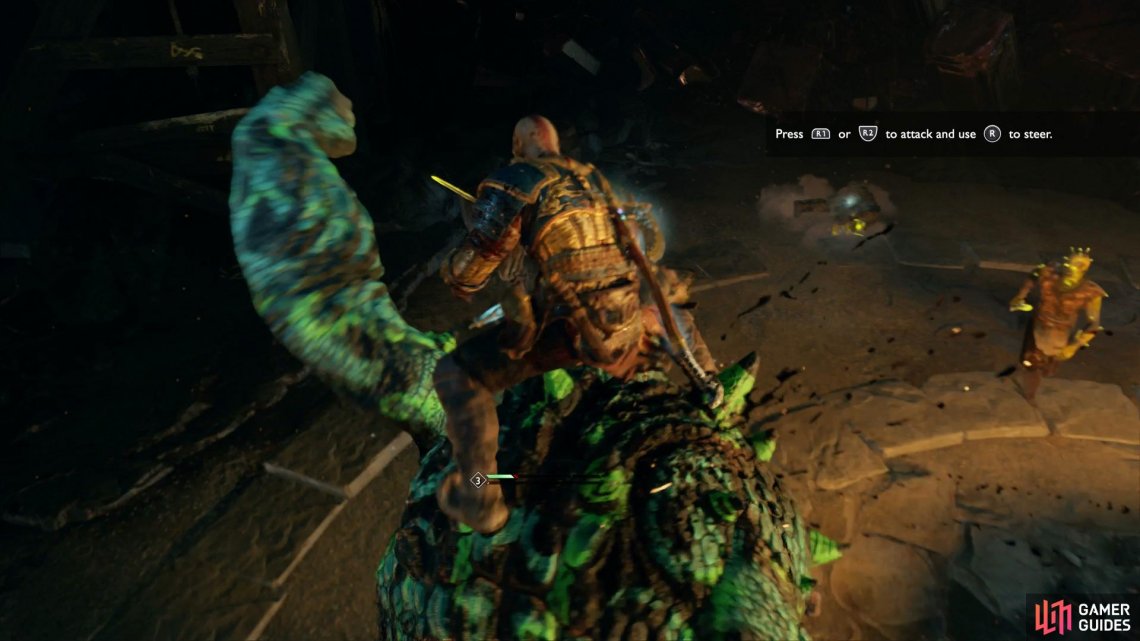 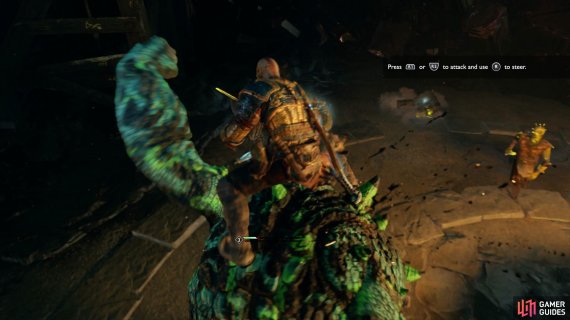 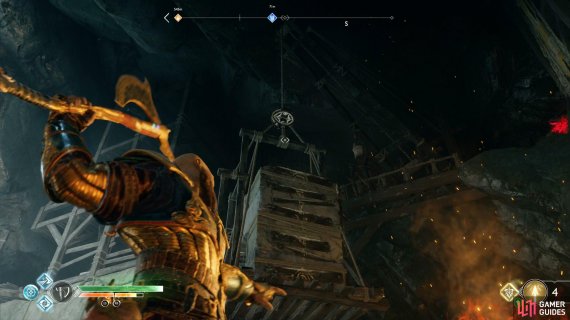 Make use of the mounted Ogre against the other enemies (left), look into the air to spot a runic disc holding suspending the platform in the air. (right)

Drop back down and look up at the suspended platform, there’s a runic disc holding this in place, strike it with the axe to knock it down. Climb up this platform and scale the wall in front of you, turning to the right to shoot a Shatter Crystal. Throw the axe at the Scorn Pole in this new opening and pick up the sack of Hacksilver before dropping down. Follow this path to another Shatter Crystal, shoot it, open the coffin within and climb the nearby ladder back to the bridge.

Head forward and defeat the Nightmares and Poison Wolf that spawns. Don’t head down the slope yet, instead step out onto the north walkway and shimmy across the wall to find another Hacksilver chest. You can now return and take the slope down, leaping over the gap to find a Reaver ship.

Continue along the path until you can go no further and look to the right of the raised bridge to see a spinning board you can strike to lower it and drop down once you cross it. It seems you’ve found the missing son, sharing the same fate as his father. Fortunately for you, the Whetstone is still laying bloodied on the ground. 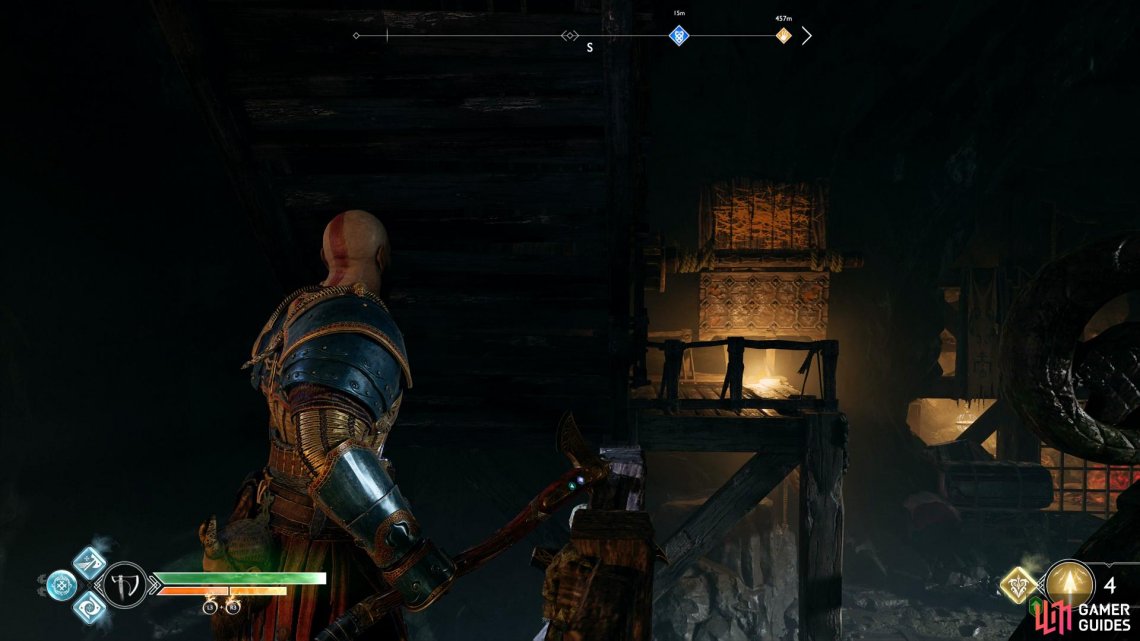 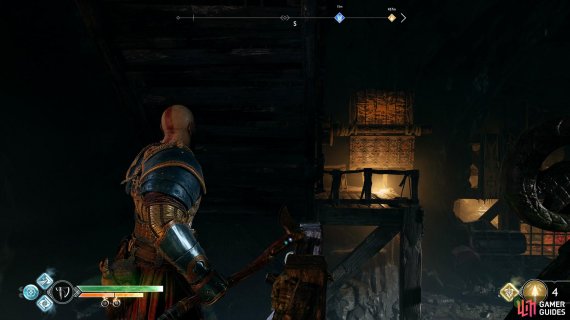 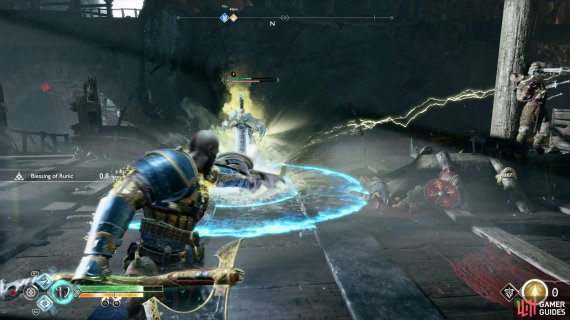 Hit the spinning boards at the back to lower the bridge (left), keep your distance and raise your shield when the Traveller slams his sword into the ground. (right)

Unfortunately for you, his assailant is still about and attacks you, a deadly Traveller. Keep your distance and use Atreus to draw it’s attention, the Traveller is fast and has a large reach. Only make attacks when there is an opening, otherwise concentrate on protecting yourself. Shadows will also spawn on top of the walkway you dropped down earlier, take them out as quickly as possible so you can continue to concentrate on the Traveller. Once he goes down, loot the spoils, receiving the Shattered Gauntlet of the Ages, an epic Talisman with a hidden secret.

Note: The Shattered Gauntlet of the Ages is one of the best Talisman’s in the game but it won’t be effective until you reach the end of your journey. You’ll need to upgrade it to it’s highest level and equip three specific Enchantments to draw out it’s potential. This will be covered in the walkthrough later.

Return to the boat

Look through the gate on the south side and you’ll spot a Shatter Crystal, take aim through the bars and shoot it with a Shock Arrow to remove the sap, allowing Atreus to crawl through the hole and open the gate on the other side. Inside you’ll find a Legendary Chest containing rare resources.

Take the north exit off the boat and follow the path, shooting the Shatter Crystals in the process to remove the obstacles in your way. Reavers and Nightmares attack at the bottom, make use of the limited footing here and knock them into the water to defeat them. Turn to face the Reaver ship and walk forward to the hull, breaking the boards in the process. You’ll find a new Treasure Map along with a Lore Marker and a Hacksilver chest containing a Legendary Enchantment. 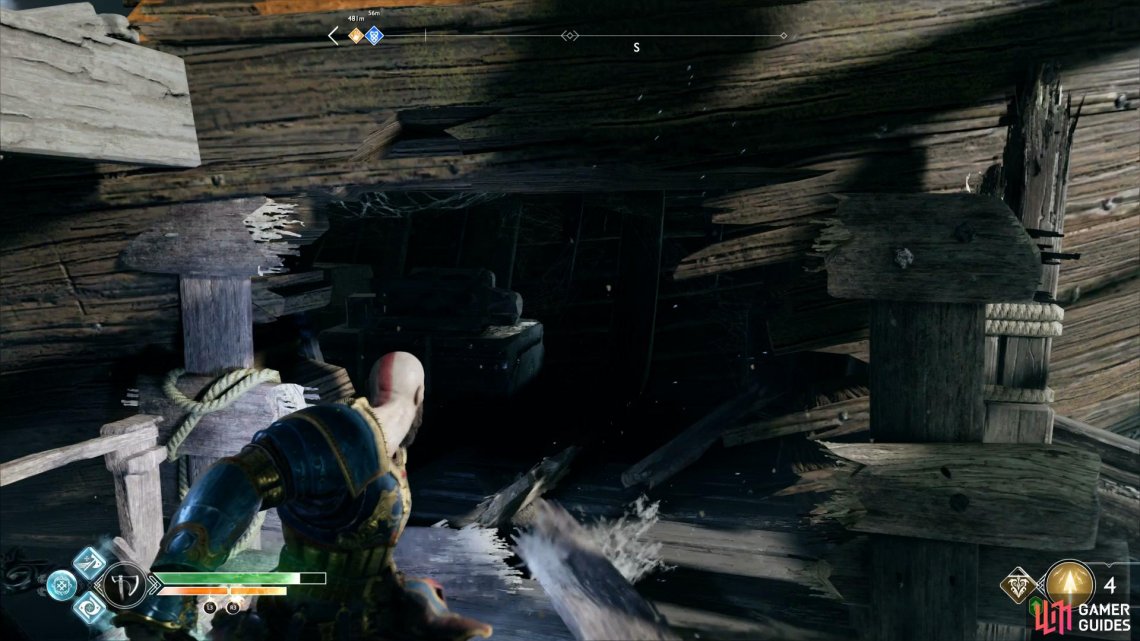 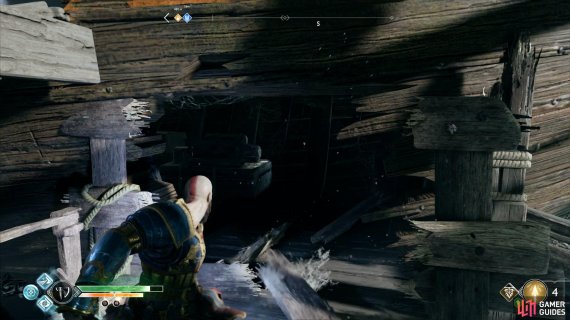 Break into the hull of the Reaver Ship to find hidden secrets (left), this Treasure Map is one of them. (right)

Leave the ship and head back down the path, checking the east wall here for a small tunnel you can crawl under. Strike the Scorn Pole within and pick up the sack of Hacksilver along with a coffin to open. Return again and leap over the gap, picking up the sack of Hacksilver before opening the gate. A Lore Scroll is sitting on the ground, detailing the regret of the son and beginning the Time Heals All Favor, part of the Wayward Spirits quest line. Opening the next gate will lead you back to where you docked the boat earlier, it seems you need to find another way out.

Take the boat through to the south where you destroyed the Shatter Crystal earlier and ignore the first dock as you row further in and dock the boat at the next stop. Climb the ledge to your left and leap over the gap, following the path to a sack of Hacksilver and a coffin behind some boards. Look up at the gate to the northwest here to find the second Raven before you make your way back to where you docked the boat. Raise the gate for a large sack of Hacksilver and then raise the large gate with the nearby chain. 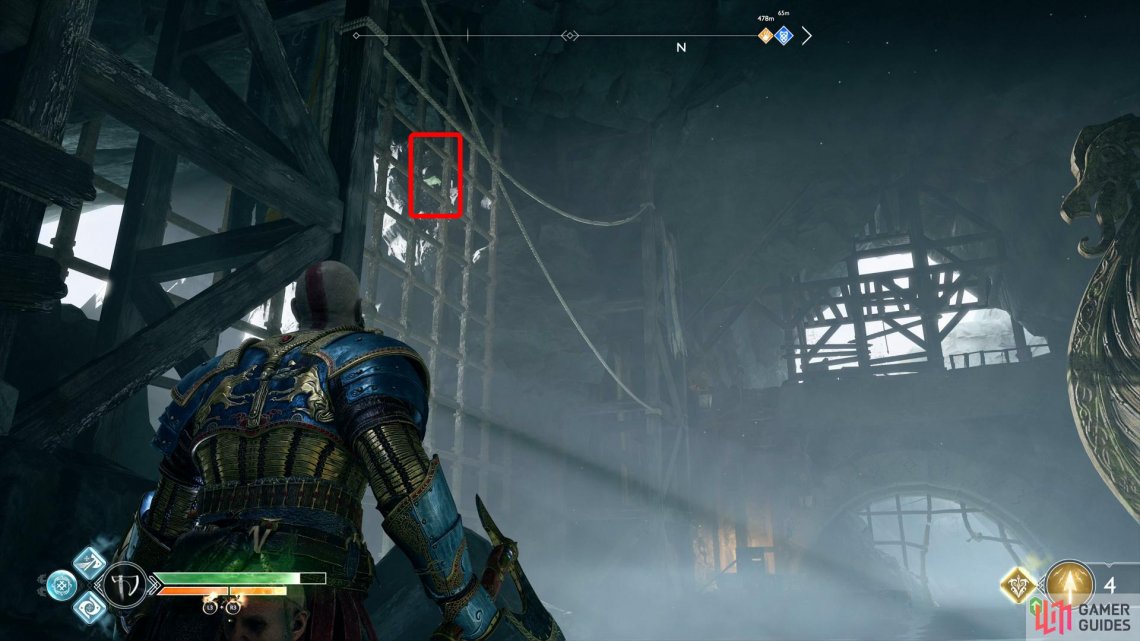 Search the gate opposite the Reaver Ship to find the last Raven here.

Back on the boat, row through this new passage and you’ll come full circle, back at Sindri’s Shop. Deliver the Whetstone to him and you’ll receieve the Hræzla Farmaðr’s Grip along with the XP for completing the Favor.