The Realm of Fire 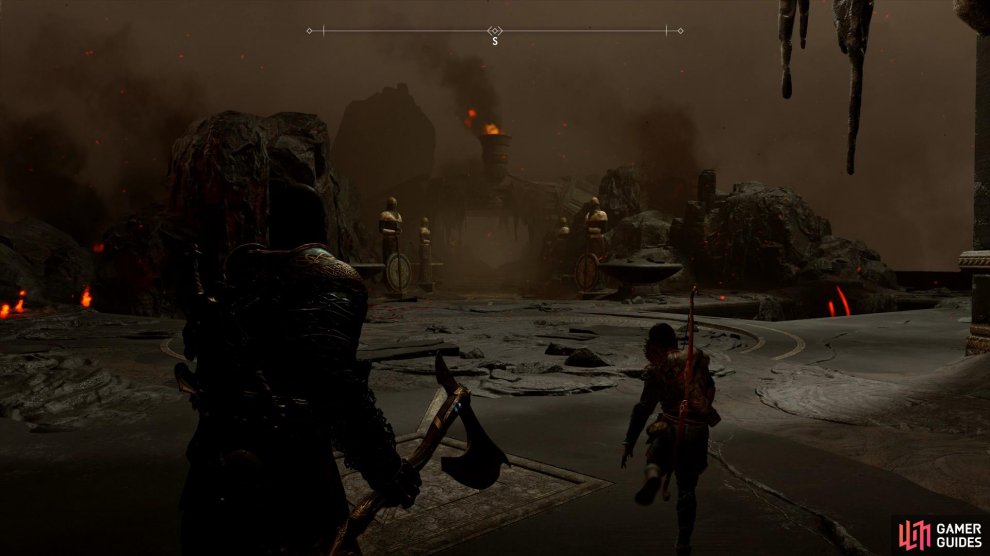 In order to gain access to the optional realm, Muspelheim, you'll need to first complete this Favor. There are Legendary Chests across all the realms that contain one piece of the language cipher needed to translate the language. There are many chests that can contain these but only four are required to complete the disc and grant access, this section here will unlock the realm at the first opportunity. 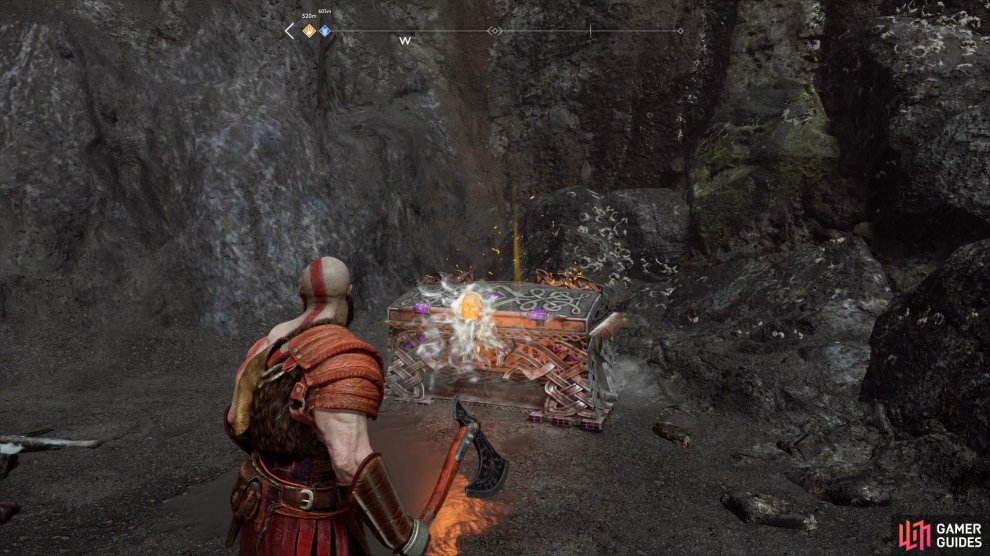 Head to the Forgotten Caverns when the water in the Lake of Nine drops for the first time and climb the chain to the right. At the top here is a Legendary Chest containing the first Cipher. 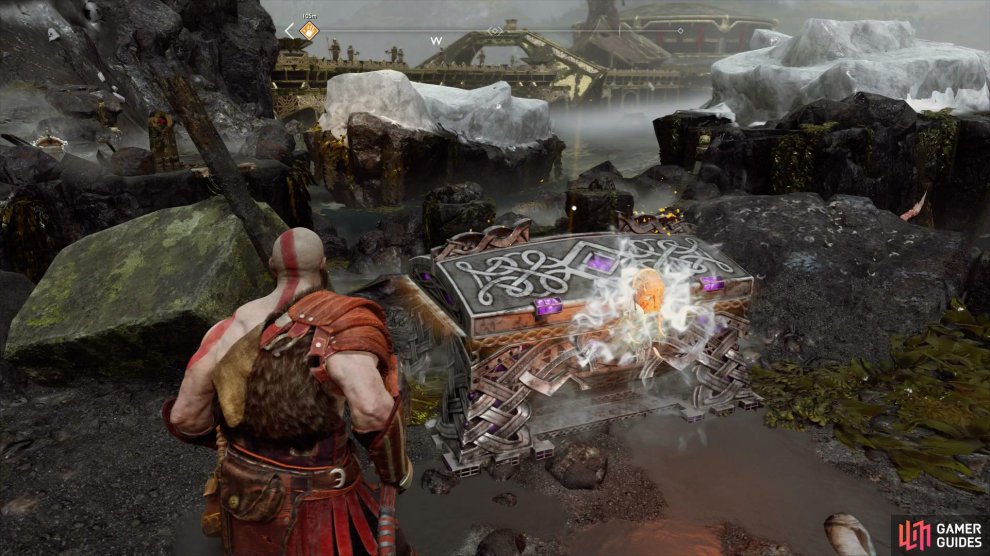 Travel to the Cliffs of Raven, south from the east dock at Týr's Temple and dock the beach. At the far end is a wooden board you can destroy in order to boost Atreus. Once he drops the chain, climb it and look to your left to find the Legendary Chest containing this Cipher piece. 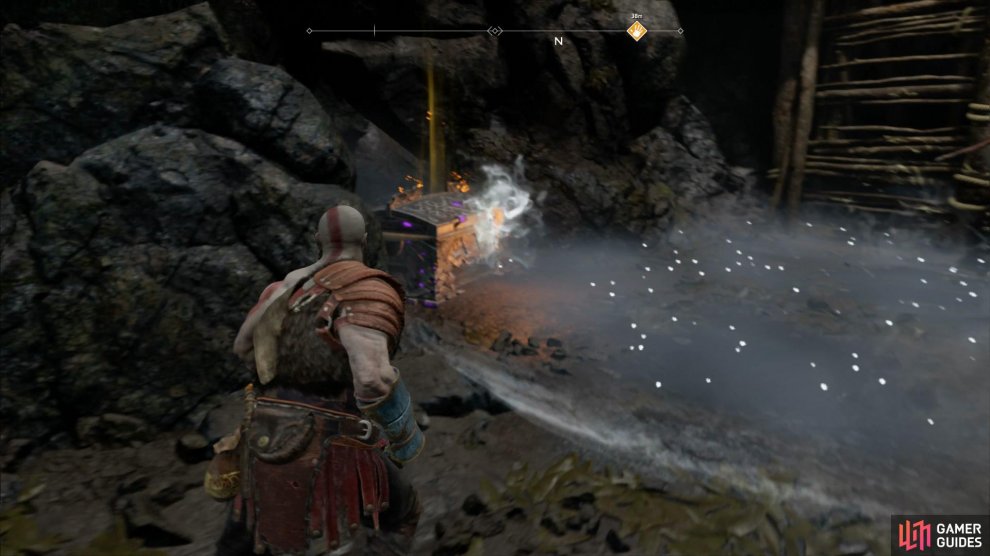 As you travel across Týr's bridge and into the Vanaheim Tower during your journey to the mountain, you'll come across Scorn Poles for the first time. After getting past the first couple, you'll come to a ledge, drop down and you'll be attacked by a Cursed Tatzelwurm once you send the axe into the next Scorn Pole. Once defeated, look to the left of the Scorn Pole to find a Legendary Chest containing this Cipher piece. 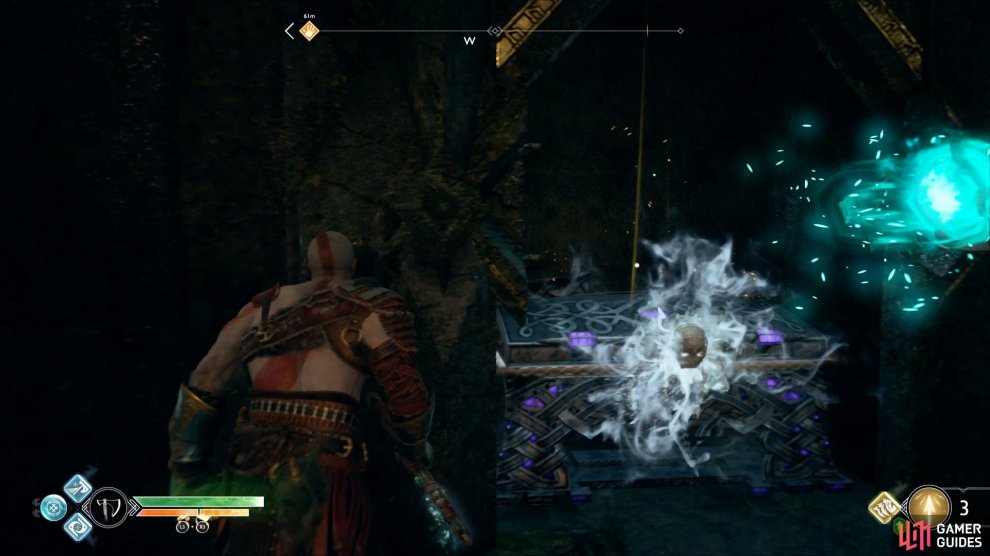 Once you've received the head of Mimir and are traveling back through the Witch's Cave you'll find a sap obstacle to your right. Destroy this and head through to the other room to your right, the Legendary Chest is sitting there containing the final piece of the Cipher.

Use the Realm Table to Travel to Muspelheim

Once you have the language disc in hand, head to the Realm Travel room and lock in Muspelheim. You'll complete the Favor upon entering the area for the first time.

The Realm of Fog 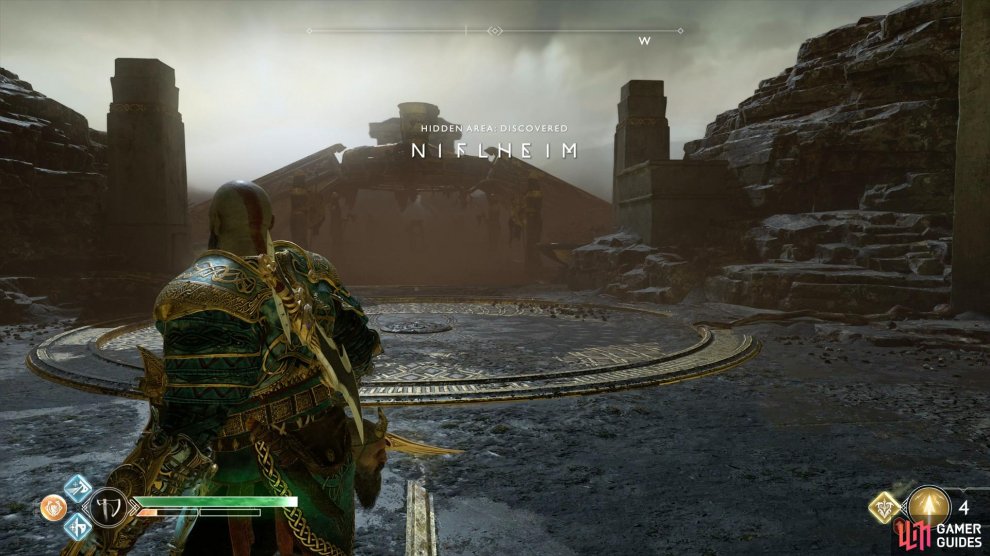 Niflheim is another optional area like Muspelheim full of difficult tasks. In order to gain access to it you'll need a language Cipher disc found by finding four pieces scattered all over the world in Legendary Chests. Although there are more chests than pieces, this section will unlock the realm at the first opportunity. 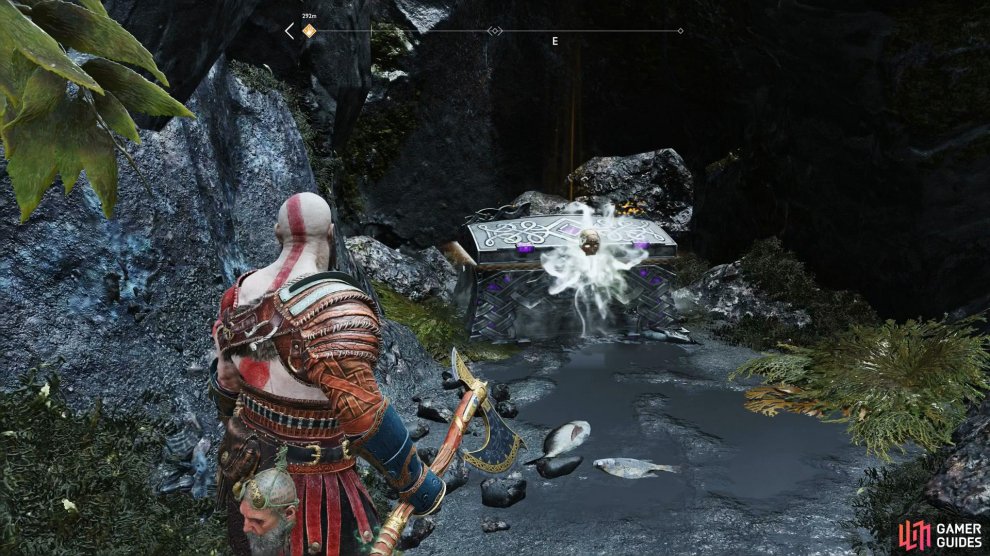 Once the water level has dropped a second time at the Lake of Nine, head toward the oarsman statues (toward the Mason Channel) and dock the boat at the beach to the right of the statues. Climb the ledge and then look over the side to see Shatter Crystals, shoot these with Shock Arrows to remove the debris. Follow this path to the end to find the Legendary Chest containing the first Cipher Piece. 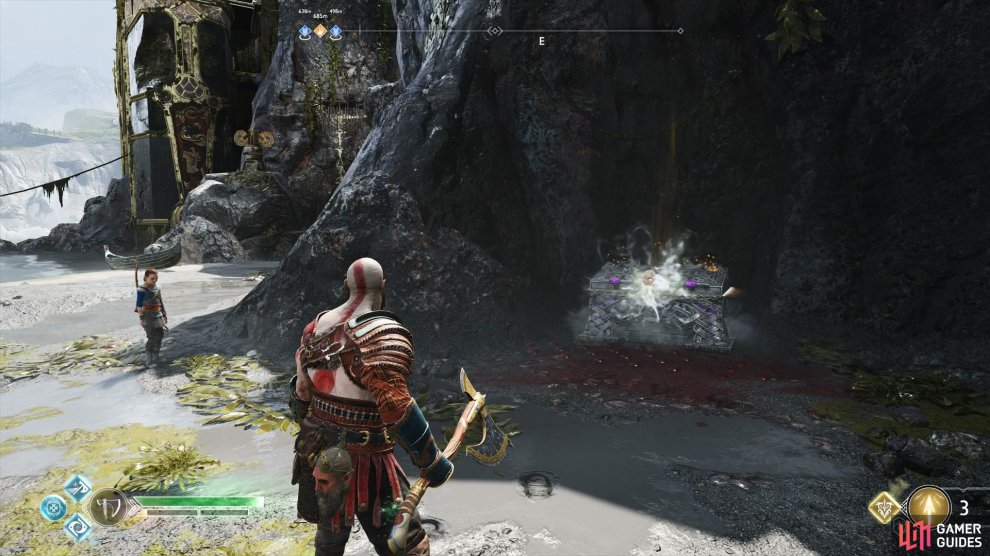 Head back to the Lookout Tower once the water level drops for a second time at the Lake of Nine to access a new beach. Defeat the Nightmares and then hit the Spinner to your left twice to lower the spikes found to the right of the beach. Head to this corner to find a Legendary Chest tucked away containing the second Cipher Piece. 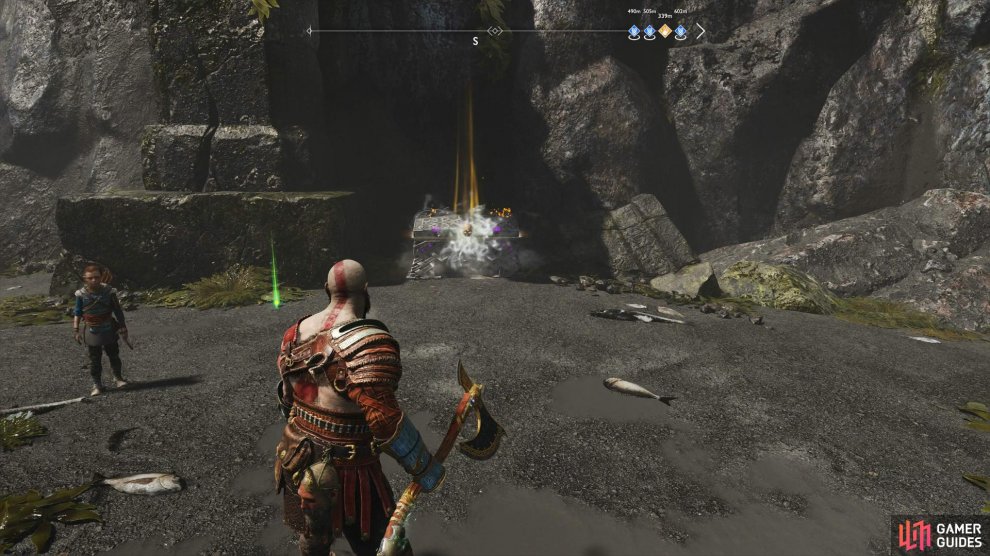 Once the water level has dropped for a second time at the Lake of Nine you'll be able to travel to the Ruins of the Ancient in the northwest. There's a Soul Devourer here however it will only attack if you deal the first strike leaving you free to dash in and open the Legendary Chest for the third Cipher Piece. 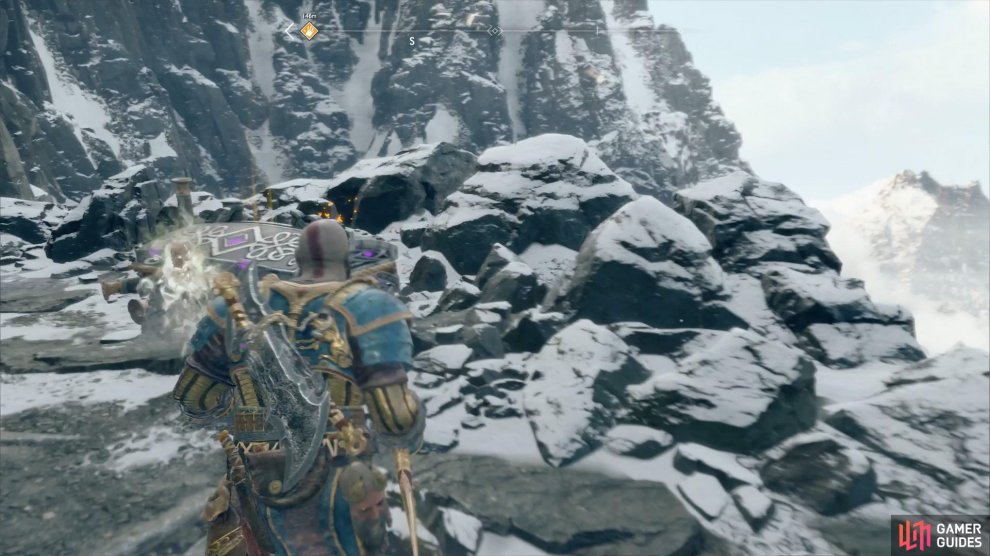 As you reach the summit during the Return to the Summit Journey step, you'll find a Realm Tear with a Legendary Chest sitting behind it containing the final piece.

Use Realm Table to Travel to Niflheim

Once you have the language disc in hand, head to the Realm Travel room and lock in Niflheim. You'll complete the Favor upon entering the area for the first time.