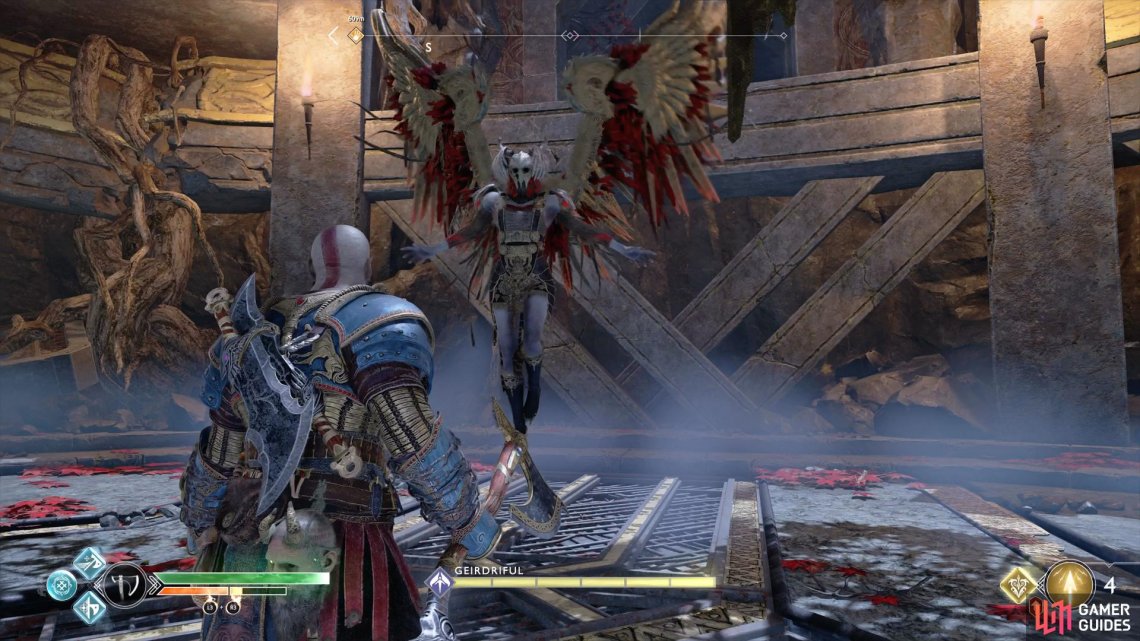 If you’ve already defeated Rota then you should have an easier time with Geirdriful as she has similar attacks as her sister with a few changes.

Like all Valkyries, Geirdriful has access to the Wing combo and Scythe attacks and it should be second nature by now how to defend against these. Her signature attack is performed when she rises in the air with a red ring around her, this signifies the beginning of her Shockwave attack where she will blind you if you’re caught in it. You can stun her out of the attack if you hit her with an arrow as she rises, otherwise look away if you can to avoid the attack. If you are caught in it then keep on the move, Geirdriful is mobile and you’ll have no idea where she is. 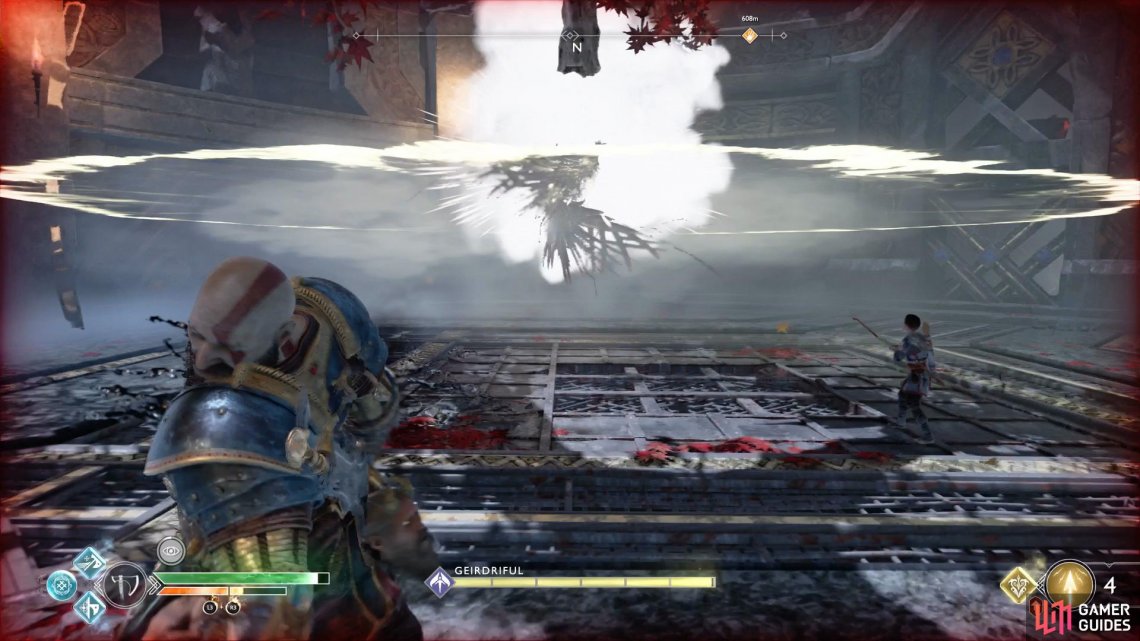 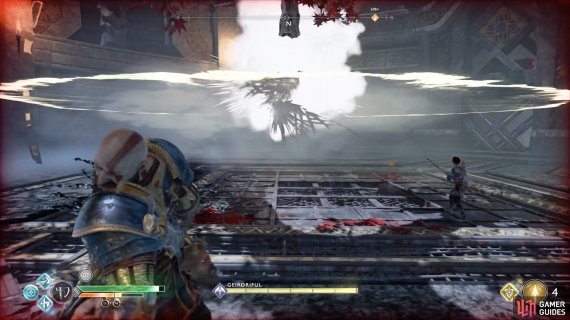 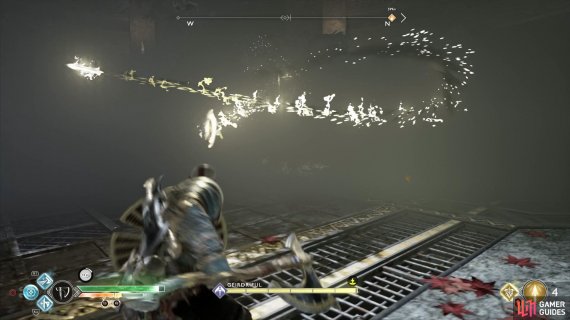 Look away or shoot her in the air to avoid the deadly Shockwave attack (left), if you are hit, the blindness will make it hard to dodge her attacks. (right)

The two variations of Chakram attacks are carried over from previous fights, remember to dodge to the side of the linear, unblockable attack and raise your shield to block the swooping Chakrams. These attacks obviously become very troublesome if you find yourself blinded. She can also dart in close to perform a punch attack, if you’re hit this will cause blindness too.

Her other new attack involves her raking her scythe through the ground to shoot a linear shockwave at you, this is unblockable so dodge to the side. Finally, she has the Dive attack that Rota had with one significant difference, she’ll only perform one dive at a time, this is actually your best opportunity to score some attacks on her. 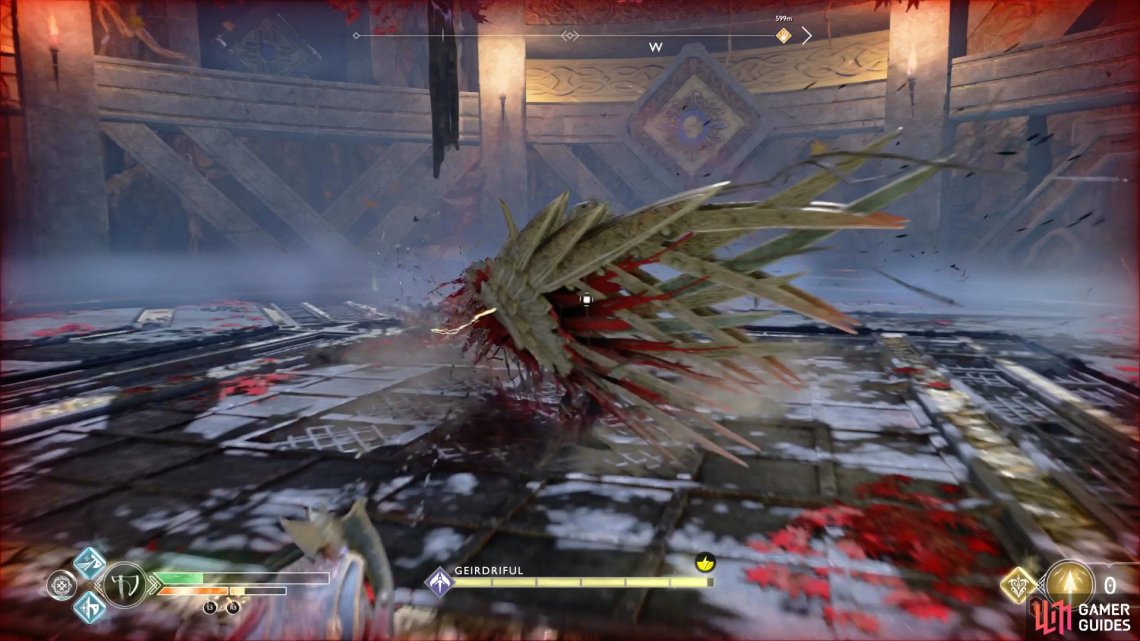 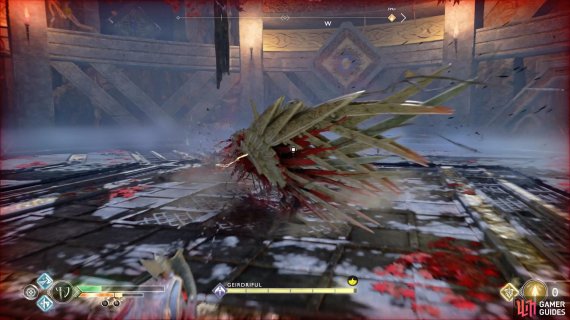 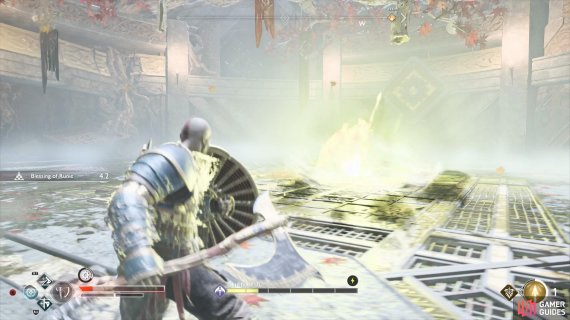 The punch attack is unblockable and deals heavy damage (left), the Scythe Shockwave becomes harder to evade when blinded. (right)

The battle all boils down to whether you can avoid the Shockwave attack that blinds you, if you can then you’ll have no problem putting her down, she’s an easier encounter than Rota for sure. Like always, pay attention to your Spartan Rage gauge and make use of it should you need it.

Upon her defeat, you’ll obtain Geirdriful’s Helmet and on the ground the Heart of Vanaheim Epic Enchantment along with more Asgardian Steel.