Hildr is the toughest Valkyrie you've faced yet as she's not only the highest Level Valkyrie so far but you also find yourself up against the clock. Before you even attempt her, make sure you have your Leviathan Axe fully upgraded along with the Blades of Chaos (using the item form Muspelheim). Next, make sure you have a full set of the Ivaldi's Deadly Mist armor set along with the Grip of the Maze Axe Pommel and the Eye of Niflheim Enchantment. This should give you enough time to kill her before the Cursed Mist starts sapping your health. When you're ready to face her, head down the hill from Sindri's shop and ignore the enemies while you hug the left wall through the first two rooms to save yourself some time.

As for Hildr herself, as you may have guessed, she has an Ice Affinity and as such, the Blades of Chaos Runics will be very powerful. Her first new attack is the Ice Hail, Hildr will launch a barrage of Ice Shards at you that you'll need to block until the final one. Watch for the red ring around her to indicate an Ice Chunk that finishes off the attack, you'll need to dodge this to the side to avoid heavy damage and the slow status effect. 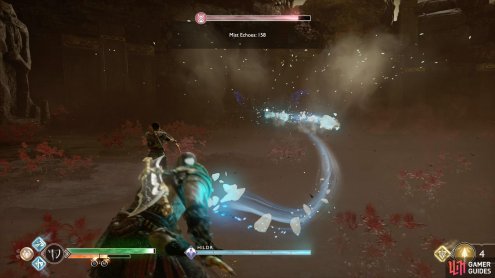 The rest of her attacks are ones you've already dealt with before from the other Valkyries. Hildr is a scythe wielder and as such, has the Scythe Combo and Shockwave from the other Valkyries as well as the usual Wing Combo. This should be second nature for you by now and you should be able to avoid this easily. Hildr also brings back the Wing Block from Eir, remember to use the Block Break skill to knock her out of the guard and gain an opportunity to score some heavy damage. Finally, Hildr can perform the dive attack where she will swoop across the arena attempting to grab you. You'll be pleased to hear that she will only do this once unlike the other Valkyries. 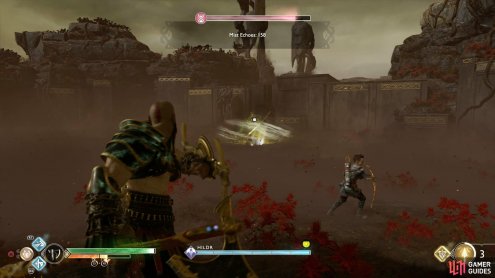 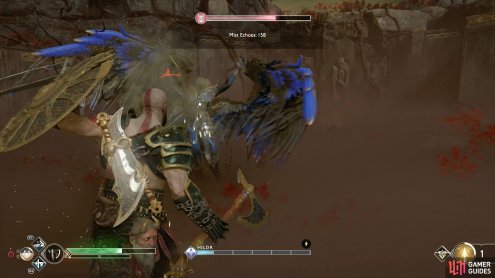 If you can safely avoid the Ice Hail attack then you should have no problem avoiding her attacks. It then comes down to beating the clock, you'll have to be aggressive in this battle to avoid running out of time. Make full use of Runics as and when they're avaialable, the Shattered Gauntlet of Ages and Spartan Rage, anything that will deal large amounts of damage to Hildr.

Following her death, the timer will be frozen so don't feel the need to rush. You'll obtain Hildr's Helmet along with the Cuirass of the Valkyrie, the Heart of the Valkyrie Epic Enchantment, two Asgardian Steels, a Perfect Asgardian Steel, the Wing of the Fallen Axe Pommel and an Aesirbane.