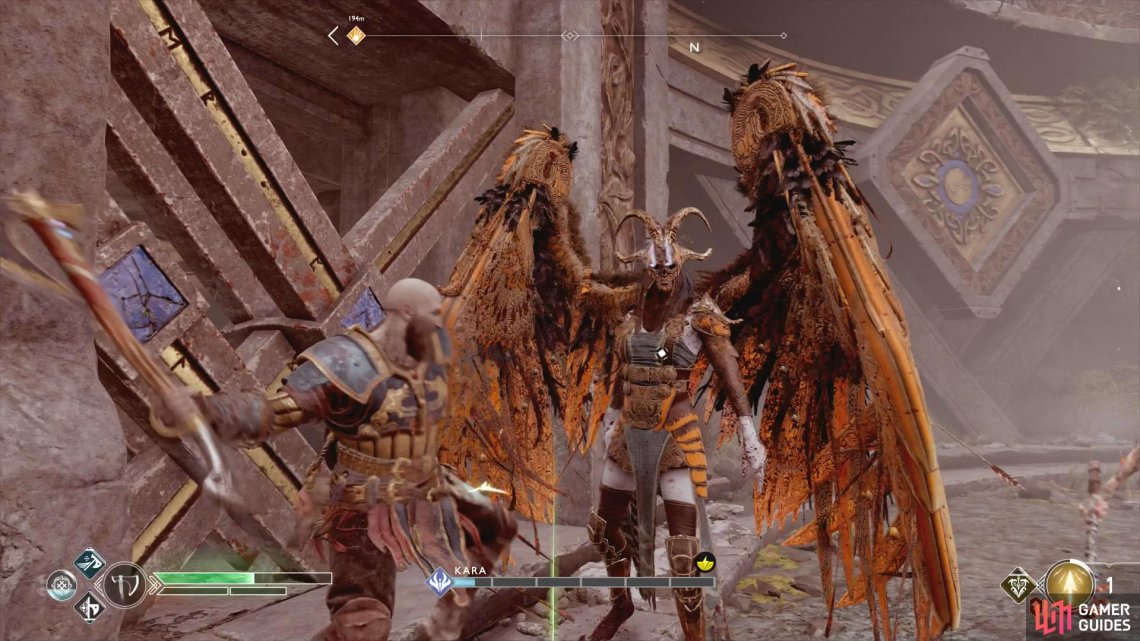 Before starting the battle, you’ll want to make sure you have Blessings of the Frost (found in Thamur’s Corpse) equipped to the Leviathan Axe and Cyclone of Chaos (found in Helheim) to the Blades of Chaos. Make sure you’re using Shock Arrows with Atreus and have Murder of the Crows equipped and fully upgraded. Finally, a fully upgraded Talisman of Unbound Potential is handy too, you’ll want to be utilizing your Runic’s a lot as you may have guessed, this Valkyrie is a summoner and crowd control will be vital.

Kara herself isn’t the main threat here, it’s the additional Draugrs she’ll summon throughout the battle. She will always have Draugrs summoned so you’ll need to manage them both. Note that the arena does have an edge that you can knock the enemies into if need be. 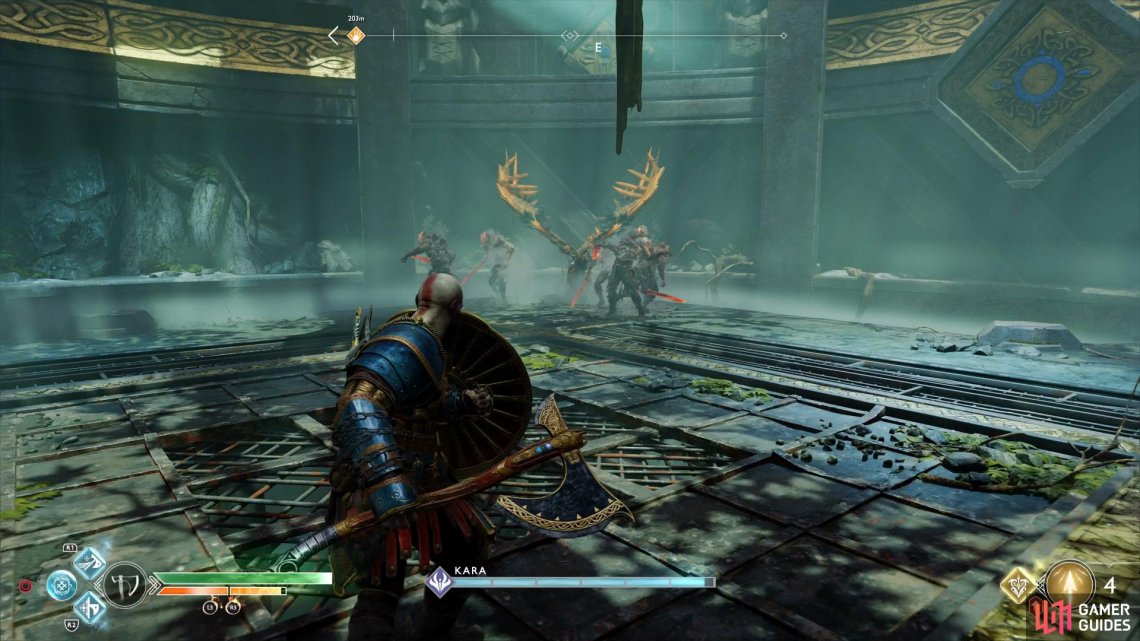 (1 of 2) The summoned Draugrs will always spawn around Kara 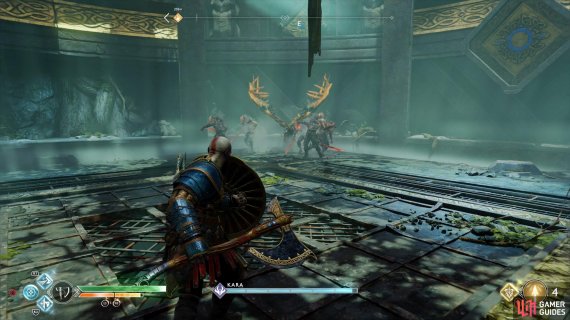 The summoned Draugrs will always spawn around Kara (left), try to keep track of Kara while you kill the Draugrs. (right)

She carries over the Wing combo and Scythe Lunge attacks from Gunnr (as do most Valkyries) however note that her Wing Combo doesn’t feature the punch after the second swing so you can block the entire attack. The Scythe Lunge should be dodge rolled to the side and used as an opportunity to attack.

If you see her rise in the air, check to see what color the indicator is as she’s about to perform a Chakram throw at you. If the ring is red then the attack is unblockable, she’ll throw the Chakrams in a straight line which is easy to dodge if you have enough distance. If there is no indicator then she will throw them in a swooping motion that tracks you, you’ll need to raise your shield and block it in this case. 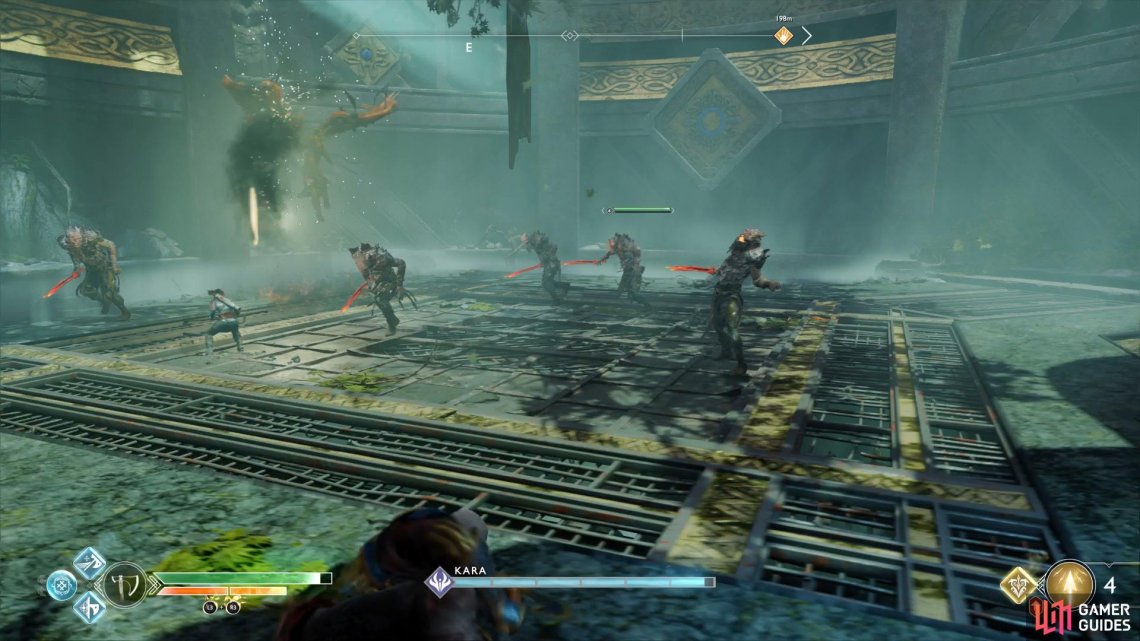 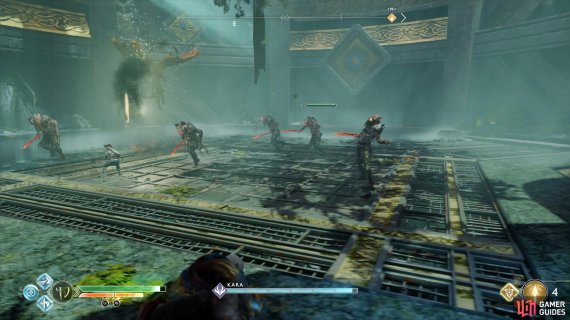 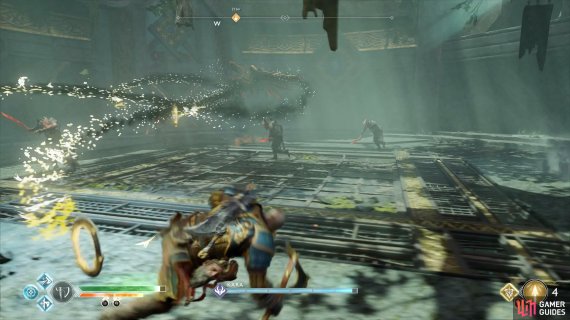 The biggest issue with this battle is the summoned Draugrs, they’ll always be there and you really need to keep your eye on Kara to be able to avoid her attacks. This is where the Runic Attacks come in to play, whenever there is more than two Draugrs summoned, use the Murder of Crows to lock them all down. The Cyclone of Chaos is fantastic for crowd control and will most likely take the enemies down quickly.

Save your Blessings of the Frost and Charge of the White Bear for Kara, these will inflict huge damage on her and with the Talisman of Unbound Potential equipped, you can reset the cooldown and go again. Don’t forget about Spartan Rage, this can really turn the tide in your favor especially if you have a Berserker’s Resurrection Stone in reserve. Like always, use it as a health regen tool first but once activated, focus on Kara exclusively. 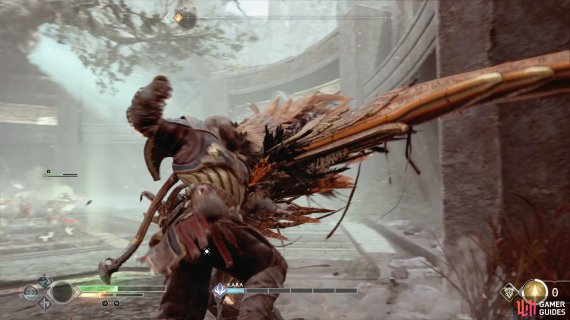 Blessings of the Frost adds huge damage to her (left), use Spartan Rage to pummel her in the corner. (right)

This will be a tough and chaotic battle but at Level 6 you should be high enough to take her out. Keep locked onto her at all times and manage your Runic Attacks well to take her down. Upon her death you’ll obtain Kara’s Helmet, loot the spoils on the ground to obtain the Talisman of the Realms, the Heart of Midgard Legendary Enchantment along with Asgardian Steel x2.