Battle takes place in a circular area of which there is a limited amount of space. You can move Lightning around using the Left Stick though she walks rather slow so it is pointless to waste too much time dallying when you could be attacking. The only instances where you may want to move out of range is when an enemy does a large Area of Effect attack that you can avoid the brunt of if you move out of reach. The Zomok’s Heavenly Storm is a notable attack.

Certain enemies can be vulnerable at different ranges, so if one only uses melee attacks, you can simply use long-range attacks and keep yourself far enough away to avoid damage and make them miss. There can be other instances where attacking a specific body part will deal a significant amount of damage or activate Stagger. So for instance, you may be using spells on an enemy but then you notice a weakness starts to show. At this point you can switch to close range attacks and exploit it. You should focus on using the right abilities to exploit weaknesses and know when to switch Schemata. Battles will have you largely reacting to an enemy’s attacks or resistances. A quick check of the Libra Screen can help you to solve what an enemy’s vulnerabilities may be. As with previous games, you will switch Schemata (as you would Paradigm Shift) depending on what kind of abilities you need to use at that point, all the while keeping an eye on your ATB gauge.

Equipping similar abilities on the same face buttons can help you attack continuously and build the Stagger Wave (see below) while you switch between Schemata. You can also choose to equip Guard abilities on the same face buttons as your two other attacking Schemata. This allows you to quickly block enemy’s assaults and then immediately switch back to offense afterwards. 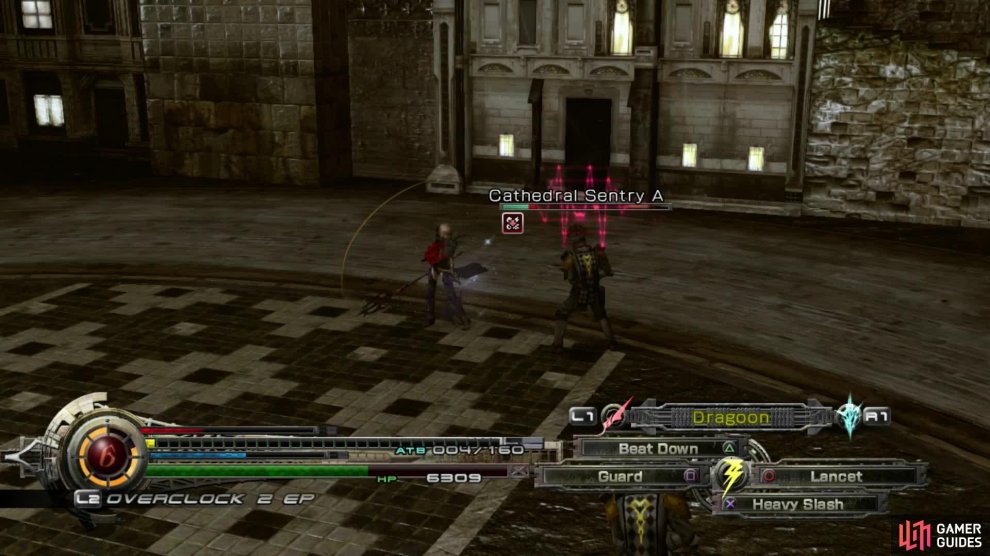 There can be instances during battle where you will face multiple enemies and one particular enemy is more dangerous than the others. You should learn which enemies to remove first to eliminate the chance of a more difficult battle. For instance, you may enter battle with a monster who buffs the other (usually weaker) monsters. You should remove the stronger monster first so it can no longer strengthen its allies.

The Stagger Wave and Staggering

Though it looks very different to previous iterations, the battle system is not that dissimilar to the other games. The basic premise of Stagger remains the same in that you must find an enemy’s weakness and break down their defences by exploiting it. 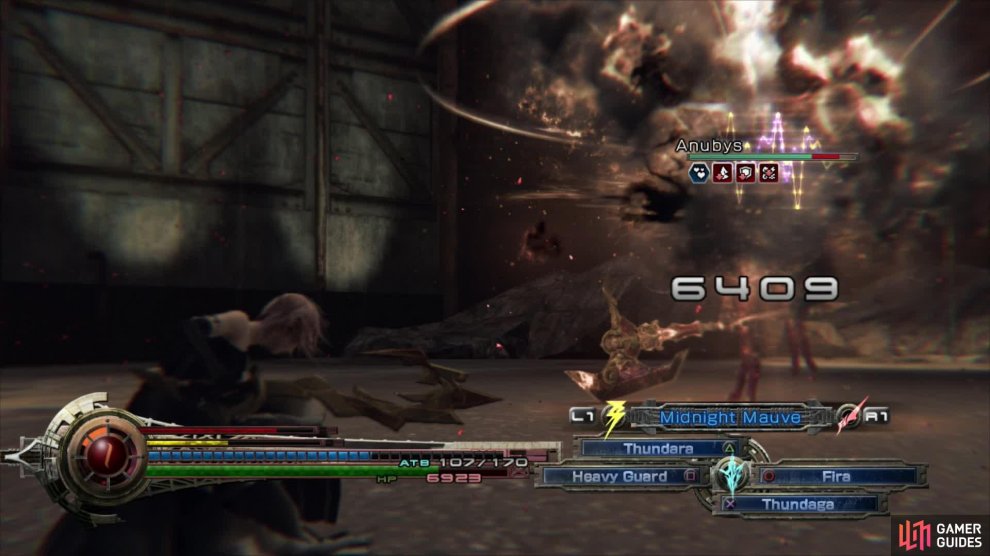 You have a Stagger Wave that tells you how close you are from achieving Stagger. This will start off blue with small peaks and gradually change from blue to yellow to red, with the peaks getting higher and higher the closer you get to Stagger. You can see how effective your attacks are by watching the wave closely for movement. Should you find an attack makes the wave start to jump, you know you have found at least one potential way to Stagger an enemy.

After finding a successful attack, it is then a simple matter of attacking with similar attacks until you break through. The wave can also be maintened using a physical attack, much like previous games where the Commando role involved chain maintenance.

There is a noticeable change to an enemy’s stance when they have been staggered. Usually they keel over and you can then really ramp up the damage. Often when an enemy is staggered, their status can change and they may be vulnerable to new things that they weren’t before. Check Libra for information. 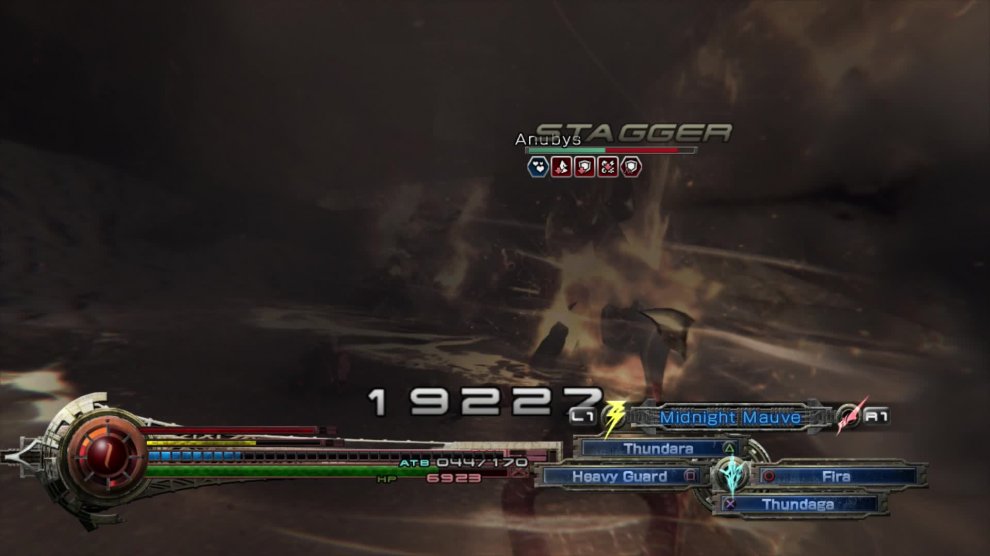 Depending what attack caused the Stagger will then depend what weakness they will show in this phase. Each enemy usually has multiple ways of being staggered, and depending whether the attack was magical or physical, will then depend what weakness they will be afflicted with. More often than not, staggering with a physical attack will make them vulnerable to magic attacks and vice versa. You can see what kind of Stagger you have achieved by their status bar. See the status ailments section for info on the different types.

In addition to the type of stagger there can also be levels of stagger. Sometimes staggering an enemy once can then lead to being able to inflict a further stagger. Usually as staggers grow in level, the enemy becomes more and more vulnerable to abilities. Achieving these levels quickly can make an otherwise difficult battle a much simpler affair.

Some abilities can be enhanced by achieving Perfect Timing with the animation. These fall into distinctive categories:

You can tell when you have achieved Perfect Timing by the caption on screen and Lightning will also glow with a gold aura. For your first run of the game, it is not essential to master this technique. Start out with practising how to guard and go from there.

Many of the abilities and elements, as well as status ailments/enhancements remain unchanged from previous games. If you have played the other games, you will be familiar with their functions. There are a few new types though that you should be aware of.

Each enemy has affinities and/or resistance to certain types as well as weaknesses.

Halved - enemy takes half the damage it normally would

Absorbed - damage will heal the enemy

Status enhancements can be applied to Lightning or enemies. Many enemies you encounter will employ buffs to augment their abilities and increase damage. They can also be used to neutralise any negative status effects.

Haste - increases the speed of the ATB gauge refill 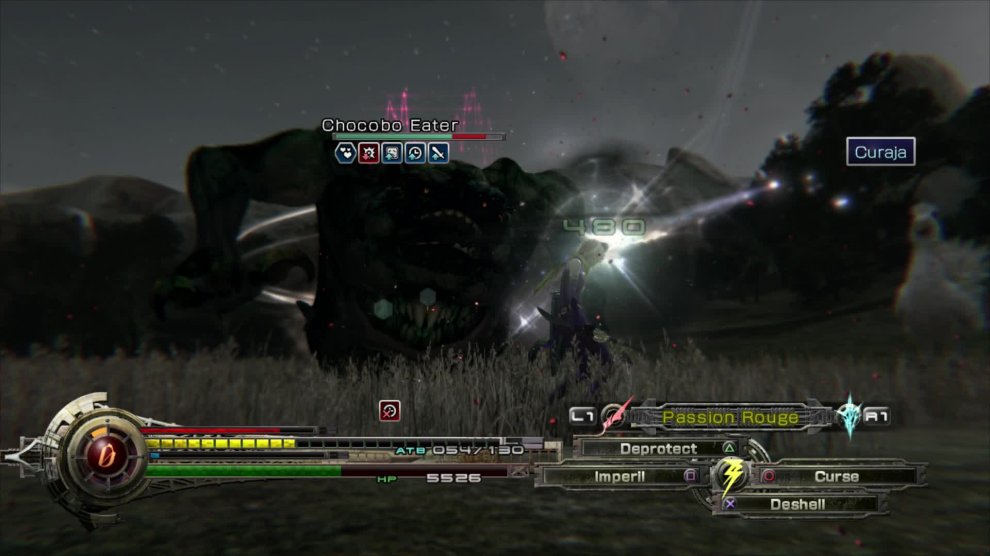 These act as a neutraliser where any buff is in play or they can weaken a target. For instance, if an enemy buffs itself with Bravery, you can cast Debrave and remove the enhancement. If there is no buff in place, the ailment will be applied and severely weaken an enemy. Status ailments play a huge role in how quickly you finish battles and can make tough encounters much easier when used correctly.

Pain - prevents the use of physical attacks

Fog - prevents the use of magic attacks The following are a list of ailments that can be induced with a certain Stagger level and can be in place at the same time as other ailments: