1-2 In The Shadow Of The Heretics

Standing atop the monument in the centre of the plaza allows you a very wide view of the surrounding area. At the stroke of midnight, the Children of Etro will spawn at the east end of the plaza. There is a large group of them and they are easily distinguished by their white robes and hoods. 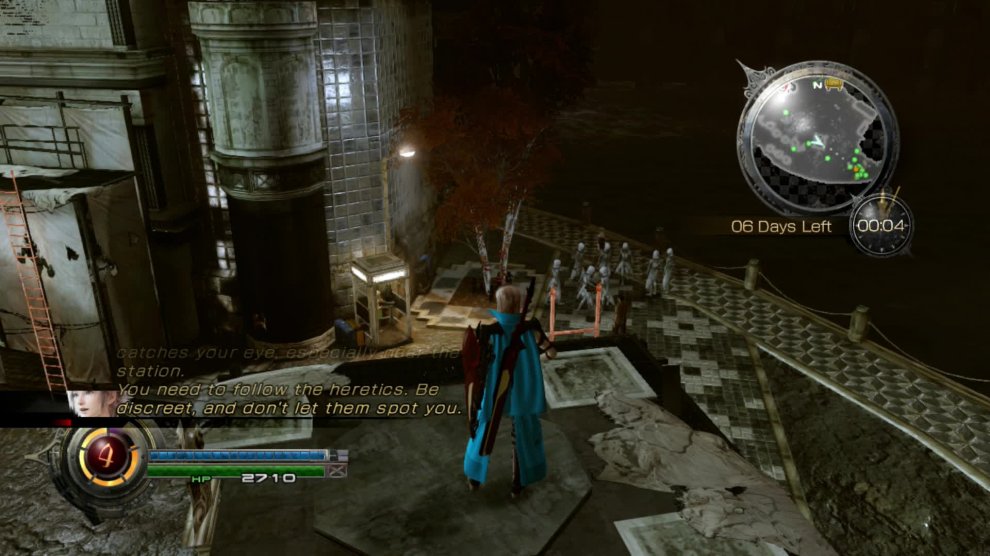 Watch them from your lofty position until they disappear from view and jump down. They will have moved from east to west at this point, through the open gate towards the Forsaken Graveyard. Move slowly after them, keeping them within your eyeline but do not alert them to your presence. Use walls and corners for cover until they have moved away.

Eventually, they will reach the locked door at the Graveyard. Duck behind the red boxes here (marked with the blue !) for a cutscene and the end of this quest line.

Let’s go and explore Old Town! There are numerous items to collect here and a quest to fulfill. Return to the plaza and talk to the little girl near the ladder where you found the Fighter’s Emblem. She has lost her Carbuncle Doll. Let’s go and find it then! 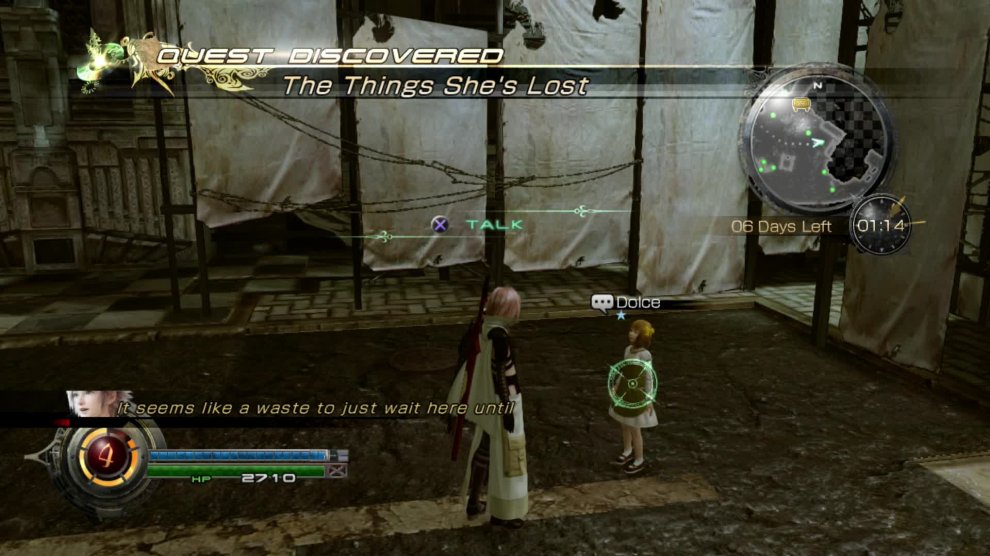 Head to the shops in Old Town first. Take the small alley on the right first and when you get to the end, make the leap towards the treasure for the Runic Ring . Talk to Seger for the Shaolong Gui Shell (needed for a quest). Next, talk to the vendor of the Sorcery Shop and take the synthesis tutorial for a free upgraded Attack Level 1 . To the right of the shop, there are tons of red boxes you can smash with your sword. Collect the Quill Pen and the medal here. 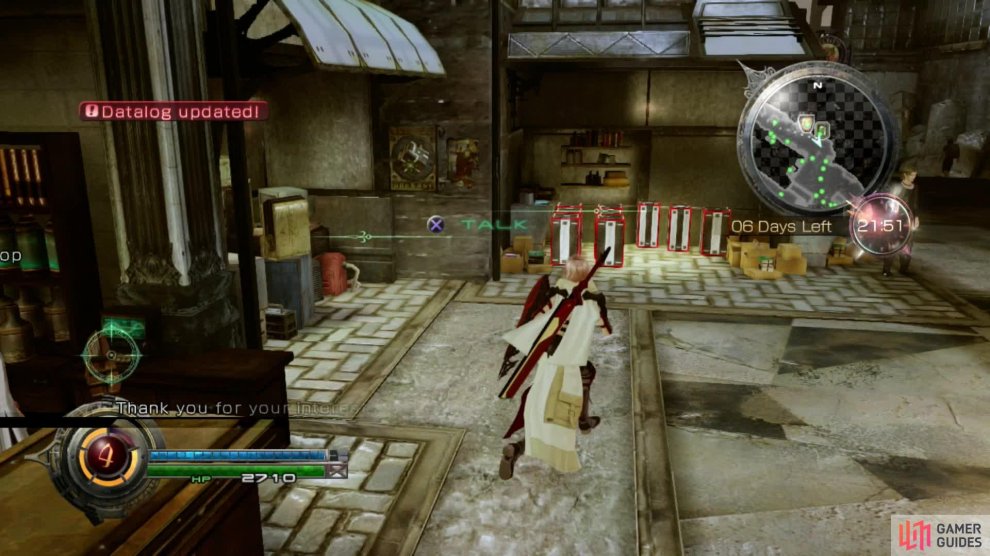 Next to Seger, the man who sold you the Shaolong Gui Shell, there is a Green Carbuncle Doll sat on a pile of boxes. Pick it up to return to Dolce on the way back. 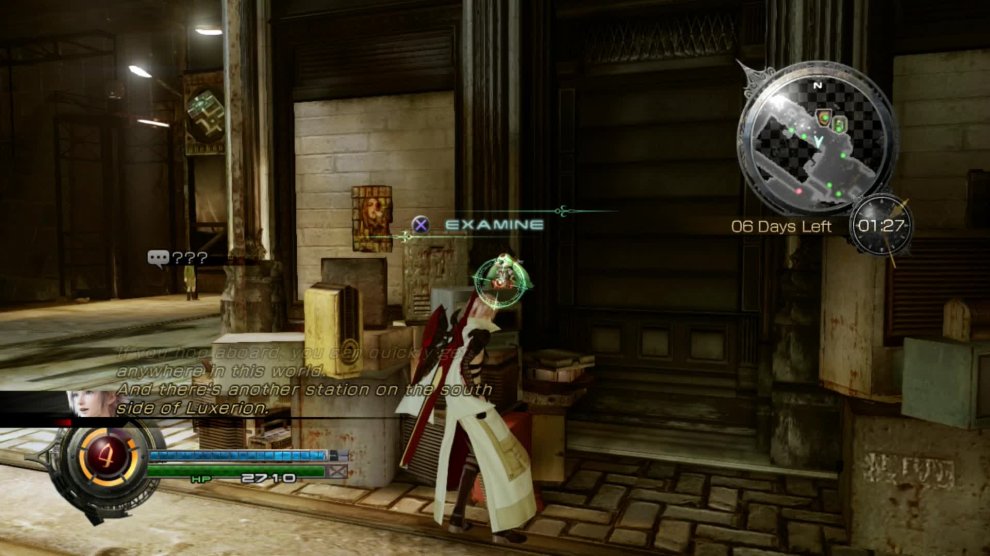 Turn around and run left and you will see more red boxes in a closed shop. Smash them and collect Sparkstrike Level 2 from the treasure sphere. Finally, head towards the Warren, through the gate and turn left after you pass through it. There is a sphere with Thundara Level 2 near the ladder. 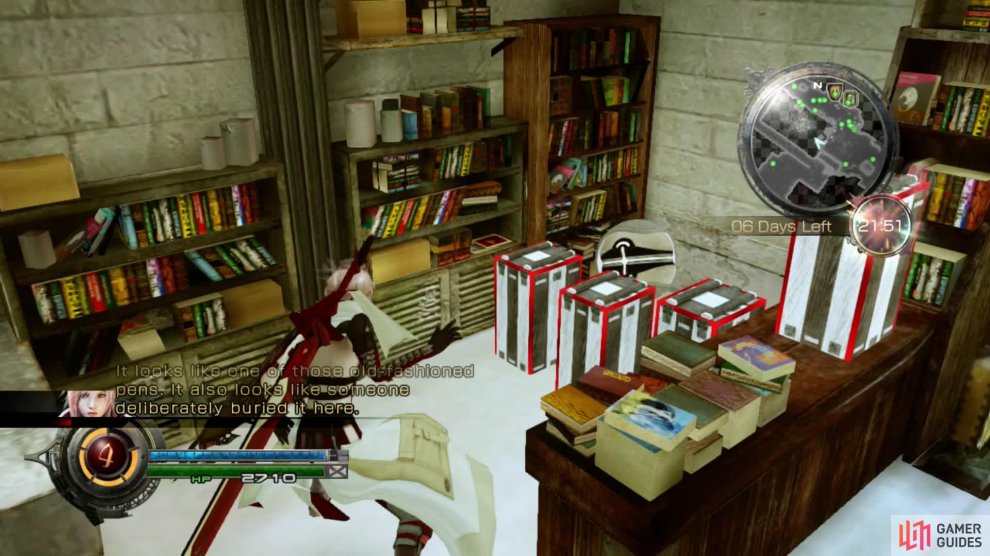 After you have collected what you need from Old Town, you should start heading to the South Station. Go back through Old Town and the Centrum and you will find yourself in the Commercial District. There are two valuable treasure spheres here: the Twist Headband and the Magician’s Token . Collect those and carry on to the Arcade area. Talk to the man stood near a pillar to activate the “ Soul Seeds ” quest. 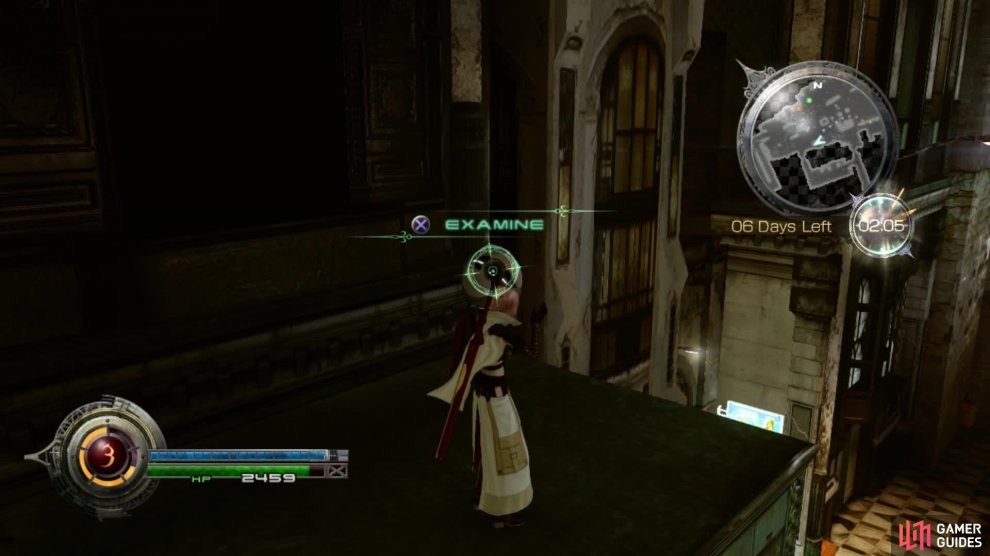 After speaking with the man, he asks you to purchase a Seed Hunter’s Membership Card for 2,000 Gil. Hopefully you have enough Gil left to purchase it. Buy it and then run towards the guard at the other end of the room. The Chaos has taken over the next area but in it are the shining purple eggs you need for the quest.

Run into the Chaos but do be aware of monsters that spawn here. They are much stronger than usual so avoid them unless you feel particularly confident in your ability. Collect the Soul Seeds scattered to the left and in front of you. There should be three in all though sometimes there are only two. Return to Baird and collect a nice sum of money for your time and the quest reward. 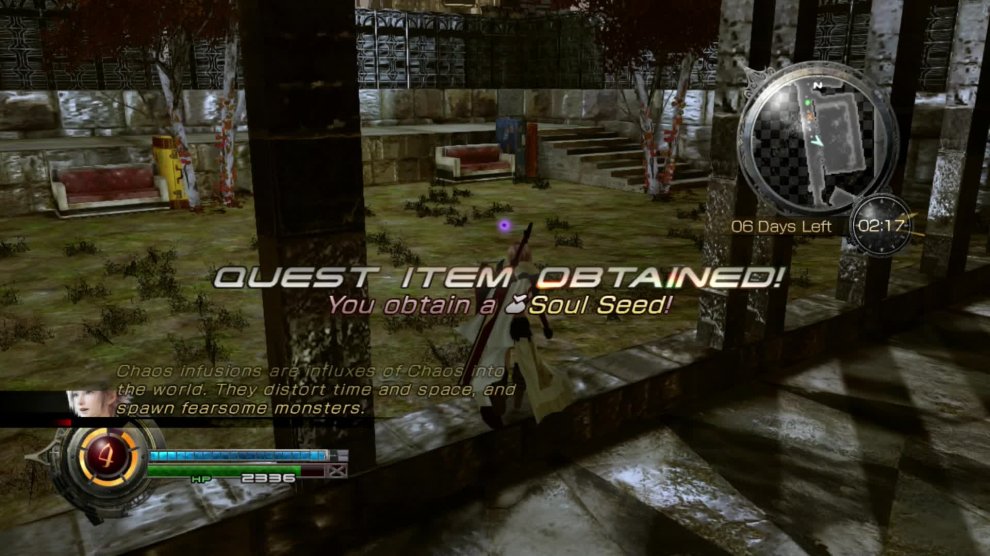 Soul Seeds : You really should complete this quest because you will then gain a steady source of income from selling Soul Seeds. Chaos Infusions appear everywhere and there will always be at least one Soul Seed per Infusion.

Carry on through the Arcade to the South Station. Pick up the Guard Level 2 ability in a dead end north of the station. Finally, head to the east of the station to find a Guard Glove .If you still have some time remaing in the day, return to the station and catch a train to the Dead Dunes. The EP ability Teleport will be unlocked at this point, allowing you to immediately transfer between places you have previously visited. You will not waste any in game time doing this.

A Quick Detour To Dead Dunes

Note : This section is completely optional. The only reason for coming here at the end of the day is to gain access to a few useful abilities early that will help you in the next few quests.

This is a cheery place isn’t it? You can go sand-surfing here if you wish. You know, in between saving the world and stuff. Chat to the train worker sat down just outside the station for a sneaky morsel of information.

A bit further to the north is an Outfitters. Purchase the Passion Rouge garb from him because it’s pretty awesome and will probably be your default garb for some time. 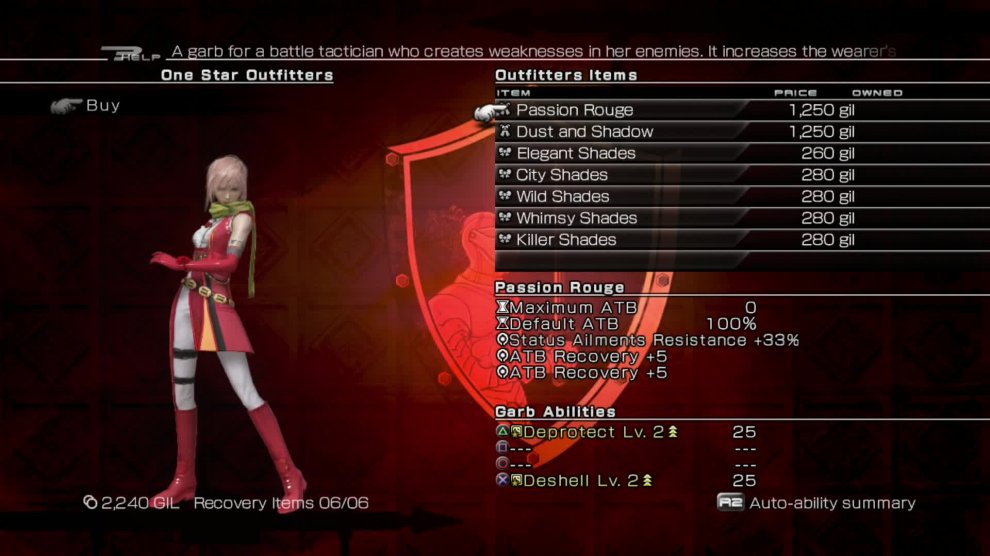 You should have a bit of time left so let’s go and pick up a nice handy ability at the far northwest of the Giant’s Sandbox. Up some steps here is the Galestrike Level 2 ability. 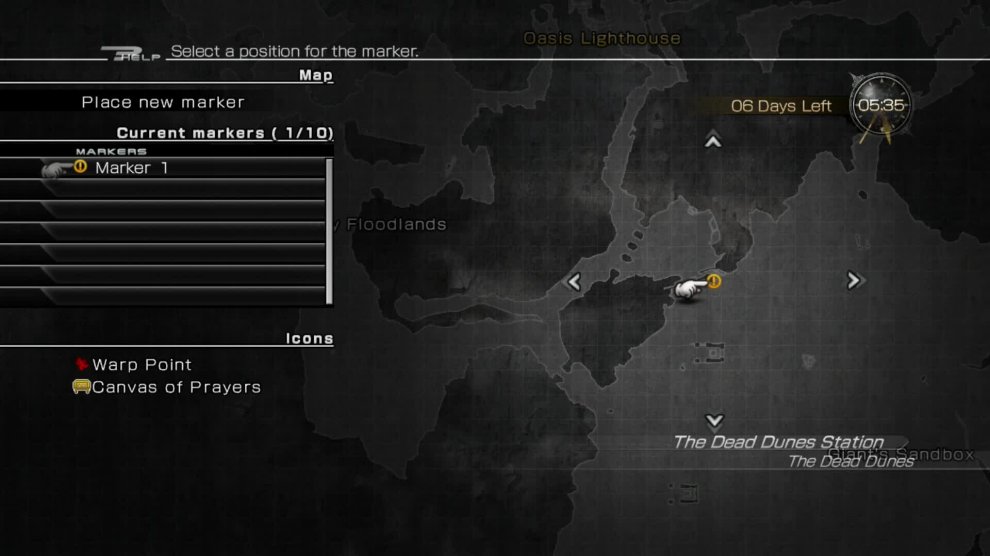 Avoid all monsters on your journey or you’ll end up in a bit of a mess at this early stage. Use Chronostasis to extend time if you need to. After acquiring Galestrike, you can now return to the Ark to end Day 1.

Note : You should aim to complete Quest 1-2 and the Soul Seeds sidequest between midnight and the end of Day 1. It helps enormously if you buy the Passion Rouge garb, even if that’s the only thing you have time to collect in Dead Dunes. The other things are optional but again, give your stats an added boost.