Note : Three of the numbers can be found at any time of day but the fourth can only be found after midnight when the Warren opens up. The phone booth at the entrance to the Forsaken Graveyard can only be accessed between the hours of 00:00 and 06:00 so it makes sense to leave this section till now. This is also why we left Luxerion when we did on day 1.

After completing the Moogle sidequests, teleport to Luxerion North Station to complete 1-3, 1-4 and some of 1-5 of the main quest line. Those Children of Etro have had it coming for a while and you can now administer Lightning’s brand of justice. You can collect some nice items while you’re here as well and complete another sidequest if you wish.

The first number of the code is located a short run away at the end of an alley in the Commercial District. Note, that there are a number of NPCs littered about the city that have information on where to find the numbers. They have a speech bubble above their heads if they have information. If you get information from an NPC, the area will immediately be marked with a blue ! on your map. Did You Know? - Etro has her own alphabet. You may have seen it emblazoned on Lightning’s sword and shield in XIII-2. You can also see it on the Eidolons in the first game because they come from Valhalla, Etro’s domain.

A bit further southwest is the next number where the Residences and the Warehouse District intersect. The number is on the side of the stairs there. Run south to the South Station to find the third number. You can find it next to a phone box in a corner.

The final number is located all the way in the Warrens. They only open from midnight onwards so you may have to wait a little for the gate to open. Do some shopping and stock up on items, synthesise your abilities and just mooch around a little. When the gate opens, head to the spot to find the number on a wall next to what looks a lot like an Oracle Drive. Oh, who’s this? If you didn’t know who the Shadow Hunter was by now, then you will for certain after the cutscene. 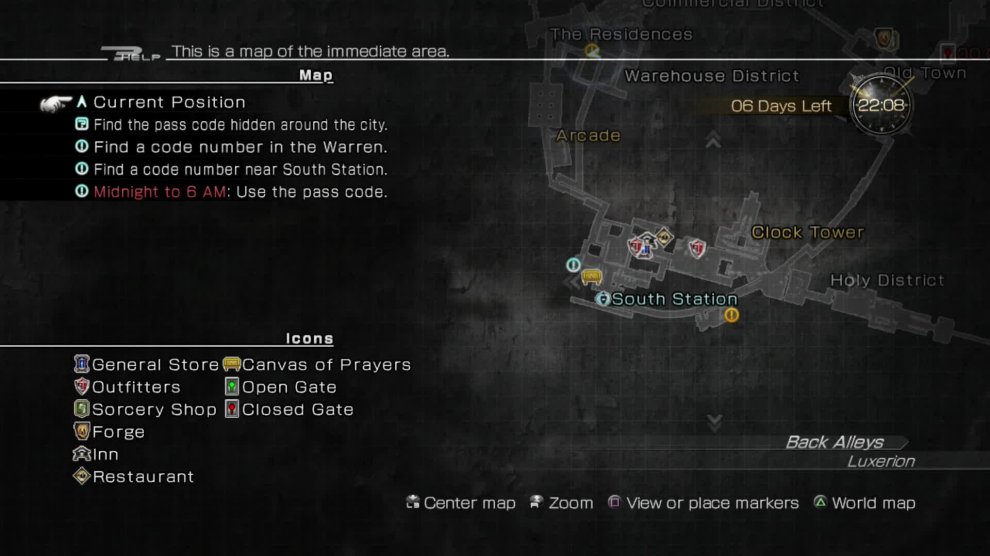 We finally have all four numbers and can open the way to the Forsaken Graveyard. Run to the blue waypoint marker and to the phone box there. Enter the numbers in grey into the boxes below to open the gate. Before you head off, make sure to equip the Electronica schema in place of Ignition because many of the enemies are weak to thunder.