1-5 Hunter In Light And Shadow

The Shadow Hunter is going down. We are finally in a position to give him a good kicking and our stats now allow us to defeat him easily and obtain 5* for the battle. On your way to the Den of Shadows, talk to the drunk sat down in the south end of the Warrens. Lackley’s quest “ Get The Girl ” sends you to Yusnaan, your next destination after returning to the Ark at 6am. You might as well pick up this quest since we are headed to Yusnaan soon.

After speaking with him, return to the Den of Shadows and the waypoint marker there. Setup your schemata before heading to the waypoint and the battle.

This setup is one of the best available at this stage of the game unless you have access to DLC garb. It will allow you to finish the battle in a matter of seconds and with 5*.

This will be your debuffing and defensive schema. The Stormbane Choker will protect you from the majority of Noel’s attacks and the high Guard level allows you to block all but the strongest attacks. You can start with a good debuff, guard and then go on the offensive with Thundara to build his gauge. 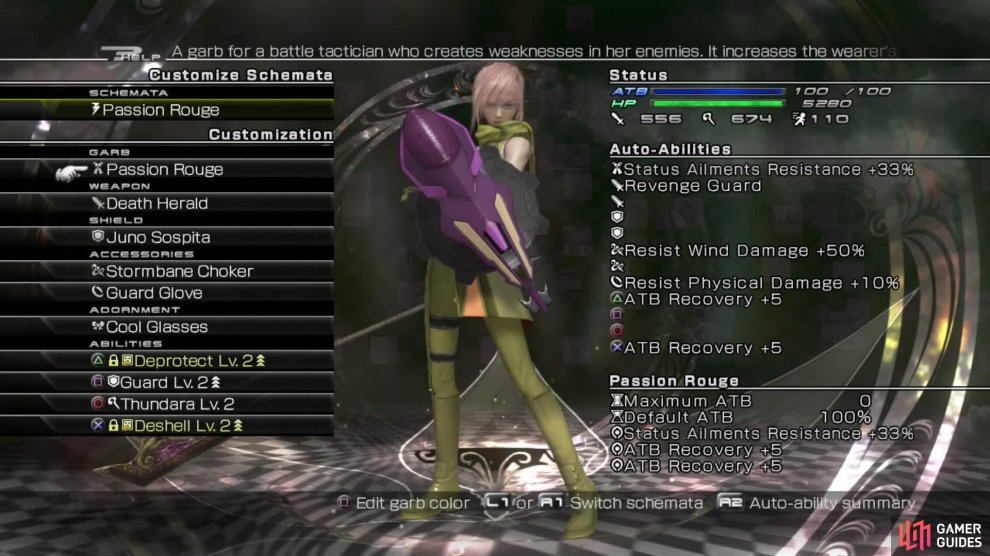 Dragon’s Blood will be used primarily after Noel has been staggered to really maximise any damage. It has the most damage-dealing potential and should be used as such. The Battleaxe of the Believer you just found is perfect for this schema and battle. It has a high strength stat. Add to this the Fighter’s Emblem and Enthunder from the Thunderbird Bracelet, you will do a ridiculous amount of damage per hit. 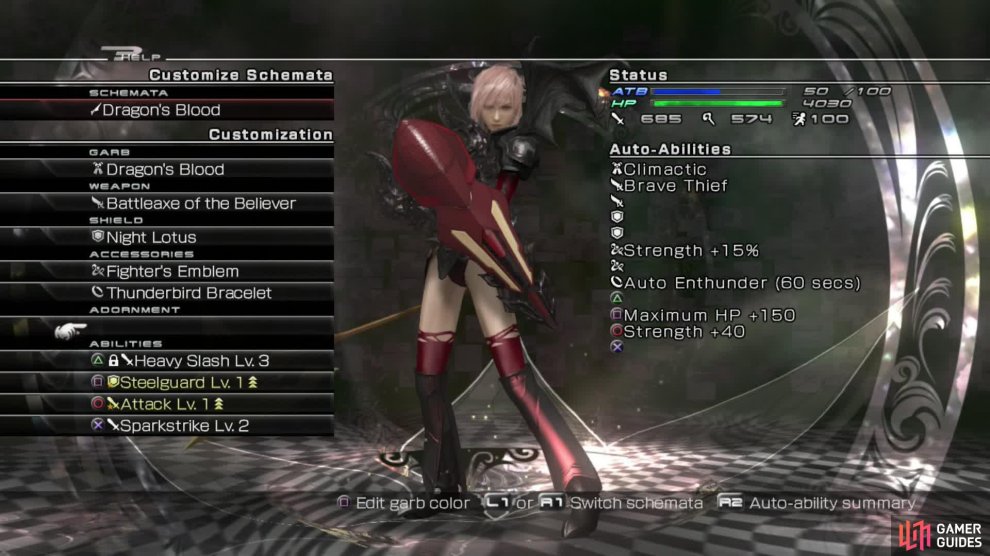 This last schema will be your stagger building schema. Mixed in with Dragon’s Blood you should be able to stagger Noel easily. A good weapon can allow you to do a lot of damage with Thunder+ while the Pendragon will boost your HP, allowing you to focus on offense rather than defense. If you do need to use an item, the Healer’s Lore gives its effect a nice added boost. 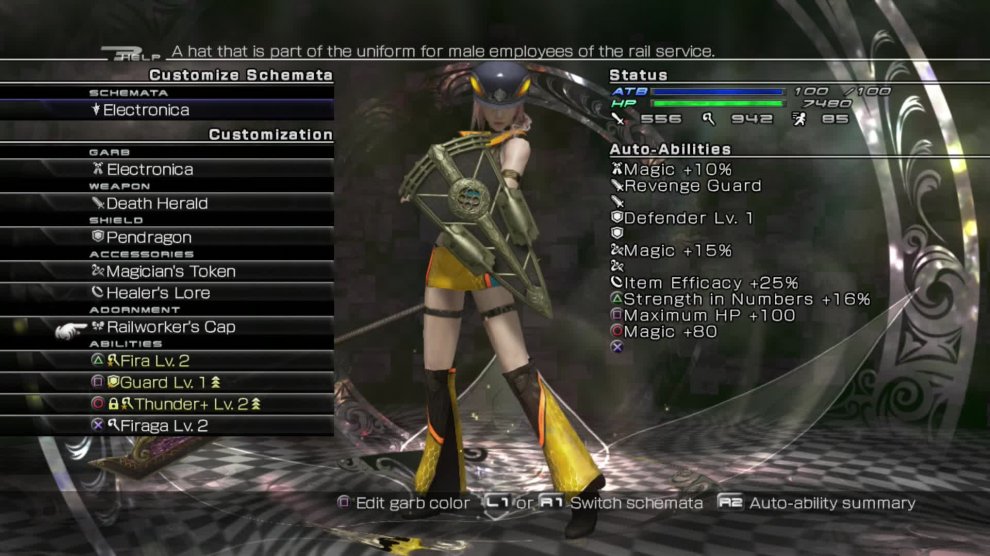 Start by casting both Deprotect and Deshell because Noel is very vulnerable to both. You should maintain these debuffs throughout the battle but especially before you stagger him. Noel will always launch an attack with his weapon as soon as you have debuffed him so use Guard.

Switch to Electronica once his attack is over and set about building his Stagger Wave. Throw Thunder+ at him, interspersed with Sparkstrike and Thundara from the other two schemas. One round of each ability should see him staggered but make sure to stagger him using Sparkstrike for maximum effectiveness and also make sure Deprotect and Deshell remain active. As soon as he is staggered, switch to Dragon’s Blood if you aren’t already and unleash Overclock.

You can then launch a massive Sparkstrike assault on him to the point where his Wave turns red again. Eventually, your Attack option will change to Launch and when it does so, immediately Launch him into the air. With a full ATB bar (coming out of Overclock), and during Launch, the Heavy Slash ability on the Dragon’s Blood schema will turn into Smite . Smite as soon as you can for massive damage. Watch his HP bar plummet. 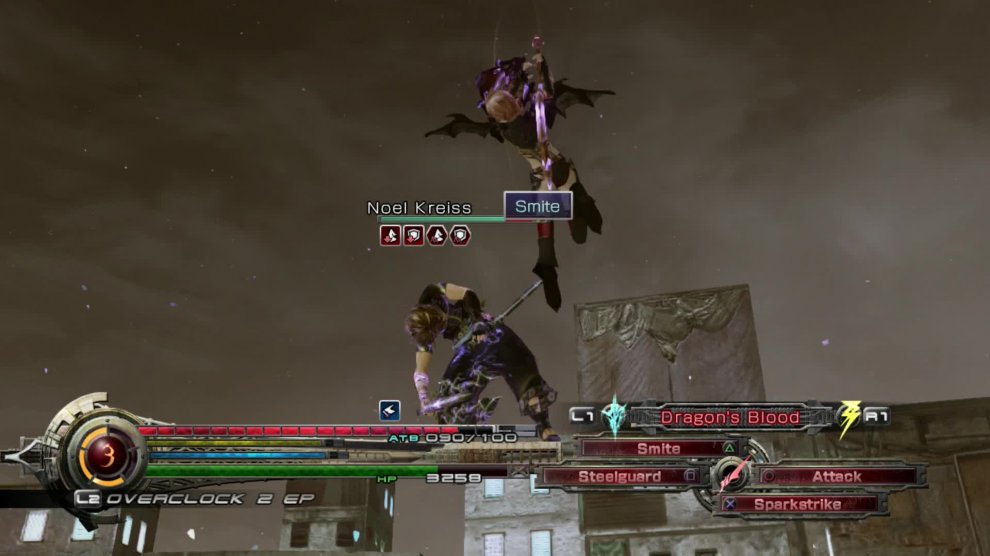 After that burst, simply return to basic attacks. He will always launch Meteor Javelin after a stagger so make sure to Guard while in the Passion Rouge schema to negate the worst of the damage. A last burst of Thunder+ should see him fall with the battle lasting well under a minute if you implement this strategy. Easy as pie!

After the battle, you will receive a massive 10000 Gil, 5 EP, Max EP +1, HP +240, Max ATB +10, Strength +84 and Magic +70. The extra EP is very welcome and the boost to your stats will make the next day pass without too many hiccups. Pick up the Shadow Hunter weapon after the battle before you warp back to the Ark.