Talk to Sarala (the pink haired girl in the vegetable patch) and she’ll give you some more Gysahl Greens. Sadly, she doesn’t have a full crop of them because her father has disappeared. Talk to her again to initiate the “ A Father’s Request ” sidequest which requires you to head to the Jagd Woods. Before you do that though, there are a few things to take care of here.

Just outside the settlement is the Hunter Chief and he’s very thankful he saved the Angel. He is so thankful that he gives you Chocobull to further the Angel’s healing. The final item available in Canopus Farms is kept by the Innkeeper who will give you Fuzzy Sheep Milk after talking with her. Go back to the Angel and feed him all three items. His health will be significantly improved afterwards but not enough to restore him completely.

Before leaving for Jagd Woods, equip Ignition in place of Electronica because the extra Fire damage will help immensely against the majority of monsters in the woods. Run to the entrance of the woods and speak with the hunter astride the Chocobo. He asks you to help him with a quest “ The Right Stuff ” and you will need to acquire 6 x Vibrant Ooze . If you have been killing Blue Flans, you should have plenty of them by now. Complete it straight away and he will give you a Mystical Meal for the Angel. 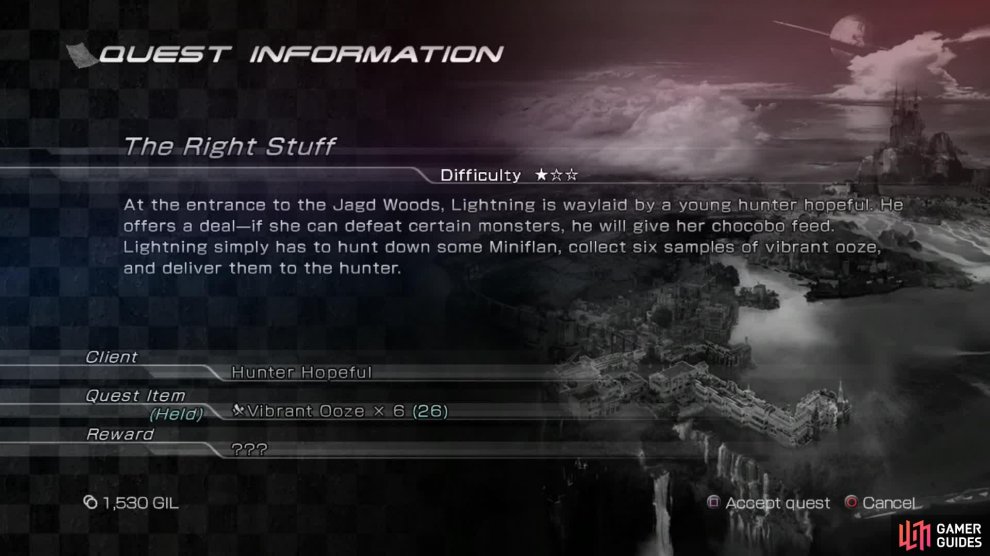 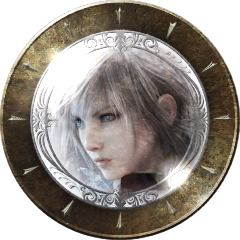 Proof of clearing 5 side quests. It is a fine beginning, but the journey is still long.

Run straight back to the Angel and feed him the meal and then he will be fit enough to be ridden. He can run as fast as Lightning can dash but without the rest stops in between, making your travels around the Wildlands a lot faster. He will also become a battle companion, gaining access to stronger spells and healing as he gets stronger. You will receive 1200 Gil and a White Chocobo Chick adornment as well as +80 HP and +8 to both Magic and Strength.

Run him back to the Jagd Woods and straight to the village in the centre of the woods. Along the way, collect the orange mushrooms for Chocoborel , needed for a sidequest where you can obtain another healing item for the Angel later on. Also note the positions of the Forest Fertilizer and collect the ones on the way to the village. This is the fertilizer requested by Sarana for her quest. See the map in the sidequest sections for full details of their locations. 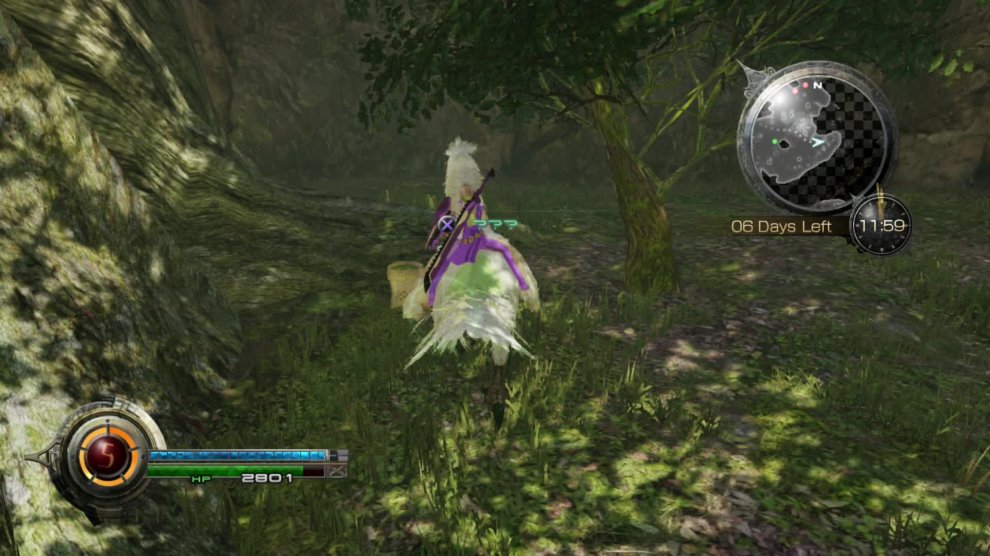 On your arrival into the village, you will gain a teleport location for this area. Go straight to the pen with the girl and the chocobo for another sidequest “ Chocobo Cheer ”.

Talk to the woman next to the Outfitters called Cardesia . She can make Chocobull (another healing item for the Angel) for you if you collect the right ingredients. You will need 8 x Chocoborel and 8 x Slug Sweets . Hopefully you will have been collecting Chocoborel whenever you see it. Slug Sweets can be found off Rafflesia and there are many to be fought in the woods if you still need them. If you don’t quite have enough Chocoborel, head back out into the woods and collect a few more. Check the map for their precise locations. 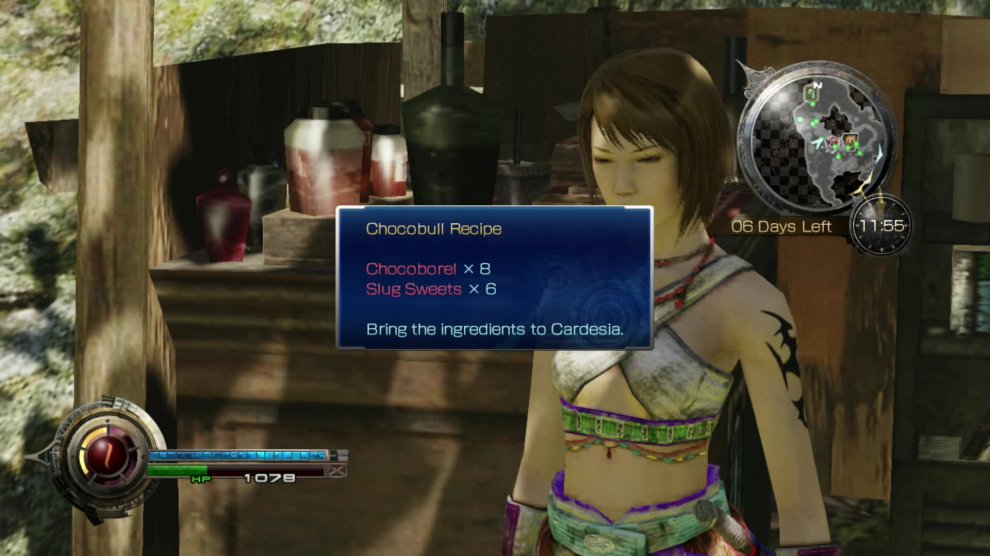 Remember to purchase the enemy information from the Adventuring Essentials vendor in the village and synthesise any spells you have collected to make stronger ones. You will need all the power you can get soon.

Now, go north to find the Yeul’s Flower and if you haven’t collected enough Chocoborel yet, do so now. The flower is white and glows with a magical light. Be aware of the Chaos Infusion nearby as well. You can pick up some more EP if you need it and some Soul Seeds. You should be able to defeat any Chaos Infused enemies at this stage.

Yeul's Flowers :These special flowers provide a massive boost for the Angel's health. During the Chocobo Cheer sidequest, you will learn about their powers. Collecting them will save so much time and allow you to completely restore the Angel's health much faster. 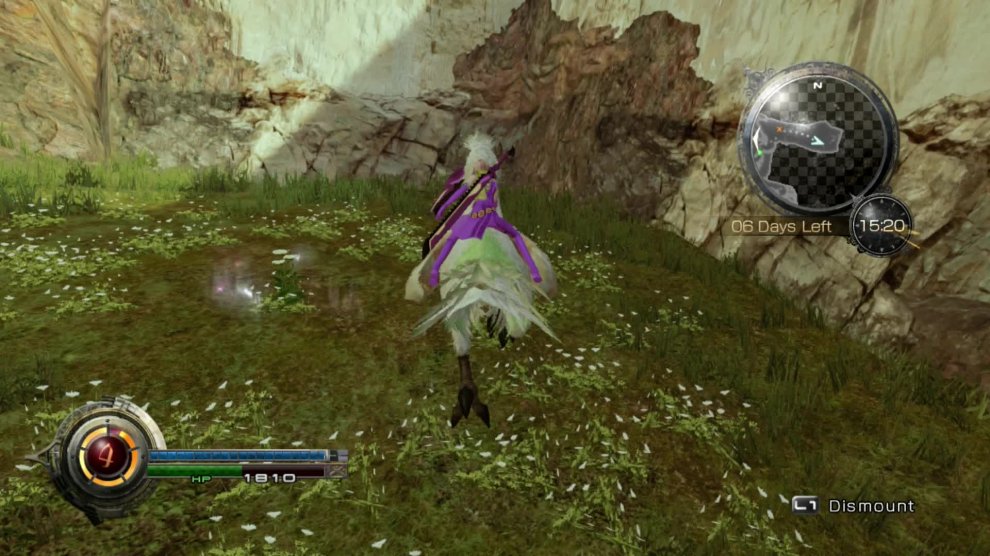 Return to Nadia and Cardesia in the village to complete their quests. You will now unlock Cardesia’s personal quest " A Final Cure ." There is no need to do it now though. Just take the Chocobull and feed it to the Angel for more healing. Stop off at Canopus Farms to speak to Sarana and plant the seeds in the plots.

Next, head up to the City of Ruins to collect the next Yeul’s Flower. Be very aware of Reavers and Chaos Infusions with Reavers. You will not come out unscathed from either of those battles. Feed the Angel the flower and you should now gain access to the Gliding ability, allowing you to reach some very useful items around the Wildlands.

There is another Yeul’s Flower down near Aryas Village in the south. Take a trip there to collect it (and pick up the Aryas Apple while you’re there) then stop off in the village to access and complete another sidequest “ Fuzzy Search ” for another healing item.

Sweep the Wildlands For Items

Note : Another optional task but if you want to collect some useful items, see the list below for their locations and check the map of the Wildlands in the map section. Use Chronostasis if you need to because at 7pm, you should head back to Jagd Woods for some Moogle fun. The Moogle quests give you a significant and helpful increase to your stats so it is highly recommended you head over there next.

Note : We recommend completing 3-1, 3-2 and an item sweep by 7pm. At 7pm you can then enter the Moogle Village to complete tasks and you can then return to Luxerion to finish the Main Quest. Do be aware of the time and as usual, only use EP for Chronostasis and major boss battles. Try to avoid the strongest monsters so you don't have to keep escaping and wasting a lot of time.