2-2 The Legend of the Savior

When it’s ended, run up the stairs to find the Director. He’s pretty eccentric and luckily, he’s all for Lightning’s plan. Fireworks, we need fireworks. This section can take a little time and it must be completed before the finale at 3am. Liberal use of Chronostasis will allow you plenty of time to explore and collect all possible fireworks.

You can find the Corundum Pin underneath the stage not far away from the Pyrotechnician Boss. West of the Pyrotechnician is a girl with a sidequest “ Adoring Adornments ”. This is the reason behind why you were told to buy a large selection of adornments earlier. If you need any more, there is an Outfitters nearby. 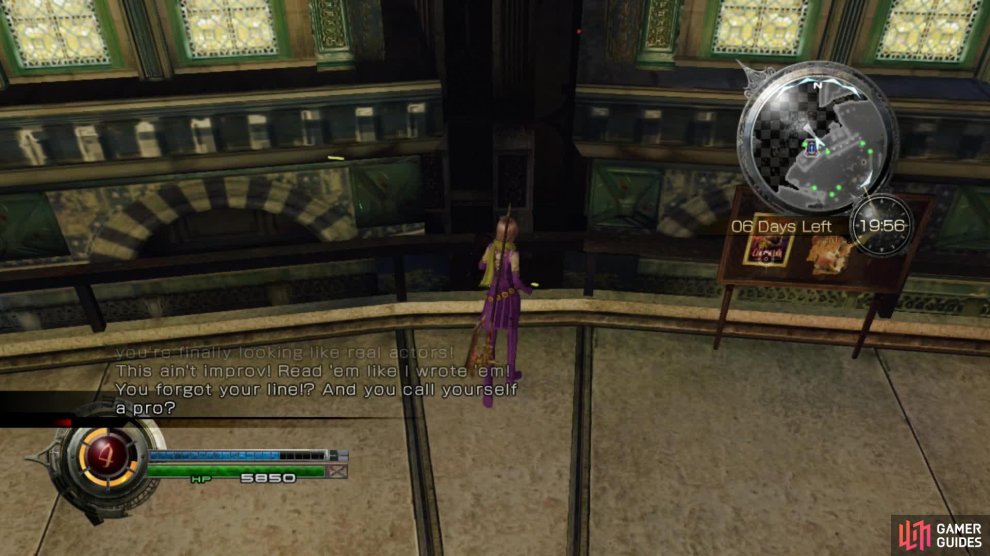 Talk to the Fireworks Boss when you’re ready and he’ll hand over a note with instructions to the other technicians who will then give you their fireworks. There are four locations but they are not the only ways of getting fireworks. You can get more from the four Chocobo Girls around the city and quite a few from a small sidequest “ Fireworks For A Steal ". Before you leave the Augur’s Quarter, don’t forget to pick up the Thorn of Will and the Demon Earrings .

You need a minimum of ten fireworks before 12:30am but you should use Chronostasis throughout most of this section. We’re aiming to finish this section with enough time to take a quick trip back to Luxerion so always watch the clock and apply Chronostasis when it runs out. Fight as many fights as you can to keep your EP topped up.

Leave the Augur’s Quarter and head down the alley next to the Tour Guide to find the first Chocobo Girl . You need a passcode to get the fireworks and it can be found on the flier stuck on the wall nearby. After examining the flier, speak to the Chocobo Girl to obtain a firework. Note that speaking to all Chocobo Girls rewards you with the Miq’ote Garb . 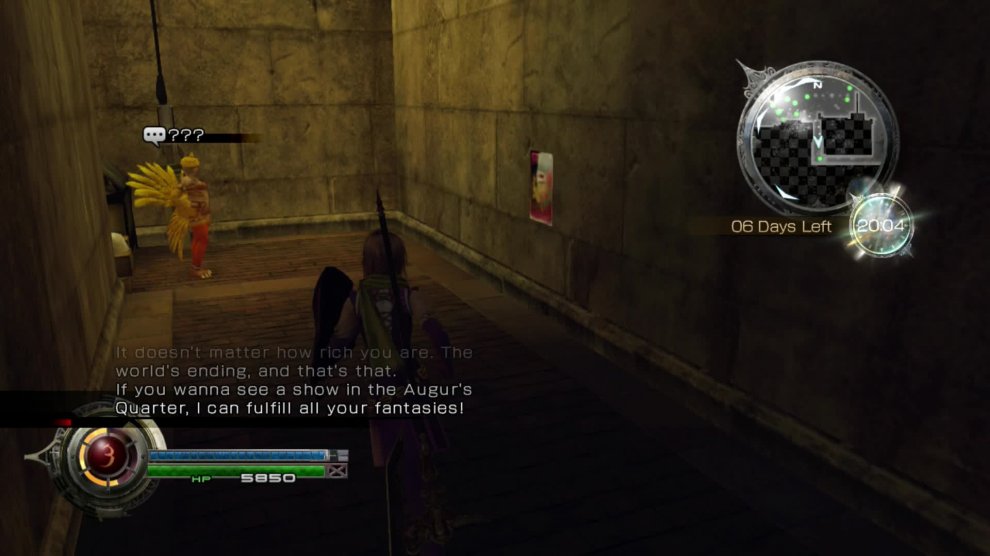 Did You Know? - The Miqo’te are a race from Final Fantasy XIV: A Realm Reborn. They are a very agile, cat-like people who are known for their hunting and fishing. They make excellent Archers and are expert hand-to-hand specialists.

Your next destination should be the first technician location by the Cactuar Statue. Talk to him and he’ll give you three fireworks. Head to the next technician at the top of Central Avenue. This guy is totally wasted and is a bit of a jerk. He won’t give up his fireworks unless you bring him a special drink; Bacchus’s Brew for the quest “Fireworks in a Bottle ”. It costs an eye-watering 1000 Gil too. As tempting as it is to just kick him in the crotch and take the fireworks, we should just do what he says. You must complete this quest now as it is only available during this section.

At the entrance to the Road to War, you will find a man wearing a funky headdress. He has a quest for you “ Fireworks For A Steal ”. There is a potential 7 fireworks to be had if you complete this quest so indulge him. When you have completed the quest, take the Road to War to the Champion’s Quarter. 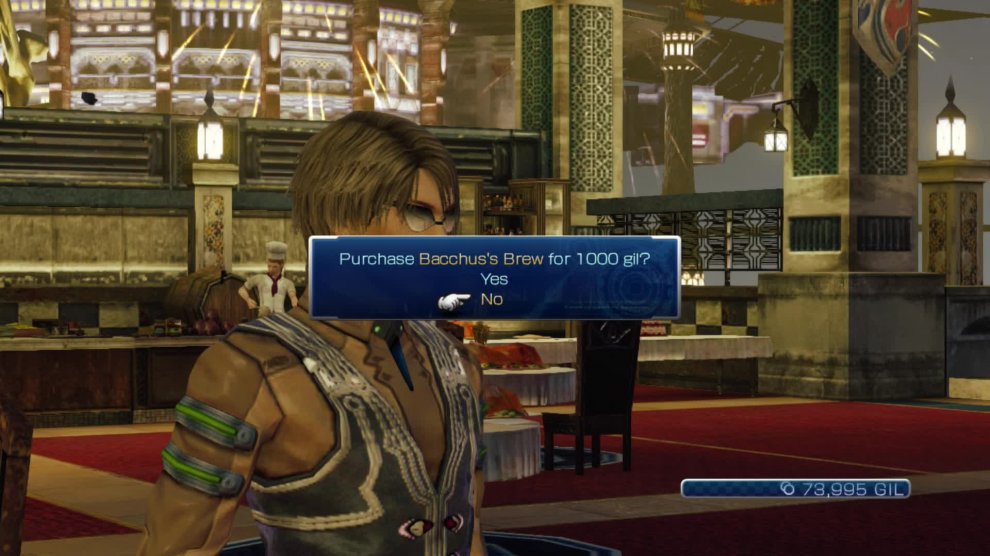 There is another fireworks technician though it is not marked on the map. He is found on the left as you enter the Champion’s Quarter from the Road to War. After collecting his fireworks, go out the eastern exit to find the final Chocobo Girl next to the Forge. You will receive fireworks and the Miqo’te garb for your troubles. On your way back to the boss, hand in the Bacchus’s Brew to the crazy drunken man. You have finally collected all the fireworks you possibly can so return to the boss.

Once you have handed over the fireworks, talk to the Director again to find out you need an outfit for your on-stage debut.

The Fighting Actress and 5-5 Battles Bounty

After speaking with the Director, rush to the Slaughterhouse. Speak with Zoe about the costume and she’ll explain you must win three fights. Each fight grows in difficulty though none of them are particularly hard at this stage. 10 minutes of time will be used for every fight and any Chronostasis active will be stopped automatically. The quest “ The Fighting Actress ” will start after the explanation. After completing it you will then receive the Midnight Mauve garb for the show. This garb has a very powerful Fira ability locked into it so it will come in useful later on.

You should now receive the Angel of Salvation achievement/trophy for completing 25 sidequests.

Before you rush off, speak with Zoe and fight another Zaltys to obtain the Fragment of Courage for quest 5-5. Run to Yusnaan station and board the train to Luxerion because now you have a few hours to spare and there is a missable quest in Luxerion to complete. 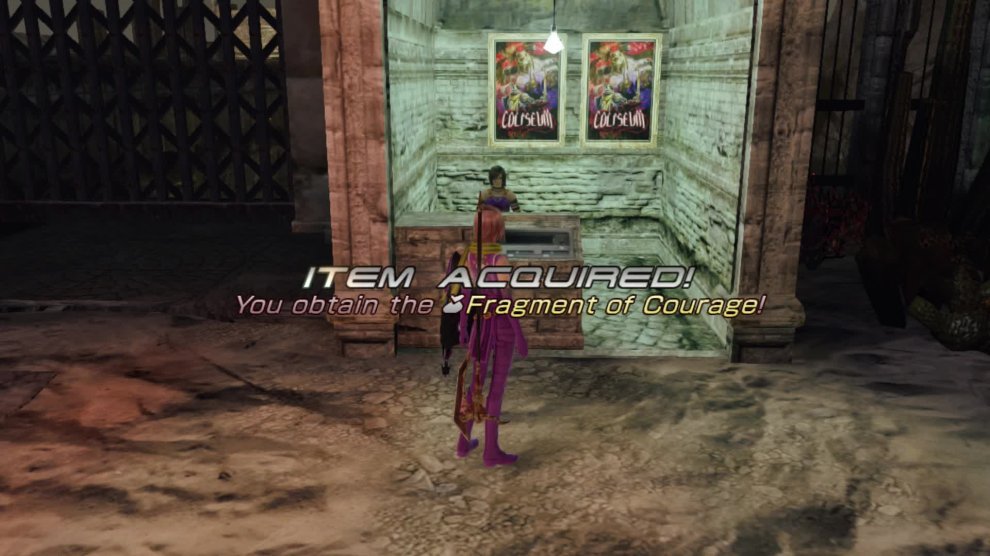 “ The Girl Who Cried Wolf ” is a sidequest that must be undertaken within 24 hours of defeating Noel and completing 1-5. Each phone call must be answered within 24 hours of the last one but it is much easier to complete it all in one sitting. The quest takes you around Luxerion so use Chronostasis if time is tight. Remember, you must speak with the Director before 3am. You can activate a couple more sidequests if you like but we won’t be completing those just yet.

Once you have completed the sidequest, head back to the Augur’s Quarter in Yusnaan for the finale.