The Runelord is a fairly straightforward job class, as all of its abilities revolve around applying Runes to your weapons that will trigger elemental attacks when physically attacking. In order to unlock the Runelord job class, you need to find the Shrine of the Runeblade, which is a Danger Level 50 dungeon, and defeat the boss there. There is a Rune for each of the six main elements in the game. Only a single Rune can be applied at one time, so you won't be able to have both Fire and Ice Rune on at the same time. Also, they only hit once per attack, so boosting and attacking four times with a normal weapon will not trigger the Rune on each hit, as it only triggers once. However, Second Serving will make the Rune trigger twice if that support skill comes into play. 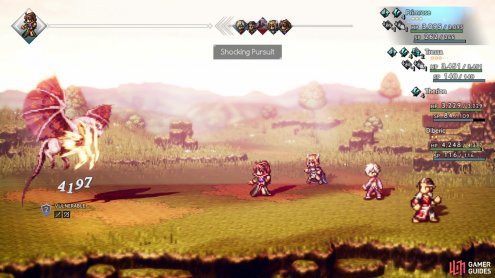 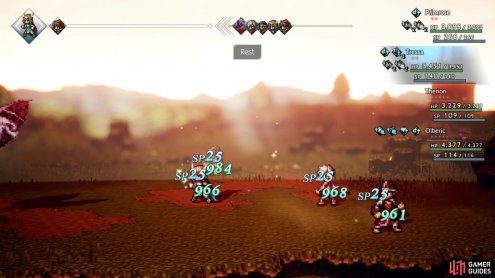 Normally, the Runes are self-cast only, but that's where the Transfer Rune skill shines. By using this skill first, you will be able to cast any of the Runes on your entire party on the Runelord's next turn. Of course, this extends to any self-targeting skills, like the Warrior's Abide/Stout Wall and the Merchant's Rest/Sidestep. While you can get the physical attack/defense buff elsewhere, Rest and Sidestep are unique and that makes one of the few choices for Runelord ideal for someone like Tressa. With Tressa as a Runelord, she can make pretty much any physically-based encounter a joke. The Divine Skill, Balogar's Blade, will hit a single enemy with six attacks, with each hit taking on one of the six elements.

The support skills for the Runelord aren't anything to write home about, as they are all kind of mediocre, except for the last one. Stat Swap will swap the character's elemental and physical attack with each other; you're lucky to not bother with this because if you built a character one way, you're not going to want to swap those stats. SP Recovery makes it so you regain a small amount of SP upon taking damage from a foe. Dauntless will increase your physical and elemental attack whenever you have an ailment put on you. The final support skill, Elemental Edge, will place a permanent elemental attack and defense buff on that character.