It goes without saying that the Starseer is a pretty big support class, with a little bit of a magical focus, but not as great as the Sorcerer. In order to obtain this job class, you will need to venture to the Shrine of the Starseer and defeat the boss within. Shooting Stars is a three-hit elemental attack that deals wind, light and dark damage to all foes, in that particular order. It’s a nice attack, albeit with a relatively high SP cost, especially when you try to compare it to the Sorcerer’s elemental spells, which hits thrice for the same element. BP Boost is great, especially coupled with the Dancer’s Divine Skill, as it will greatly increase your BP gain during combat.

Divination increases a single ally’s critical hit rate for two turns, which isn’t that good, considering you have the Hunter’s one skill that also increases accuracy, and for the entire party (all for 17 less SP). On the opposite end, Starsong is a fantastic buff, as it increases a character’s physical/elemental defense, speed and evasion for two turns. Celestial Intervention is another good buff, as it allows you to either stop enemies from buffing themselves with attribute-based ones or stop your characters from receiving attribute-based debuffs, but this can be considered situational and only really useful for bosses. Ethereal Healing should be used in every big encounter, since you don’t have to do anything else to make it viable. 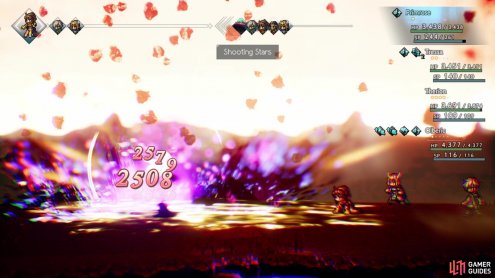 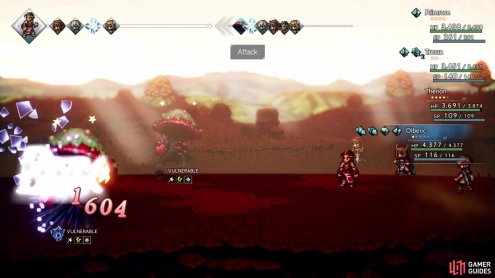 Moon’s Reflection, despite the name, only allows you to counter physical attacks and not reflect them. At the point where this might become viable, there might not be too many bosses left to make it work. The Starseer’s Divine Skill, Steorra’s Prophecy, is an elemental attack which strength is determined by the amount of BP your entire party currently has. Naturally, if everyone is full, then it will do a lot of damage, but if barely anyone has BP, then it won’t do a lot of damage. There are far better Divine Skills for damage out there.

On to the support skills, Hard Worker is a 50% base increase to all JP earned for the entire party, and not just the equipped character. This means you only need a single character equipped with it, plus it also stacks with the Badge of Friendship accessory gotten from completing the Friends Again Side Story. Boost Start will have you start with a single additional BP in battle. BP Eater makes it so boosted skills will deal additional damage, which will be great for any character that is meant to do damage. Divine Aura will give the equipped character a 25% chance of nullifying any damage done to him/her, which sounds good, but there are better support skills out there to not waste a slot with this one.