There isn’t really much to say about the Cleric job, other than that it’s the main healer class in the game. It is the main job of Ophilia and the secondary job shrine is located in Western Stillsnow Wilds. Both Heal Wounds and Heal More heal the entire party, so you don’t have to worry about only healing a single ally. Outside of healing, the Cleric has light-elemental nukes with Holy Light and Luminescence, which are single-target and all-enemies, respectively. While the SP cost is steep, Revive does cover the entire party, although it only brings them back with 1 HP unboosted.

You also have two buffs with the Cleric, Sheltering Veil for elemental defense and Reflective Veil to put up a barrier that will reflect back one elemental attack. The latter will help out immensely in some of the later fights in the game. The Cleric’s Divine Skill, Aelfric’s Auspices, allows the recipient of the skill to have a special attack/skill trigger twice without expending any more SP. As an example, you cast the Divine Skill on Olberic and he uses a fully boosted Cross Strike. Instead of just using that once, Olberic will use it twice, both fully boosted, for the base 12 SP cost. Note that it doesn’t work on other Divine Skills, so you can’t use it to cast another Divine Skill twice. 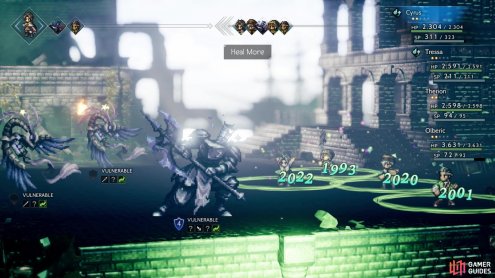 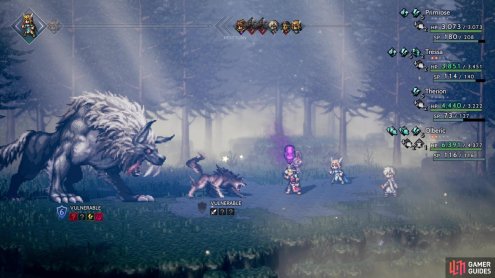 The Cleric has some pretty good passive skills, as they all have uses throughout the game. Persistence makes it so all buffs you receive will last for an additional turn. As an example, the Cleric’s own Sheltering Veil only lasts for two turns when cast, but with Persistence, it will last three turns. Inner Strength increases the maximum SP of a character by 50, which is good for casters. Evil Ward makes it easier to escape from battles, although it is nota guaranteed 100% flee chance. The best passive, though, is Saving Grace. This passive allows you to heal a character past their maximum HP, shown as green numbers. Note that the maximum HP you can have is 9,999 and once you’ve healed past the maximum, then you have to wait until your HP goes below your normal max threshold before you can heal past it again (it doesn’t accumulate once past it).